Quotes because you might not find it counterintuitive, Self-Esteem Development From Young Adulthood to Old Age: A Cohort-Sequential Longitudinal Study: 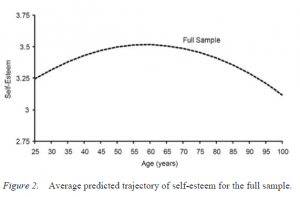 As a person well under 60 but slowing walking in that direction I'm pretty heartened by this. On the other hand, I'm one o those people who also tend to think that "self-esteem" is a bit overrated, so I'm not that heartened. Via Randall Parker