In a new paper called Molecular fMRI, MIT researchers Benjamin B. Bartelle, Ali Barandov, and Alan Jasanoff discuss technological advances that could provide neuroscientists with new tools for mapping the brain. Currently, one of the leading methods of measuring brain activity is functional MRI (fMRI). However, as Bartelle et al. note, it has its limitations:

Because brain activity mapping with fMRI depends on neurovascular coupling, resolution at the level of single cells is out of reach... More importantly, the cellular origins of functional imaging signals are obscured by the fact that many different cells and cell types contribute simultaneously to the observed fMRI data.

Recent work, however, holds out the hope that a future "molecular fMRI" could be developed to extend the power of fMRI. They say that molecular fMRI would be

A hybrid of molecular imaging with fMRI in which targeted molecular probe-mediated readouts form the basis for functional brain imaging. Molecular fMRI could eventually enable noninvasive functional neuroimaging with molecular specificity to be performed across multiple brain regions in animals ranging from rodents to nonhuman primates, and perhaps even eventually people.

Molecular fMRI would involve the use of a molecular probe, a form of 'contrast agent', which would modulate the MRI signal in response to specific conditions. Now, in a sense, all fMRI is molecular, because fMRI is based on the BOLD response which is driven by changes in the magnetic properties of the haemoglobin molecule when it binds oxygen. BOLD is thus a molecular proxy for oxygen consumption. What Bartelle et al. are saying that neuroscientists don't have to content themselves with haemoglobin as a contrast agent. We can design our own agents with more desirable properties, like BM3h-9D7, and thus - in principle - map any molecule we like, in real time. For instance, Bartelle et al.'s group recently developed a dopamine-sensitive, MRI-visible probe, a protein called BM3h-9D7. When this engineered protein binds to the neurotransmitter dopamine, its magnetic properties change, and this in turn affects the MRI signal. The probe thus allows MRI imaging of dopamine release, something that conventional fMRI can't do. 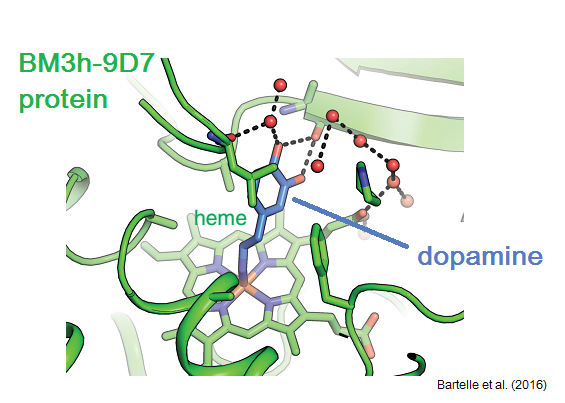 As they put it,

With advances in molecular probe technology, one could imagine a future in which molecular fMRI is used to determine brain-wide neurochemical maps corresponding to a universe of stimuli and behavioral programs. In animals and eventually people, such methods might provide fundamental insights into the relationships between neurotransmitter release patterns and cognitive phenomena, affective states, and diseases, with resolution perhaps approaching the level of individual cells.

Bartelle et al. discuss other emerging technologies, such as the use of the magnetic iron-containing protein ferritin as a reporter gene, to allow the expression of a target gene to become detectable using MRI. This idea has been around for a while, however, and Bartelle et al. note that challenges remain in turning this into a useful method.

The technology is still rudimentary, but there are a number of promising directions for future research, in particular involving the development of improved chemical and genetic MRI contrast agents for imaging neurotransmitters, calcium ions, and gene expression, as well as probes that detect previously unaddressed neurophysiological parameters, such as membrane potential. The overarching need is for imaging agents that offer better sensitivity than currently available, and for effective strategies to deliver these probes to their sites of action in cells or brain tissue. Advances in these two areas will be critical to the potential use of molecular fMRI methods in human subjects

In my view, while the dopamine/BM3h-9D7 study was an exciting proof of concept, I can't see this approach being used in humans any time soon. For one thing, as Bartelle et al. note, it would involve introducing an artificial protein into the brain, which would be difficult to achieve. Even if it were possible, it might not be considered a safe and ethical procedure to perform this for research purposes.