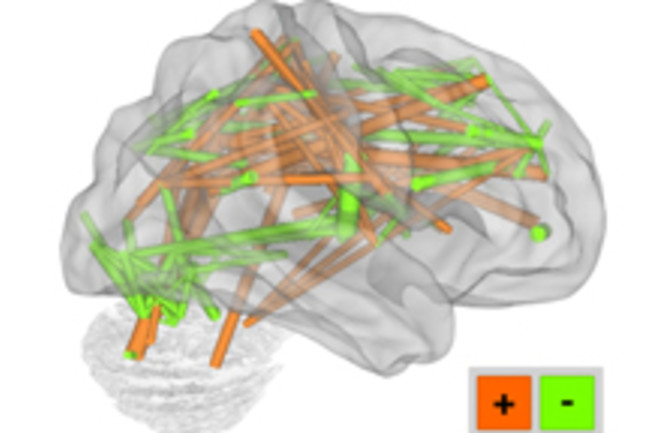 Your pencil marks on the door frame mark your kids' ascending height; your photo albums carry the visual record of their ascending ages. Scientists have figured out a new way to track growing up: studying the normal evolution of connections between parts of the brain as a person ages toward adulthood. If advanced far enough, such a method could even help to catch developmental disability. In a study out this week in Science, the team led by Nico Dosenbach outline the technique based on functional connectivity MRI, or fcMRI. Where the MRI scans we cover more frequently typically reveal brain structure or activity in a particular region, fcMRI focuses on the connections across the brain.

In this early test of the system, Dosenbach and his colleagues say they could differentiate a child's brain from an adult's more than 90 percent of the time simply by looking at the connections. Comparing adults to adolescents, they got it right three-quarters of the time. Here's why it's important: As people age from child to adult, the general trend in the brain is to move from from a host of links going every which way to fewer total connections, but longer and stronger ones. If a system like Dosenbach's could be refined so the scan places a person's brain on that curve with great accuracy, you might be able to see places where a person's brain maturity lags behind their body maturity. Dosenbach says that could be a tool to help pick out developmental disabilities like autism

Many children with severe behavioral or learning problems get traditional MRI, Dosenbach says. But their scans usually appear normal, he says. That's because the problem isn't usually with the brain structures themselves. Instead, the trouble comes from the way those structures are communicating with each other. [NPR]

But could this technology have darker ramifications? The Washington Post

is all atwitter about the unintended consequences of possessing the power to gauge someone's mental maturity:

Will overly anxious or competitive parents demand that their children be tested to see how they score compared with their peers? Or to help them decide whether children are mature enough, for example, to leave home for college? Will online dating services offer brain scans rating the maturity of potential mates? Will defense lawyers try to use scans to prove their young clients aren't mature enough to be tried as adults? Or will prosecutors cite the scans to prove the opposite? [Washington Post]

this year attempting to enter fMRI scans as evidence as court. Related Content: DISCOVER: How Autistic Artists See the World

(PHOTOS) DISCOVER: The Pugnacious Paper That Aims To Turn Neuroscience on its Head