Having trouble with a word puzzle? Suffering from writer's block? Perhaps you're not looking at the right colour...

We encounter many of the colours in our lives under the same circumstances and as a result, we have come to associate certain colours with specific attributes. Red invokes thoughts of action, danger or mistakes because it is a common feature of warning signs and editorial ink. Blue, however, is a more soothing hue, and its presence in both sky and sea have connected it to peace and openness.

These associations aren't trivial ones - they can affect the way we think. In a clever series of experiments, Ravi Mehta and Rui Zhu from the University of British Columbia found that red makes people averse to risks, more vigilant and more attentive to detail. Blue hues, on the other hand, encourage them to explore and try new things, and boosts creative thinking. These influences come through in tasks as simple as solving anagrams and memorising words, and as complex and realistic as creating a child's toy.

To begin with, Mehta and Zhu checked that the associations they ascribed to the two colours were right. They asked people to list things they connect with different colours and found that 70% of their red associations were related to danger or mistakes, while 60% of their blue ones were to do with safety or peace. Idea confirmed, Mehta and Zhu went on to show that these feelings trigger different motivations - dangerous red says "Avoid," while tranquil blue says "Approach."

They recruited 69 volunteers who completed 12 anagrams on a computer. When the monitor background was red, the recruits were quicker at unscrambling words related to avoidance (such as "prevent") than those related to approach (such as "adventure") or neutral ones (like "computer"). If the background was blue, the avoidance words proved to be more troublesome. And with a neutral white screen, all of the anagrams were just as easy as one another.

In the second task, different volunteers read descriptions of three pairs of products, again in front of differently coloured backgrounds. In each pair, one brand was described by highlighting desirable features while the other focused on avoiding unwanted outcomes. One toothpaste brand talked about teeth whitening (approach) while the other focused on preventing cavities (avoidance). One brand of car boasted style and performance (approach), while the other talked up its safety features (avoidance). Mehta and Zhu found that recruits were more likely to choose brands described in terms of desirable features if they saw blue backgrounds compared to red or neutral ones.

In both studies, the central idea is that exposure to one colour or the other primes a person's brain with certain motivations, which bias their response times or their preferences in the later assignment. Next, Mehta and Zhu showed that these biases actually affect people's abilities at different sorts of tasks.

Over a hundred fresh volunteers studied a list of 36 words for a few minutes and tried to list as many of them as possible after a 20 minute gap. It's a task that requires attention to detail and indeed, the recruits did better with a red background than a blue or neutral one - they remembered more words and made fewer incorrect guesses. In a similar way, the red group did better at a proofreading test.

Blue backgrounds, however, led to better scores in tasks were creativity, rather than detail, was the skill most in demand. Another hundred volunteers were given a minute to think of as many possible uses for a brick as they could, without saying anything typical or impossible. With imaginations stirring, the blue group outperformed the red one. Likewise, they did better at a "Remote Associates Test", where they had to come up with a fourth word that was related to three others (e.g. "Book" is linked to "Shelf", "Read" and "End"). 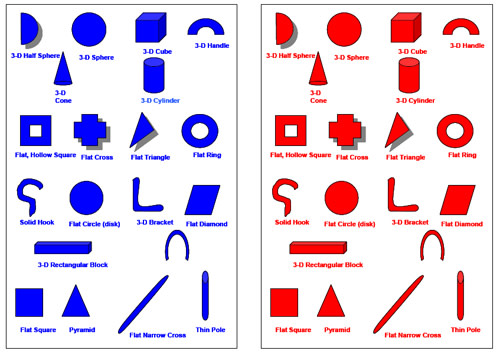 For their next trick, Mehta and Zhu used a single task that combined elements of creativity and attention to detail. A new set of students were shown a set of 20 shapes (all either red or blue) and asked to use any five to design a child's toy. Twelve judges saw grayscale versions of the designs and rated them in terms of practicality and appropriateness (reflecting attention to detail) and originality (representing a creative streak).

Their judges' verdicts were largely in agreement - toys built from red parts were deemed more practical and appropriate than those built from blue parts, but less novel or original. This was a much stronger result than any of the previous experiments because of the fairly free-form nature of the task.

So red and blue affect different mental skills. Mehta and Zhu also showed that they can influence a person's preferences. They asked people to judge two versions of an advertisement for a lightweight digital camera. One focused on specific product details like accessories, while the other only showed generic images with a travel theme, such as maps or road signs. If the ads appeared against a red background, the "customers" were more strongly influenced by the detailed version. Against a blue background, the ad with the more tenuously linked visuals was the one that stood out. 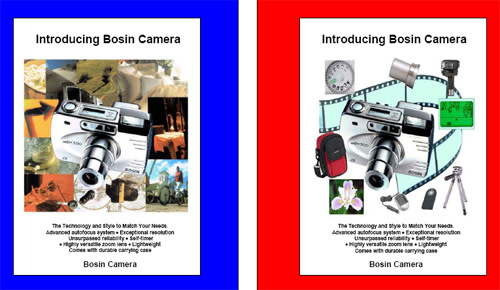 Finally, the duo showed that people ­aren't actually aware of these effects. They told students that they were about to complete a test that required "detailed, careful and systematic processing of information". Their job was to choose a background colour - red or blue - that would enhance their abilities. Next, they were told that a second task would require "creative, imaginative and outside-of-the-box thinking", and again they had to pick the most suitable colour. In both cases, the majority of volunteers (66% and 74% respectively) chose blue backgrounds, even when the task demanded an eye for detail.

Mehta and Zhu's work helps to resolve some disagreements between earlier studies. Many of these found that people fare better in mental tasks under the influence of red than they do with blue or green; others found exactly the opposite. This new study shows that the effect of colour depends on the type of tasks that people are asked to do, and what skills they test.

The implications of this research are remarkably wide, and they suggest that people could use the psychological power of colour to give them an edge in different settings. If detail is all-important, say if you have to memorise a list, choose red. Red would be particularly appropriate if you want to focus someone's attention on details while bringing avoidance to the front of their minds - on a quit-smoking leaflet, for example. On the other hand, if you want to bring out your creative side, blue may be the better option. Perhaps it's the better colour for art workshops or meeting rooms.

And as with many psychological studies, this raises more questions than it answers. What of situations where both skills are needed in equal measure, like a school? ARe there any negative mental side-effects of red or blue that might outweigh the benefits they instil? And what psychological effects do other colours stir?