We humans are slowly starting to grasp the limits of our intellectual superiority, particularly with respect to chimpanzees. Just in the past year, scientists have caught chimps hunting with spears, passing on cultural traditions, displaying altruism, and beating college students (at least some of whom were sober) at memory games. Now, a new study in Current Biology shows they may actually have the capacity for a communication system far more complex than we thought. 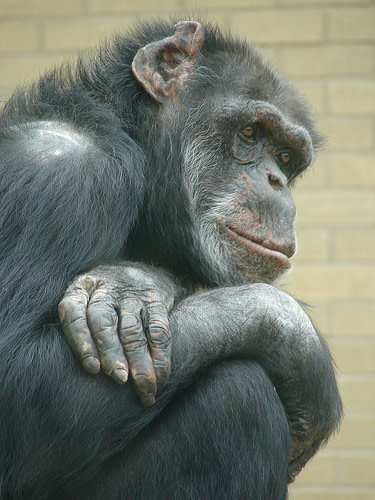 Anyone who's been to the primate paddock of their local zoo knows that chimps are noisy beasts. But scientists always assumed that their vocalizations were more of an emotional or visceral response—e.g. "I'm hungry," "let's fight," "you scratch my back, I'll scratch yours," and "sex now." But recent studies by a research team led by Jared Taglialatela at the Yerkes National Primate Research Center found that their brains have the neurological basis for more nuanced communication. Taglialatela scanned the brains of three chimpanzees as they gestured and called to a person for food. Those chimps showed activation in the brain region corresponding to a region in humans called Broca's area—one of the two "language centers" of the brain. Broca's area is essential for producing language and understanding grammar—it becomes activated not only while we speak, but also while we listen to and comprehend what other people say. Scientists knew that chimpanzees have a region analagous to Broca's area, but it was unclear whether they actually used the area while communicating. (Chimps also have a region analogous to the other language center in the human brain, Wernicke's area, which helps receive language and decipher its meaning.) Because Broca's area is involved in the complex components of human language, its activation during chimp communication sheds light on the evolutionary origins of language. According to the paper, chimps have a "language-ready brain," suggesting that the roots of human language may lie in the common ancestor of chimpanzees and humans rather than being a feature exclusive to the human lineage.