Can Playing Tetris Ease the Symptoms of Post-Traumatic Stress? 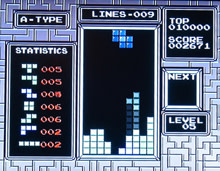 Playing the absorbing video game Tetris immediately after a traumatic experience could reduce the most jarring symptom of post-traumatic stress disorder (PTSD), the flashbacks in which the distressing memory invades the brain. In an odd new study, researchers showed volunteers

ugly images of nasty accidents, crushed-up skulls and bloody entrails from various sources. Then they asked half of them to play Tetris. While the other half apparently did nothing.... The Tetris players apparently suffered significantly fewer nasty memories of those ugly images than did those who were left idle [CNET].

The Tetris players may have experienced fewer flashbacks because they were distracted during a crucial window of opportunity, the few hours after the traumatic incident when the brain is consolidating the memory. Says lead author Emily Holmes:

"We wanted to find a way to dampen down flashbacks - the raw sensory images of trauma that are over-represented in the memories of those with PTSD. Tetris may work by competing for the brain's resources for sensory information. We suggest it specifically interferes with the way sensory memories are laid down in the period after trauma and thus reduces the number of flashbacks that are experienced afterwards" [BBC News].

Playing Tetris could be considered a "cognitive vaccine" against flashbacks, Holmes suggested. Researchers say they used Tetris in the experiment because the game, in which colored blocks are manipulated and slotted together, uses a large part of the brain; anyone who has played the game obsessively can also tell you that the patterns of falling shapes linger in the memory. Holmes says she doesn't know whether other video games would have a similar effect. Holmes acknowledges that the study, published in the journal PLoS ONE, can't easily be applied to real-world situations. The game would have to be played immediately after the traumatic event, and it's unlikely that soldiers in war zones or patients in intensive care units would be able to whip out a video game player. But Holmes says the experiment still has value:

"This was a pure science experiment about how the mind works from which we can try to understand the bigger picture. There is a lot to be done to translate this experimental science result into a potential treatment" [Telegraph]

, she says. Related Content: DISCOVER: Curing the Wounds of Iraq With Virtual Therapy DISCOVER: Stress and Your Brain goes deeper into the aftereffects of trauma

Why Small Talk Is Good For You