Bringing Biohacking to the Masses 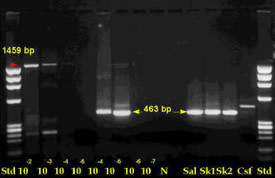 When you consider the term “open source,” “molecular biology” and “genetics” are probably not the first words to pop into your head. It far more likely evokes images of a bespectacled group of computer whizzes hammering away at their machines or that of the cute Linux penguin. By contrast, “molecular biology” and “genetics” calls images of a busy laboratory with instruments humming in the background and white-coated scientists shuffling around, beakers in hand. Josh Perfetto and Tito Jankowski, a team of self-styled “biohackers” based in San Francisco, aim to change all of that with their ambitious OpenPCR

project. As the name implies, Perfetto and Jankowski want nothing less than to turn PCR (which stands for “polymerase chain reaction”), a fairly complex but crucial tool of molecular biologists, into an accessible hobby by creating a design for a cheap, easy-to-use machine--$400 or less--that anyone can build using just spare parts. (By comparison, a conventional PCR system can easily cost over $5,000.) Researchers use PCR to generate thousands to millions of copies of a single, or several, pieces of DNA, which comes in particularly handy when you mostly work at the cellular level.While it has little to do with computers or software, their project draws extensively on the “open source” mindset by harnessing the creative juices and resources of the community at large - granted, a smaller, more scientifically versed community. To tap into this pool, Perfetto and Jankowski have turned to Kickstarter, where they have managed to raise $4,706

(as of posting time), very close to their $6,000 target, in less than 2 weeks. For a variety of different pledge levels, you can get anything from a simple set of stickers ($8 pledge or more) to a one-of-a-kind DNA Lego model designed by Dawei Lin

($512 or more), a bioinformaticist at UC Davis, on the higher end. With a prototype already up and running, they hope to have a near-final version completed by the fall. The money they raise will be used to further refine their design, test it, and optimize its components. Once they’re done, they plan on releasing all the designs, software coding, parts lists, and instructions to allow any aspiring biohacker to build it himself. From the project description, it’s clear that these bioentrepreneurs hope to capitalize on the recent flurry of interest in synthetic biology sparked by Craig Venter’s synthesis of an artificial genome

and other likeminded endeavors. While their goals are commendable, it remains to be seen how easy it will be in practice to run samples on this DIY machine from the comfort of your office or garage. For a start, you’d need to buy all the necessary accessories--your pipettes, tips and other basic plasticware--and have, at the very least, a rudimentary knowledge of molecular biology. Those parts can all be readily purchased and that knowledge acquired with study, of course, but there is a definite price of entry that could scare off all but the most hardcore. And, like all labwork, it can take months, if not years, to make even the most infinitesimal progress; recall that it took the Venter team over 7 years to lay down the foundations for the synthetic cell they created. Could this project or other open source biology initiatives, like BioBricks

, help produce the Bill Gates or Steve Jobs of the synthetic biology world? It’s definitely possible. While I’d still expect the next breakthrough to originate from a university research group or other brainy, well-capitalized organization, like the J. Craig Venter Institute (JCVI

), I wouldn’t put it past one of these biohackers to at the very least come up with the idea that gets this next-generation biology revolution going.