In martial arts classes, students are often taught to treat weapons as extensions of their own body. But this is more than just a metaphor. It turns out that when we use tools - not just swords and spears, but toothbrushes and rakes as well - our brain treats them as temporary body parts. 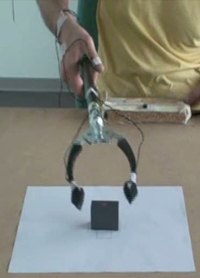 According to some psychologists, our brains rely on a mental representation of our bodies called the "body schema", which allows us to coordinate our various parts and to interact with the world around us. Now, Lucilla Cardinali from INSERM, France has found that we incorporate tools into this mental plan after using them for just a few minutes. It's confirmation of an idea that has been kicking around for almost a century.

She recruited 14 volunteers and asked them to grab a block in the middle of a table, that was always the same distance away. Then, they had to repeat the same actions with a grabber - a long, mechanical lever tipped with a two-fingered "hand" - and then a third time, with their own hand again.

Small LEDs on the volunteers' hands allowed Cardinali to track their movements and calculate the speed and acceleration of their arms. She found that they reached for the block differently after they had been accustomed to the grabber, taking longer to accelerate their hands more slowly and to seize the block (although once they actually touched the blocks, they grasped them in just the same way as before). The delays even affected the speed at which they pointed at the block, a behaviour that wasn't "trained" by the grabber.

To Cardinali, these results suggested that after using the grabber, the volunteers' had included it into their mental representation of their own arms. Because of that, they felt that their arms were longer than they actually were and reached for the block more slowly. 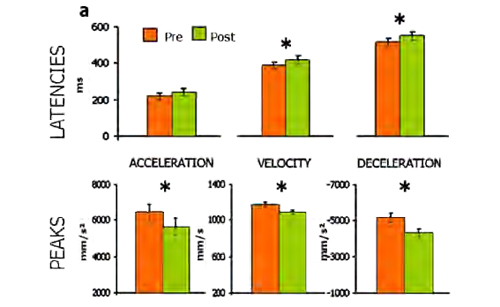 Before accepting that interpretation, Cardinali had to rule out the possibility that they were simply a bit more tired in the second session. To do that, she repeated the experiment with another group of volunteers who used a grabber while their wrist were weighed down with 300g weights. Despite the extra load, this group of volunteers showed the same changes as the previous lot who used the lighter tool - clearly, their delay wasn't affected by the weight of the device, but the fact that it was used in the first place.

But the clearest evidence for Cardinali's theory came from a final experiment, where she touched the volunteers on their wrist, elbow or middle finger and asked them to use their opposite index finger to point directly above the point of contact. This simple request showed that after using the grabber, the volunteers overestimated the length of their arm. Their pointing fingers indicated a larger distance between their fingertip and elbow, or between their wrist and elbow, than they did before they had used the tool.

These studies show that our brains are quick to update our body schemas when tools fall into our hands, and that the revised representations last for at least 10-15 minutes. This ability to quickly treat tools as our own body parts probably underlies our vaunted aptitude with tools.

Reference: To be published in Current Biology