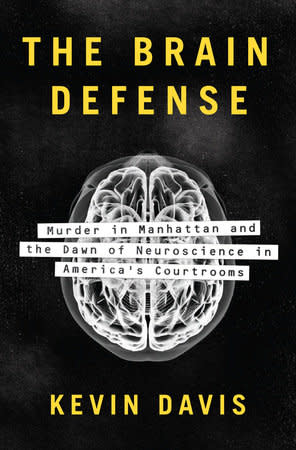 Can neuroscience help courts to decide how criminals should be punished? Is moral responsibility, or the lack of it, visible on a brain scan? In The Brain Defense (Penguin, 2017, on sale now), author Kevin Davis explores the growing use of brain images as evidence in American courtrooms. What Davis calls the "brain defense" is the strategy of using evidence of apparent brain abnormalities as a mitigating factor when defendants are convicted of violent crimes. If someone's brain isn't working properly, the logic goes, then they can't be held fully responsible for their actions, and shouldn't be punished as severely. Over the past 20 years, the use of neuroscience in court has grown, to the extent that today, defendants have succesfully claimed 'ineffective assistance of counsel' because their lawyers didn't order brain scans. It's a fascinating and important issue, and The Brain Defense is an excellent and balanced account of it. Davis discusses several aspects of the "brain defense" including its legal antecedants (the insanity plea), its modern manifestations, and special cases such as military veterans and sportsmen exposed to traumatic brain injuries (TBI). The bulk of the book, however, is devoted to the case of Herbert Weinstein, perhaps the first person to deploy the brain defence succesfully. In 1991, Weinstein killed his wife in their New York apartment with his bare hands. He had no previous history of violence. Weinstein confessed to the killing, but while awaiting trial for murder, it emerged that Weinstein was suffering from a large brain cyst, a fluid-filled space. 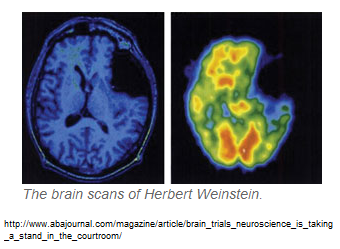 A subsequent PET scan revealed that Weinstein's brain metabolism seemed to be well below normal in the areas adjacent to the cyst, including the frontal lobes, known to be involved in impulse control. Weinstein's lawyer submitted the brain images as evidence to be put before the jury. The prosecutors contested this, but the trial judge eventually ruled that the images could be shown in court, although the defence would not allowed to tell the jury that the abnormalities were responsible for Weinstein's behaviour. In the end, there was no trial - Weinstein pled guilty to the lesser charge of manslaughter in a plea bargain. Davis does an excellent job of explaining the legal and scientific questions raised by the Weinstein trial and the subsequent 'brain defense' cases. The fundamental issue, or so it seems to me, is that it is impossible to know whether a given brain abnormality was responsible for a given criminal act. Neuropsychology is not yet a hard science. In Weinstein's case, for instance, most neuroscientists would agree that it's possible that a brain lesion affecting the frontal lobes could cause impaired impulse control and hence might have made Weinstein more prone to lash out during a stressful argument with his wife. Possible, but not certain. But while scientists might be content with possibilities, courts rarely are. If a scientist wants to be heard in court, they'll need to express an opinion on the particular defendant and the particular act in question. It turns out that there are plenty of experts who are willing to express the opinion that all kinds of brain abnormalities were at least partly to blame for defendents' actions, and no scientist can say, for sure, that they're wrong. So the 'brain defense' persists, although I think it goes beyond what many neuroscientists would say is the limit of their fields' real knowledge. --- Q&A: Kevin Davis kindly agreed to answer some questions about his book.

NS: Your book is called The Brain Defense, and it's very much about how neuroscience is being used to try to reduce sentences. Is there any evidence of the opposite phenomenon - brain evidence being used to increase confinement, or deny parole? If not, why not?

KD: I’ve seen no evidence that prosecutors are using brain scans to increase confinement or deny parole in criminal cases. In fact, I’ve never heard of a prosecutor brining in a brain scan of a defendant as evidence because that would likely require a court order and that might not even be possible. Scanning a defendant’s brain without his consent would probably be a violation of privacy and against the law. That doesn’t mean, however, that a prosecutor can’t turn around and use a brain scan submitted by the defense lawyer to make the argument that the person could be a future danger. Deborah Denno at Fordham University in New York published an interesting paper called “The Myth of the Double Edged Sword,” in which she made a strong case that rarely, if ever, does the issue of future dangerousness come up or that using neuroscience can sabotage a case [for the defense]. I found that surprising, but she reviewed two decades worth of cases. I have a feeling, however, that Herbert Weinstein was continually denied parole, in part, because he continued for years to cite his brain cyst and having affected his judgment on the day he killed his wife. I think it might have come back to bite him. NS: One thing that you reveal which surprised me was how brain-based defences have become routine and even expected e.g. in death penalty cases. It seems like a whole industry has sprung up here, but is anyone regulating it? Is anyone checking that these scans are done properly? KD: There’s no regulation I’m aware of that covers the use and accuracy of PET scans or fMRI scans. I believe the medical and scientific communities police themselves by publishing peer reviewed studies about medical technologies and their use in various settings. The battles over using brain defenses with PET or fMRI scans are waged in court. Each side, as you know, will have their own experts. They may have to go through Frye or Daubert hearings, in which a judge must determine (as the judge did in the Weinstein case) whether these scans and their meanings are generally accepted by the scientific community. It’s a tough standard to meet, and lawyers have had mixed success with it. NS: Your book focuses on the US legal system. Do you know if the brain defense is being used elsewhere? KD: From what I’ve seen the 'brain defense' is used much less often in other countries. I’ve heard of a few cases here and there, but there is no comprehensive source to gauge its popularity. Perhaps that will be my next book! The Brain Defense Around the World! (I just need to get someone to pay for my travels!). There was one case in India in 2008 in which a woman was convicted, in part, after a brain scan suggested she had knowledge of her crime. Highly unusual and not to my knowledge ever done again. Very controversial as you can imagine. There also was one case I heard about in Italy where a man who stabbed someone to death tried a brain defense and failed. It seems the US is at the forefront of this novel defense, but I wouldn’t be surprised if it begins to surface elsewhere.