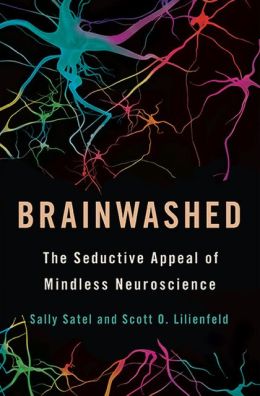 I wanted to dislike this book. You see, I was suspicious of the fact that one of the authors is a resident scholar with the American Enterprise Institute (AEI), an organization whose political values I oppose, and, insofar as it's an organization with political values, has little business going near science. Then, when I found that the book cites me (with fellow neurobloggers Mind Hacks and Neurocritic) in the Acknowledgements and elsewhere, that actually made it worse. A sense of intellectual possessiveness joined my ideological reasons for not liking the thing. I was hoping that it would be dreadful so that I could unleash the venom I had brewed up: "Ayn Rand, Please Get Off My Bandwagon"; "The only good bits here are the bits they stole from me" - it would have been glorious. However, sadly, Brainwashed turned out to be good. The book's subtitled "The Seductive Allure of Mindless Neuroscience", and it covers a range of examples of the modern mania about 'the brain'. The overselling and misinterpretation of neuroscience is everywhere, because - for some reason - we've convinced ourselves that the human brain, which has been working away quite steadily for 50,000 years, has suddenly become more important. Brainwashed begins with a brief introduction to fMRI scanning (because most, though not all, neurononsense involves it) and then takes us through 'neuromarketing', lie detectors, addiction, and what neuroscience means for free will, the law, and moral responsibility. These chapters outline several different ways in which, if we're not careful, misapplied neuroscience could cause real harm - in particular, in the justice system, as well as in medicine and business. The discussion is well-written and remarkably balanced; it doesn't make the mistake of throwing out the baby of neuroscience with the bathwater of hype. As for the AEI, there's no problem. This is one of the less political popular science books I can remember. It's 150 pages of solid content; there's no waffle here. In fact, I wished this book were longer, and it's not often that happens. This however brings me onto Brainwashed's main flaw. The reason I wished it longer is that the whole book felt like an introduction to something... but no, it just ends. What I was hoping for was more of a birds-eye view examination of what makes vulgarized neuroscience so attractive, and why it's wrong to use neuroscience in the ways that it is - fundamentally. We don't really get that. There's a few bits, but by and large it's about particular cases. Brainwashed offers a pleasant and informative walk amongst the trees. But it doesn't show us the wood. Should you buy it? Honestly, I would recommend it for anyone who doesn't heavily read blogs like this one. Those that do will likely be familiar with the names and ideas in here. But for new readers, or as a gift, it would be fantastic.