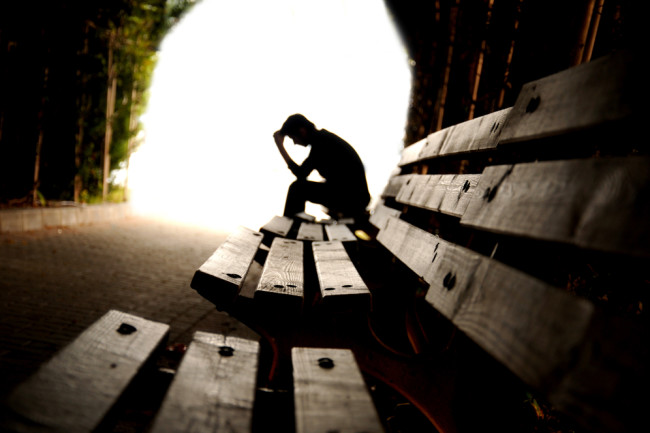 Individuals most intent on committing suicide are often the least likely to admit it. But soon, their blood may do the talking for them. Molecules in the blood appear to indicate an individual's current degree of suicidal intent, according to a study of bipolar patients in Indiana. Although the study's small sample of just nine Caucasian men makes the findings preliminary, the results could lead to a breakthrough in creating the first quantitative and objective tool for establishing an individual's suicide risk.

have suggested that one of every three bipolar-diagnosed individuals will attempt suicide. Over the course of multiple visits every three to six months, subjects provided blood samples and also received assessments of their mental state at the time, including suicidal intent and suicidal ideation, or preoccupation with suicide. From one visit to the next, subjects' suicidal intent and ideation levels ranged from low to high. Analyzing the subject's samples, researchers identified 41 enzymes and proteins whose levels appeared to fluctuate based on the degree of suicidal risk at the time. The molecules, or biomarkers, were discovered through a process known as convergent functional genomics, which involves amplifying the DNA in a blood sample to look for genetic evidence of the molecules' presence. Expression of an enzyme called SAT1 in particular was elevated when suicidal intent and ideation were high. SAT1 has previously been associated

with suicidal intent, anxiety and mood disorders. To compare the expression of SAT1 and other biomarkers in suicidal subjects with individuals who had committed suicide, researchers obtained postmortem samples from nine suicide completers, some of whom had a history of mental illness. Researchers discovered that SAT1 expression in all cases was significantly elevated, and was higher in suicide completers than in living subjects with suicidal thoughts.

While SAT1 and some other biomarkers were elevated when suicidal intent or ideation was high, other biomarkers, such as the protein CD24, decreased when the living subjects were assessed as highly suicidal. CD24 levels were also lower in the postmortem samples when compared to samples from subjects assessed as having low suicide risk. Although SAT1 displayed the strongest correlation between gene expression and risk, five other biomarkers remained associated with suicidal intent or ideation after the team performed additional rigorous statistical testing. The team also identified four biomarkers, including SAT1, for which a high baseline level may indicate a general predisposition to having suicidal intent and ideation, even if the subject is not currently suicidal. Researchers involved in the study

, published today in Molecular Psychiatry, note that development of an objective tool such as a biomarker blood test is crucial since suicidal individuals often will not disclose their intent due to fears of being stigmatized, hospitalized or thwarted. Clinicians today typically rely on an assortment of subjective tests and observation to determine risk of suicide, but these methods are often imprecise and poorly predictive. Today's published findings are the first to suggest the feasibility of a predictive test to assess an individual's suicide risk---and thus, hopefully, save some lives.Image by hikrcn / Shutterstock