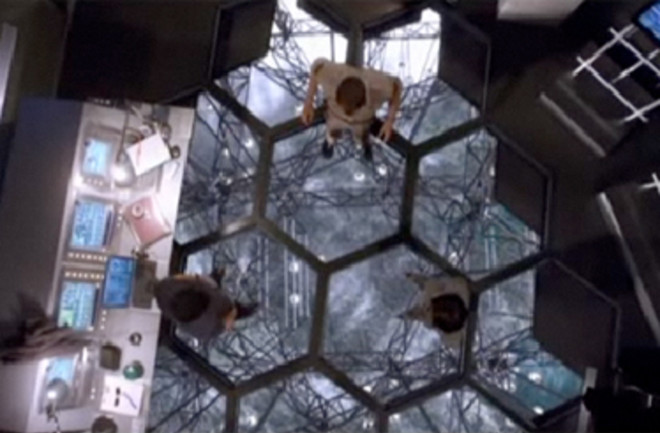 Last night's episode of Eureka, "What About Bob?" centered on Lab 27, a huge biosphere carved out of the rock underneath the Global Dyanmics research facility. The biosphere is a completely enclosed artificial ecosystem -- apart from energy and information, nothing is supposed to come in or out of the biosphere, not even air. All of the food, water, oxygen and so on needed by any inhabitants of the biosphere must be produced by biological processes that recycle every ounce of waste. Like most real-life attempts to construct biospheres, Lab 27 was built for the sake of research that supports human exploration of space. While it's perfectly possible to bring enough bottled air, food and water for a space voyage lasting a few days -- as was done in the early days of the space age -- for longer journeys the amount of supplies you would have to bring along would overwhelm the cargo capacity of any conceivable spaceship. Instead, recycling is the order of the day, as is done now on a limited basis on the International Space Station where oxygen is generated from waste water such as moisture in the air. Current recycling-based life-support systems use machines and chemistry. Ideally, for very long journeys -- or for setting up long-term bases on the Moon or Mars -- we'd like to use biology instead. Not only do biological systems have the capacity for self-repair and high-efficiency, they often can also be eaten, cutting down on the amount of food that must be brought from Earth. Hence all the interest in biospheres. (Incidentally, Isaac Asimov started talking seriously about this idea back in 1966, but he dubbed his self-contained ecosystems "spomes," short for "space homes," which never quite had the ring of "biosphere.") The Russian space program did a lot of early work on biospheres, but probably the best known attempt to create a biosphere was Biosphere 2, a huge structure constructed in Arizona that conducted a series of long-duration experiments in the 1990s. But as scientist and futurist Freeman Dyson described to DISCOVER, Biosphere 2 couldn't maintain a closed ecosystem and air and other supplies had to be brought in from the outside. Current research is focused on getting things right with less ambitious projects, such as the University of Guelph's project to develop small self-contained greenhouses that could provide astronauts with fresh vegetables in their diet and turn carbon dioxide into oxygen. In other news, it appears that the Eureka producers have started playing a reality-game game -- try calling the phone number on the cannister of film shown at the very end of the episode (by the way, the middle grouping is NH(zero) not NH(oh)).