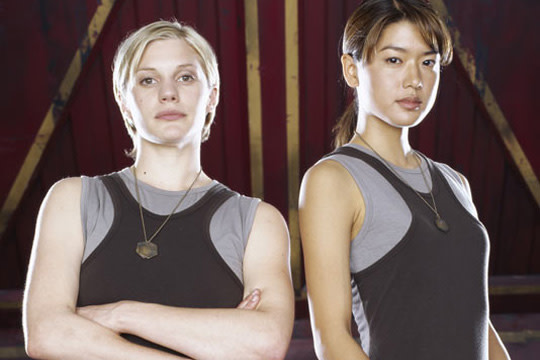 One of the best things about the final season of BSG has been that much of the annoying mysticism of previous seasons has now been explained by science. I'll admit it was convoluted TV show science, but at least it wasn't people seeing ghosts or having divine inspirations. The Chief being mysteriously pulled toward the Temple of Five? Turns out he was one of the aforementioned five and had been there before (my apologies if that's a spoiler for you, but really, catch up already). BSG is best when it revolves around people and politics, as opposed to the god(s) and the lost tribes of whoever. Desperate people, dirty spaceships and ragtag resistance movements? Gripping and relevant TV. President Roslin's visions and imaginary shamans? Not so much. When I saw Galactica's hull break open and the Six shoot into space, I was reminded of BSG science adviser Kevin Grazier explaining what happens when you fall out of a spaceship. We're hoping for a post from Kevin on the potential explanations for artificial gravity, but we appreciate that the show has a solid science adviser and appears to listen to him occasionally (no aliens, no time travel, real constellations). With all that in mind here are non-supernatural solutions for my five favorite Battlestar mysteries (note that these are suggestions not spoilers): 1) The Opera House - Roslin and Baltar are both part Cylon. If everything happening now has happened before, then it makes sense that human-Cylon hybrids happened before. Roslin and Baltar can project because they are descendants of the ancient human-Cylon combo. 2) Kara Thrace - An old school Cylon who resurrected after arriving on the irradiated Cylon "Earth." She's the "harbinger of Death" because her return means the end of resurrection and the return of natural reproduction for the Cylons. 3) Earth - Earth as we know it exists apart from the nuked Cylon Earth that the refugees landed on, thereby giving the refugees a final destination. 4) The Defeat of Cavil & Co. - One last rousing space battle for the old man and crew, with an assist from Sam Anders as the hybrid controller of Galactica. It's going to be awesome. 5) All Along the Watchtower - Bob Dylan is the creator of the ancestral cylons.

The SciencesAfter You Die, Your Body Could Be Turned Into a Diamond
Recommendations From Our Store