Babies Are Conscious of Faces at Just Five Months of Age 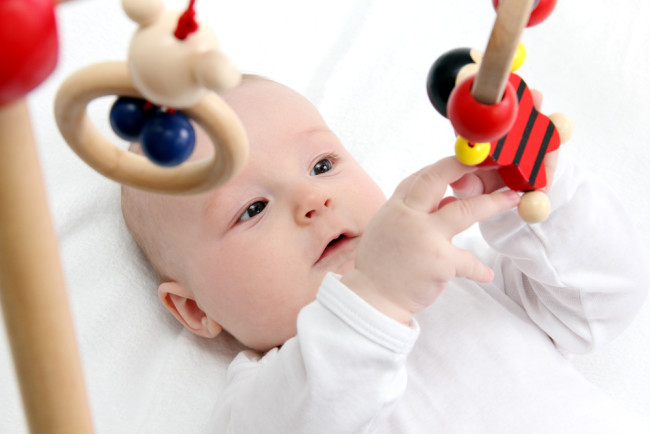 Most new parents are primed to watch for their baby’s first glimmer of a smile or the first sign he is tracking that toy spinning above him. Now researchers have used neural markers to establish that infants as young as five months are conscious of a visual image and can reflect on it. It’s been a tricky proposition for scientists to figure out when infants register consciousness. Babies can’t yet speak to indicate they’ve seen an image flash before them, and babies are difficult to train (though researchers have tried) to respond to stimuli as is done with monkeys. So a research team led by cognitive neuroscientist Sid Kouider at the École Normale Supérieure in Paris used the brain's electrical signals instead. He began with maps of the brain activity that scientists have previously measured in adults when they are consciously perceiving something. The approach relies on a brain phenomenon called "visual masking

as they show someone a flash of an image followed by a different image. Afterward, they ask the viewer to report what he or she saw. The threshold for how long the flashed image must last before the subject reports awareness of it can be matched up with the telltale brain waves that show this conscious spike. 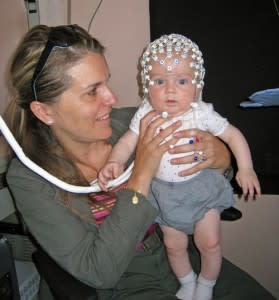 One of the 5-month-old babies in the study shown wearing the EEG cap, alongside his mother. Photo courtesy Sid Kouider. In the current study, this method was applied to 80 infants in three age groups---5 months, 12 months and 15 months. Infants were shown faces for various lengths of time while scientists measured brain activity. Younger infants took longer to perceive the images---they had to be shown for at least 150 milliseconds. Babies who were 15 months old, on the other hand, were closer to adults in their speed of image recognition---they could respond to an image shown between 50 and 100 milliseconds. And with the 15-month-old babies, their brain activity showed they anticipated the return of the faces. “They were not only able to maintain the perceptual representation of a stimulus over time but also to use this information to adapt their behavior,” the researchers write in the paper

, published today in the journal Science. The marked differences in the infants’ speed in recognizing images gives an indication of brain development. While younger infants’ brains have the long-fiber connections in place, they don’t process as quickly because they aren't yet coated in myelin. By the time babies turn one year old, those long-distance connections begin to gain myelin and speed up, and babies' brain signals thus processes faster. Researchers say the new study offers a way to measure conscious perception, and could be useful in determining whether people in unresponsive states are aware of their surroundings. The work also could eventually help physicians understand the effect of anesthesia on infants and their perception of pain. Top image courtesy nikkos / Shutterstock