Are We "Meant" to Have Language and Music?

The Brain from 25000 Feet, The Vision Revolution, and his newest book, Harnessed: How Language and Music Mimicked Nature and Transformed Ape to Man." What do ironing and hang-gliding have in common? Not much really, except that we weren’t designed to do either of them. And that goes for a million other modern-civilization things we regularly do but are not “supposed” to do. We’re fish out of water, living in radically unnatural environments and behaving ridiculously for a great ape. So, if one were interested in figuring out which things are fundamentally part of what it is to be human, then those million crazy things we do these days would not be on the list. 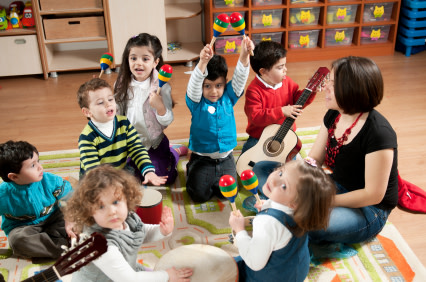 But what would be on the list? At the top of the list of things we do that we’re supposed to be doing, and that are at the core of what it is to be human rather than some other sort of animal, are language and music. Language is the pinnacle of usefulness, and was key to our domination of the Earth (and the Moon). And music is arguably the pinnacle of the arts. Language and music are fantastically complex, and we’re brilliantly capable at absorbing them, and from a young age. That’s how we know we’re meant to be doing them, i.e., how we know we evolved brains for engaging in language and music. But what if this gets language and music all wrong? What if we’re not, in fact, meant to have language and music? What if our endless yapping and music-filled hours each day are deeply unnatural behaviors for our species? (What if the parents in Footloose* were right?!) I believe that language and music are, indeed, not part of our core---that we never evolved by natural selection to engage in them. The reason we have such a head for language and music is not that we evolved for them, but, rather, that language and music evolved—culturally evolved over millennia—for us. Our brains aren’t shaped for these pinnacles of humankind. Rather, these pinnacles of humankind are shaped to be good for our brains. But how on Earth can one argue for such a view? If language and music have shaped themselves to be good for non-linguistic and amusical brains, then what would their shapes have to be? They’d have to possess the auditory structure of…nature. That is, we have auditory systems which have evolved to be brilliantly capable at processing the sounds from nature, and language and music would need to mimic those sorts of sounds in order to harness—to “nature-harness,” as I call it—our brain. And language and music do nature-harness, a case I make in my third book, Harnessed: How Language and Music Mimicked Nature and Transformed Ape to Man

(Benbella, 2011). The two most important classes of auditory stimuli for humans are (i) events among objects (most commonly solid objects), and (ii) events among humans (i.e., human behavior). And, in my research I have shown that the signature sounds in these two auditory domains drive the sounds we humans use in (i) speech and (ii) music, respectively. For example, the principal source of modulation of pitch in the natural world comes from the Doppler shift, where objects moving toward you have a high pitch and objects moving away have a low pitch; from these pitch modulations a listener can hear an object's direction of movement relative to his or her position. In the book I provide a battery of converging evidence that melody in music has culturally evolved to sound like the (often exaggerations of) Doppler shifts of a person moving in one's midst. Consider first that a mover's pitch will modulate within a fixed range, the top and bottom pitches occurring when the mover is headed, respectively, toward and away from you. Do melodies confine themselves to fixed ranges? They tend to, and tessitura is the musical term to refer to this range. In the book I run through a variety of specific predictions. Here's one. If melody is "trying" to sound like the Doppler shifts of a mover—and thereby convey to the auditory system the trajectory of a fictional mover—then a faster mover will have a greater difference between its top and bottom pitch. Does faster music tend to have a wider tessitura? That is, does music with a faster tempo—more beats, or footsteps, per second—tend to have a wider tessitura? Notice that the performer of faster tempo music would ideally like the tessitura to narrow, not widen! But what we found is that, indeed, music having a greater tempo tends to have a wider tessitura, just what one would expect if the meaning of melody is the direction of a mover in your midst. For the full set of arguments for language and music you'll have to read the book, and the preliminary conclusion of the research is that, human speech sounds like solid objects events, and music sounds like human behavior! That’s just what we expect if we were never meant to do language and music. Language and music have the fingerprints of being unnatural (i.e., of not having their origins via natural selection)…and the giveaway is, ironically, that their shapes are natural (i.e., have the structure of natural auditory events). We also find this for another core capability that we know we’re not “meant” to do: reading. Writing was invented much too recently for us to have specialized reading mechanisms in the brain (although there are new hints of early writing

as old as 30,000 years), and yet reading has the hallmarks of instinct

. As I have argued in my research and in my second book, The Vision Revolution

, writing slides so well into our brain because it got shaped by cultural evolution to look “like nature,” and, specifically, to have the signature contour-combinations found in natural scenes (which consists mostly of opaque objects strewn about). My research suggests that language and music aren’t any more part of our biological identity than reading is. Counterintuitively, then, we aren’t “supposed” to be speaking and listening to music. They aren’t part of our “core” after all. Or, at least, they aren’t part of the core of Homo sapiens as the species originally appeared. But, it seems reasonable to insist that, whether or not language and music are part of our natural biological history, they are indeed at the core of what we take to be centrally human now. Being human today is quite a different thing than being the original Homo sapiens. So, what is it to be human? Unlike Homo sapiens, we’re grown in a radically different petri dish

. Our habitat is filled with cultural artifacts—the two heavyweights being language and music—designed to harness our brains’ ancient capabilities and transform them into new ones. Humans are more than Homo sapiens. Humans are Homo sapiens who have been nature-harnessed into an altogether novel creature, one designed in part via natural selection, but also in part via cultural evolution. * Correction: This bit originally mentionedDirty Dancing instead of Footloose. Thanks to @LaurenAMichael for the 80's pop-culture refresher.An earlier, shorter, version of this piece appeared originally on the Nook.