Are Virtual Happy Hours as Good as the Real Thing?

As we practice social distancing during the coronavirus pandemic, are virtual connections as beneficial for our health as real ones? 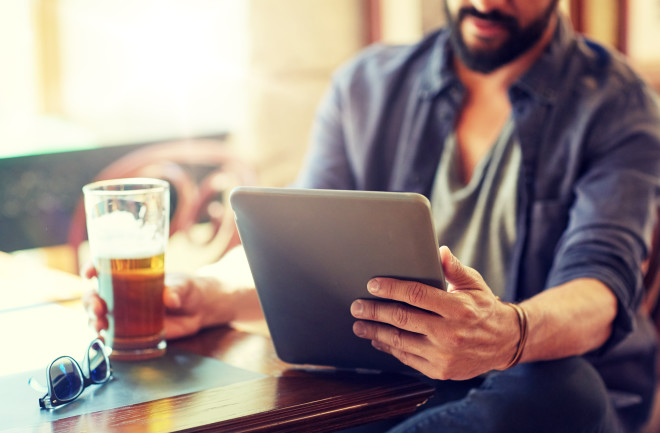 Except for occasionally yapping from across the sidewalk at a neighbor or smiling at a fellow jogger on my daily route, my social life has become largely virtual. I’m used to it in the workspace because I’ve worked from home for most of my writing career. But socially, my happy hours now appear like the “Brady Bunch” intro: a gallery view of friends sipping on wine through the meeting platform Zoom.

Last week, my husband and I showered and even straightened up our living room to prepare for a virtual double date. It was fun. We got to catch up with a couple we never see because, with five kids between us, it’s hard to secure babysitters. That’s one perk of not leaving the house.

The quick jump to visiting friends virtually isn’t entirely surprising. Humans aren’t good at being by themselves. We thrive on social interactions, and we’re quick to find a substitute in a pinch. And while virtual happy hours are fun and something to look forward to at the end of the day, are they as good as the real thing?

“For people that are willing to initiate video conferencing, it will make a huge difference,” says Jacqueline Olds, an associate professor of psychiatry at Harvard Medical School and author of the book The Lonely American: Drifting Apart in the Twenty-First Century. “Face-to-face contact is better because it stimulates all of our senses; but since we can’t, video conferencing is about 50 to 60 percent as good.”

Olds says it’s better than the phone because you can see a person’s facial expressions and natural habitat. It will be a “lifesaver” for the most vulnerable among us because some are better at handling this isolation than others.

“For those of us with activities and hobbies that we love to do, we’re better at keeping ourselves company,” says Olds. “But others tend to get carried away in their own catastrophic thinking when they’re by themselves.”

It’s these types of people who need interaction the most, but we can all benefit from it. And it’s not just virtual happy hours that can be effective at staving off loneliness; we can also remain socially connected by watching podcasts, taking livestreamed yoga classes and finding other enrichment activities to fill our day and schedule our time, says Olds. She recommends tapping friends and family for new activities to try. This way, it feels like we’re connected with our ideas as well.

While Olds says virtual connection is beneficial from a mental health perspective, when you look at the brain, it’s less clear how we interpret such interactions.

Mayank Mehta, a UCLA professor of physics, neurology and neurobiology, has been studying how to make virtual learning at universities more effective. His research on rats has shown that in virtual reality, images of the brain look different when compared with face-to-face interactions.

Much of his research is done on the hippocampus, the part of the brain that, among many other things, is home to our social interactions. As part of the experiment, rats are attached to a mounted foam wheel. A virtual reality show of lights and shapes appears around them. While it might seem stimulating because the rat and light show are constantly moving, imaging of the rat’s hippocampus shows that as much as 60 percent of neurons have shut down and stopped firing, according to Mehta.

We know that when neurons fire together, they wire together. This is how the brain creates pathways of memories and learning, but in virtual reality there seems to be a disconnection. Mehta and his team aren’t completely sure why the rat’s hippocampus seems to partially shut down, but he thinks it’s because the senses in the body become confused.

“Virtual reality puts the brain in a state of conflict,” says Mehta.

While it hasn’t yet been studied in humans, he thinks the same conflict could arise during a virtual happy hour, for example. While some of the senses like sight and sound become stimulated by the experience, smell and touch aren’t aroused because you’re still at your own home. Therefore, the social part of the brain can’t be completely stimulated by the experience. Mehta and his team are working toward translating this research into improving the technology so that it appears more realistic and believable to the brain.

In the meantime, like Olds, he agrees that being able to see someone through video conferencing platforms is better than just being able to hear them. The bottom line: Virtual happy hours, book clubs and double dates are still a valuable way to stay connected — at least during this pandemic.