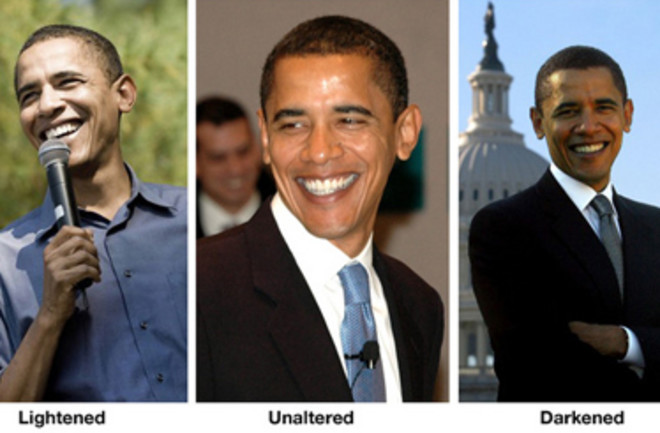 Researchers are making the case that a person's political views cause them to see with a tinted perspective. Scientists showed undergraduate students a series of digitally darkened or lightened photos of President Barack Obama last fall, and asked them which photos best represented him as a person.

The results were striking: while self-described liberals tended to pick the digitally lightened photos of the president, self-described conservative students more frequently picked the darkened images. The more one agrees with a politician, in other words, the lighter his skin tone seems; the less you agree, the darker it becomes [Newsweek].

The study will be published in theProceedings of the National Academy of Sciences. According to lead researcher Eugene Caruso,

they found that the degree to which someone saw a lightened photo as being representative of Obama was related to whether he voted for him a week later. That was true even after the researchers controlled for political views and measures of bias against blacks [NPR].

Caruso says their results indicate that the degree to which you see eye to eye with someone politically can alter your physical perception of them. By controlling for bias against blacks, the study seems to indicate that race isn't the issue, but simply how light or dark a person is,

though it isn't totally clear on that point. It also seems to buy in to the claim that Hillary Clinton artificially darkened an image of Obama, which wasn't terribly widely believed. Anyway, the research's most practical finding seems to be that devious political hacks don't need to play games with candidates' pictures because the voters are doing it themselves [Politico].

To see if their finding applied to politically ambiguous and unknown candidates, Caruso ran a similar experiment using altered photos of a fake candidate running for a board of education position. They also found that people shown darkened photos were less likely to say the would vote for the candidate, even if they agreed with them on roughly half of the issues. The researchers would like to see how the results of their Obama photo experiment would compare to a similar experiment with a conservative biracial candidate. Related Content: DISCOVER: Future Tech: facial recognition systems in airports 80beats: “Undecided” Voters Have Already Decided… They Just Don’t Know It 80beats: Where You Vote Could Influence How You VoteImage: PNAS