Are Humans Hardwired for Heroism?

This excerpt from the book What Makes a Hero? explains that, though generosity may often be self-interested, true selflessness and compassion can also be taught. 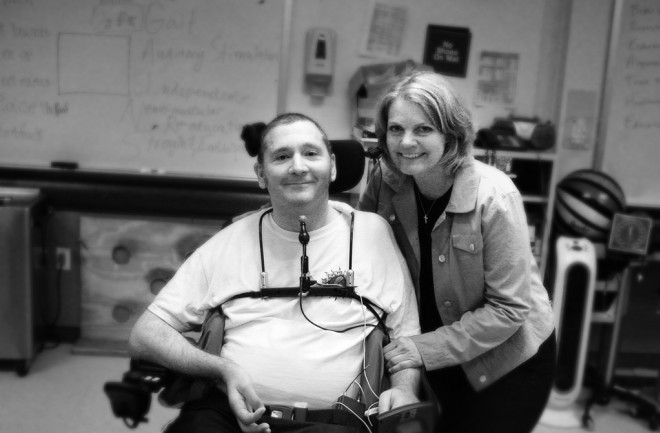 Dave Hartsock and Shirley Dygert meet for the first time after the skydiving accident that left Hartsock paralyzed. | Barcroft Media/Landov

It was a sunny summer day in 2010 just outside Houston, and 54-year-old Shirley Dygert was getting ready to skydive for the first time. Though nervous, she felt at ease after meeting her instructor, Dave Hartsock — the man she’d be strapped to as they executed a tandem dive from a plane. When she asked him how often he’d done this, he reassured her, “Hundreds of jumps.”

But problems started as soon as Hartsock opened the parachute to stop their free fall. The chute didn’t open all the way, and the backup parachute got tangled up. As the two neared the ground, Hartsock made a fateful decision, using control toggles to rotate himself so his body would cushion Dygert’s fall.

Hartsock’s action dramatically altered the course of both their lives. While Dygert incurred some injuries, Hartsock’s spinal cord suffered a severe blow, paralyzing him from the neck down. A man who’d just met Dygert sacrificed his own well-being so she might keep hers. “I was absolutely amazed,” Dygert says, blinking back tears. “How can somebody have that much love for another person?”

The question that still preoccupies Dygert is the same one that echoed in so many people’s minds after the story of Hartsock’s feat went public: Why?

Why did Dave Hartsock — going against every self-preserving impulse that must have screamed through him — propel his body in a direction he knew would put him in harm’s way? Can anybody learn to build on natural biological endowments to become such a model of selflessness? That question has recently spurred a wave of research exploring how biology and experience intersect to produce selfless behavior, which runs along a broad continuum from everyday generosity to acts of extraordinary self-sacrifice.

A few years ago, economist Bill Harbaugh of the University of Oregon wanted to know what rational calculations play into people’s charitable giving choices. He and psychologist colleague Ulrich Mayr presented subjects with opportunities to donate to a food bank from a fund of $100. An fMRI scanner recorded what areas of their brains were activated as they chose.

When subjects decided to donate their money, Harbaugh and Mayr found, brain areas involved in processing rewards lit up more than they did when the decision to donate was not their own, but was instead dictated by the experimenters.

One such area was the nucleus accumbens, which contains neurons that release the pleasure chemical dopamine. This area “keeps track of rewards, whatever kind they are,” Harbaugh says. Some subjects, whom he calls “egoists,” showed less such activity at the prospect of seeing their money go to charity. Those he calls “altruists” showed more. The results, he says, suggest that at least for some people, giving money to others provides an intrinsic reward that is neurologically similar to ingesting an addictive drug.

Compassion is a Muscle

Harbaugh and Mayr’s results raise the question of whether it might be possible to stoke the brain’s reward system. Can reinforcing generosity make people — especially those who lean toward the egoist side of the spectrum — start to crave the pleasure of giving?

Harbaugh is optimistic. “You can change your taste for all kinds of things,” he says. For example, if charities ask donors for relatively small amounts of money at first, the neural reward from giving may outweigh the pain of giving up money. Having had a pleasurable experience on balance, donors might be more apt to give again.

People may also be able to train their minds to be more selfless through meditation focused on compassionate thinking. In one study, University of Wisconsin-Madison psychologist Richard Davidson put long-term meditators and people with no meditation experience into fMRI scanners and piped in either emotionally charged sounds, such as the cry of a woman in distress, or neutral sounds, such as background chatter in a restaurant. When listening to emotionally charged sounds, the long-term meditators showed greater activity in brain areas involved in experiencing emotion and empathy.

Davidson believes his results support the theory that consistent compassion meditation makes it easier to understand what other people are going through, and may motivate us to intervene when someone else is in distress.

Another recent experiment in his lab suggests compassion is like a muscle that can be conditioned. In the study, Davidson, graduate student Helen Weng and colleagues recruited 41 participants, none of whom were experienced meditators. The researchers trained a group of participants in compassion meditation, a form of Buddhist meditation, for 30 minutes daily for two weeks.

The practice involved focusing one’s thoughts on a particular person and repeating phrases such as, “May you be free from suffering. May you have joy and ease.” Participants in a control group practiced a different technique known as cognitive reappraisal, in which they learned to generate fewer negative thoughts.

After the training, participants in both groups played an online game in which another person was treated unfairly. Weng’s team found that people who practiced compassion meditation were more willing to shell out money to help the unfortunate victim, compared with those in the control group. What’s more, in a neuroimaging study in which the participants were shown images depicting human suffering, those who gave most generously during the online game also showed greatest activation in brain areas involved in empathy, emotion regulation and positive emotion.

Other research bolsters these findings. Stanford psychologist Jeanne Tsai and colleagues found, for example, that after taking a brief compassion meditation course, people were less fearful of showing compassion to themselves and others and of accepting compassion. And researchers at Emory University found that such training enhanced people’s ability to correctly interpret other people’s facial expressions.

Some researchers speculate that the brain is so readily trained for compassion and generosity because those traits carry adaptive value. Some research hints that selflessness yields both mental and physical rewards.

When Allan Luks, director of Fordham University’s Center for Nonprofit Leaders, surveyed thousands of volunteers across the country, 95 percent of respondents reported a pleasurable physical sensation associated with helping — what Luks refers to as the “helper’s high.” In a study of 423 older couples, University of Michigan researchers found that those who reported providing no help to others were more than twice as likely to die during the five-year study period than those who reported helping others.

But it might be counterproductive to help others exclusively with such benefits in mind. In one study, researchers found that the people who experienced the most significant longevity gain from helping were those whose goal was to help for its own sake. People who volunteered in hopes of escaping their own troubles or feeling better about themselves were no better off than those who didn’t volunteer at all. Perhaps, then, it’s most constructive not to think of the “helper’s high” as an end in itself, but as a fringe benefit.

The personal effects of more extreme heroism are likely more complicated. For example, taking extraordinary risks can mean bucking social norms, which can cause distress — as, of course, can consequences such as injury. On the other hand, the knowledge that you’ve demonstrated moral courage when it counted carries enormous power.

Just ask Dave Hartsock, who suffered terrible injuries to save Shirley Dygert. He insists he wouldn’t have done things any other way.