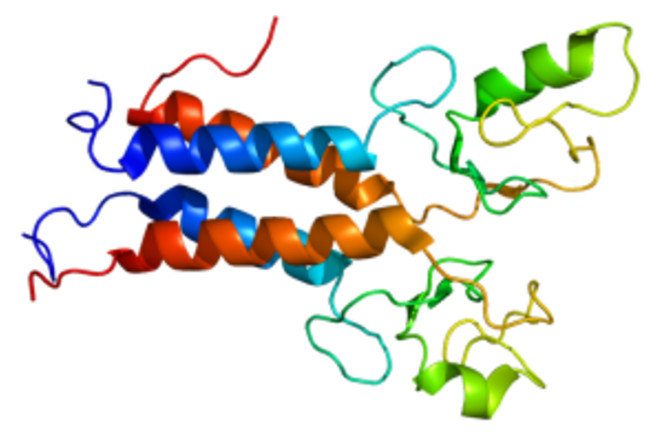 The protein produced by the BRCA1 gene. Wikimedia Commons. It’s rare for a decision involving a genetic predisposition to seem so clearcut -- an 87 percent chance of getting breast cancer before you die. Those were the odds Angelina Jolie was given after she was found to have inherited a defective gene called BRCA1. There was also the matter of BRCA-related ovarian cancer, with her lifetime odds put at 50 percent. With no other effective remedies in sight, she decided on a double mastectomy with plans to follow that with an oophorectomy, the removal of her ovaries. For all the talk about sequencing the cancer genome and precisely designed therapies, all that science could offer in the way of prevention was the amputation of healthy body parts. I was traveling last week when she explained her decision in a widely discussed op-ed piece in the New York Times. I didn’t write much about BRCA in The Cancer Chronicles, so I spent some time this weekend getting a stronger sense of what is known about the disease. Inherited BRCA defects are very rare, contributing to just a few percent of breast cancer cases, and Jolie’s situation was extreme. The average lifetime risk of women who have inherited the mutation is 65 percent, or about five times the normal odds. It was the actress’s family history that put her at the top end of the scale. A posting on the website of the cancer center where she was treated provided more details. Her mother had both kinds of cancer and died from the ovarian, which had also struck Jolie’s grandmother. Even with such strong predispositions, cancer is not inevitable. When you dig into the details the ambiguities arise. BRCA is short for breast cancer. It is a gene, like Rb (for retinoblastoma), perversely named for a condition it is meant to prevent. The healthy genes (there are BRCA1 and BRCA2) produce proteins that help repair the damage to the genome that occurs during normal cellular operations. If a woman inherits certain BRCA mutations, the repair function may be jeopardized. Fortunately people are born with two copies of every gene, one from each parent. It is when the matching gene -- the backup -- also becomes corrupted that trouble can begin. That might happen because of exposure to a carcinogen, a hormonal imbalance, or a spontaneous mutation -- one with no real cause. More damage then accumulates, and the right combination of mutations may turn the cell into a malignant one. Because of all the complications, the actual risk for an individual with a BRCA1 mutation varies widely around the average. The canonical number -- a 65 percent lifetime risk for women -- comes from studies of families that carried the mutation and had multiple cases of breast cancer, often occurring at an early age. Because they are closely related, the women may also have shared other inherited mutations -- ones whose role science has yet to pinpoint -- as well as environmental exposures. They may have eaten the same kinds of food. Any of these factors may have contributed to the cancer. The result might be that the risk for the BRCA mutation alone has been overstated. BRCA carriers without a family history may face less than a 40 percent chance of getting the disease. Conversely, a University of Toronto study found that women whose families had a propensity for the cancer were four times more likely to get it themselves, even if they did not have BRCA mutations. Given her own odds and the murky state of the science, Jolie’s decision made sense. BRCA-related breast cancers are often triple-negative, the hardest kind to treat. And for all breast cancers that can’t be stopped from metastasizing, even the most advanced therapies fall far short of a cure. The same is true for ovarian cancer. There is no way to know if in the next few years less radical alternatives will be found -- treatments that arrest the disease rather than merely staving off death a few months longer. Maybe other factors will be identified allowing the risk to be more precisely measured. Someday people may look back on preventive mastectomies as barbaric. But given the glacial pace of progress, Jolie and her doctors had every reason to be pessimistic and to chose the course they did. Coming soon: Why is there no Gleevec for breast cancer?