An Upside to Amyloids

These proteins, once thought to be universally toxic, may actually have a therapeutic benefit. 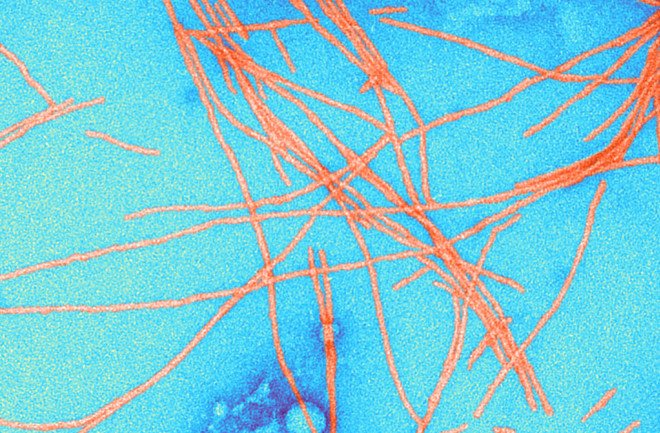 Amyloid proteins, seen here as fibrils (slender fibers), have long been suspected as a culprit in symptoms of neurodegenerative diseases such as Alzheimer’s. New research may reverse that notion. | Science Source

Amyloids have long been considered the rogues of neuroscience. In the brain, these sticky barnacle-like proteins are believed to be the culprits behind the memory-robbing ravages of Alzheimer’s disease. But some startling discoveries are fueling a counterintuitive view of amyloid proteins. Perhaps they aren’t the villains scientists once thought they were.

In a surprising new study out of Stanford published in 2013, researchers reported that amyloids actually relieved paralysis in mice suffering from a rodent version of multiple sclerosis (MS), in which immune cells go haywire, attacking the fatty myelin sheathing that insulates nerves and causing cognitive defects and loss of motor control.

The research was inspired by a chance observation a few years ago. In examining autopsy samples from MS patients, the researchers detected an abundance of amyloids in brain lesions and damaged neurons, the hallmarks of the disease. They assumed that the presence of so many amyloids indicated a destructive role here, too. But in a 2012 study, they found that when they injected synthetic amyloids into lab mice bred to have an MS-like brain inflammation, the mice got better and were able to walk again. Yet if they stopped giving the animals the injections, the motor symptoms returned.

“The body produces a lot of amyloids after an injury, so in some circumstances, they may be performing a guardian function,” says study co-author and Stanford neurologist Lawrence Steinman. “In this case, the amyloids seem to be molecular chaperones that mop up the cells causing the inflammation.”

But this remarkable therapeutic benefit isn’t limited to MS. Previous research in animal models that mimic other diseases suggest that certain forms of amyloids can ease damage from strokes, traumatic brain injuries and even heart attacks. “We have amyloid-forming proteins in every cell of our body, so they must have a crucial function,” Steinman says.

Given these insights, amyloids’ role in Alzheimer’s may be much more complex than researchers thought years ago, when they first discovered the clumps, or plaque, in the brains of Alzheimer’s patients during autopsy. In fact, in another study published last year, National Institute on Aging (NIA) researchers discovered that people with what’s called a CR1 gene variant — the presence of which heightens Alzheimer’s disease risk — had much lower levels of amyloid protein compared with those without the mutant gene. Here again, researchers expected these errant bits of DNA would increase the accumulation of amyloid, not diminish them.

“These findings were completely unexpected to say the least, and we sat on them for almost a year to replicate our findings with additional data because they question the conventional wisdom in the field that the increased accumulation of amyloid is the hallmark of Alzheimer’s,” says neurologist Madhav Thambisetty of the NIA. “These results raise the distinct possibility that there are other pathways — such as inflammation in the brain — that are just as important in the development of Alzheimer’s disease.”

So are amyloids innocent bystanders or even Good Samaritans dispatched to douse the flames? Only more research will tell. “But the news here is that this reverses the notion that amyloids are universally toxic,” says neurologist and psychiatrist Sam Gandy, an Alzheimer’s researcher at the Mount Sinai School of Medicine in New York. Steinman, for one, thinks this new insight might revolutionize our ideas about what causes the devastating disease.

[This article originally appeared in print as "An Upside to Amyloids."]