All That Glitters Is Not BOLD For fMRI Scanning?

A new paper warns that: All that glitters is not BOLD. This title seems designed to worry neuroscientists, because the blood oxygenation-level dependent (BOLD) phenomenon is what allows fMRI scanning to detect brain activity. Or is it? Writing in Scientific Reports, Finnish neuroscientists Ville Renval, Cathy Nangini and Riitta Hari argue that BOLD isn't always central to the fMRI signal. To arrive at this claim, they examined what happens to the results of fMRI brain scans when you fiddle with certain parameters; the key experiment compared different options of the flip angle (FA). The FA is one of the fundamental settings that must be specified for any MRI scan. However, I think it's fair to say that most neuroscientists have not given the FA much thought, tending to stick with the default setting known as the Ernst angle. To see if the FA matters, Renval et al showed some volunteers viewed a grey circle which, at certain points, started flashing black and white in a square pattern, like a checkerboard. It's known that the flashy checkerboard strongly activates the brain's visual cortex more than a static grey. During the study, the flip angle was varied over the course of the scans - the options were 12.6, 22.5, 50 and 90 degrees and some of these changes happened within each scan, which is an unorthodox (but informative) approach. Another parameter, the echo time (TE) was also varied: 16 or 30 milliseconds. Because the volunteers were always seeing the same two stimuli (static grey vs flashing checkerboard), we can assume that the brain was activating in the same way throughout the scan (i.e. with more activity in visual cortex to checkerboard.) The different FA set-ups would, therefore, ideally have detected the same results. However...

Changing the FA had no effect on measured activity in the visual cortex, the first four regions pictured above. The green circles show perfect overlap between the activation maps. But it was a different picture elsewhere in the brain. In particular, the measured activation was highly FA-dependent in the zeitgeisty 'default mode network' areas, the posterior cingulate cortex (PCC) and the precuneus. This suggests that the underlying basis of the fMRI signal is not the same everywhere in the brain. There's more. The key finding of the paper comes in Figure 4, a behemoth of an image which I'll display in full: 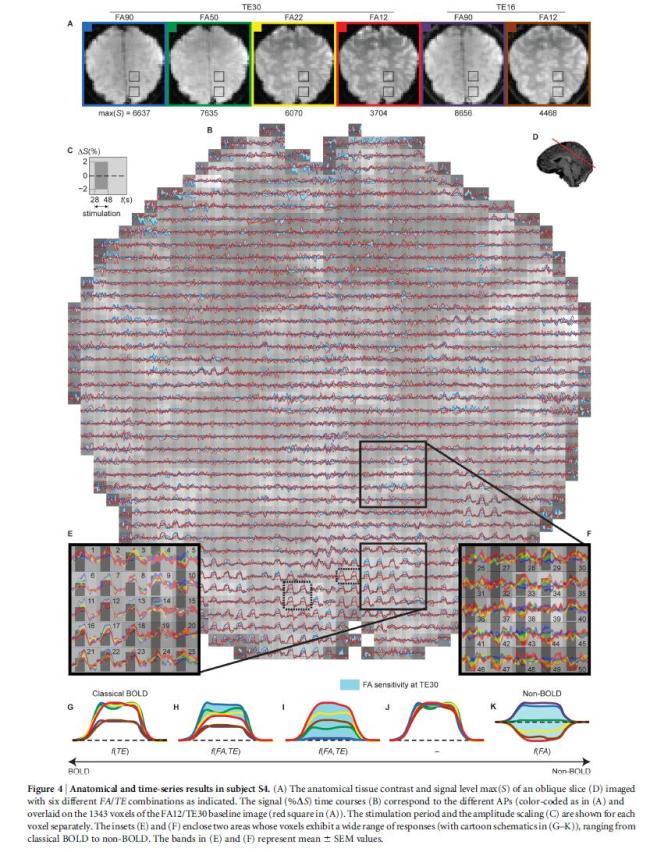 Look closely and you'll see that the grey slice-of-brain picture is composed of hundreds of little graphs. Each has six lines, depicting the average checkerboard-evoked signal over six different conditions of FA and TE. Renvall et al say that these data confirm "non-BOLD" behavior in many areas of the brain. The signal in many areas does not behave as BOLD signal ought to (that is, it should vary with TE, and not vary with FA.) Why not? The stock villain of neuroimaging, head movement, did not seem to be responsible. However areas of the brain containing fluid (CSF) were found to be high in non-BOLD signal. It's still not clear, in other words, what the 'non-BOLD' contribution to the activation represents... which is rather unsettling. So is this a bombshell for fMRI? Surprisingly (given the title of their paper), Renvall et al end on a reassuring note, saying that the messiness they've uncovered probably cancels out in the grand scheme of things:

Our results are likely less central for traditional group-level analyses of activation locale (brain mapping) because the discrepancies tend to average out due to anatomical variability, and even localized non-BOLD changes still represent functional signal.

Still, these interesting results suggest that depending upon the specific brain areas of interest, tweaking the acquisition parameters could bring benefits for fMRI. Certainly after reading this paper neuroscientists will be less likely to be so flippant about flip angles. You can almost see the disapproving frown on the faces of Renvall et al when they wrote:

The commonplaceness of fMRI has given the impression that this imaging method can be used in an ‘‘automatic’’ mode, without worrying about the biophysical basis of fMRI signal changes. Some recent studies do not report even the basic acquisition parameters, such as TE, TR, or flip angle (FA), as if these were well-established defaults with no appreciable influence on the data.