Age Is Just a Number (of Neural Stem Cells) 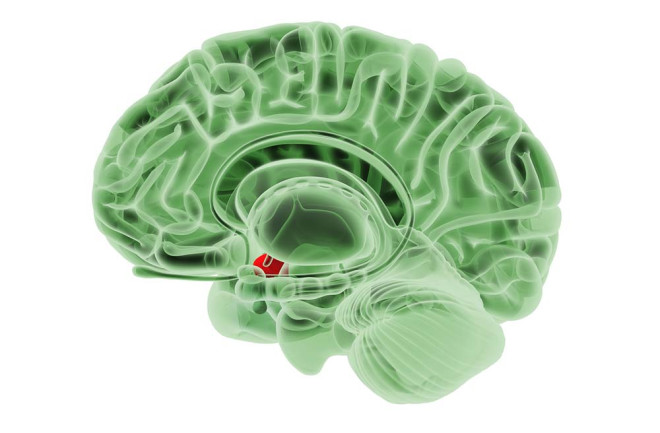 The hypothalamus, shown in red, is a region in the brain that regulates hunger, sleep, body temperature and other activities. Research shows its stem cells also impact the aging process. | Claus Lunau/Science Source

Scientists may have identified how to slow or even reverse our biological clock. Adult neural stem cells in the hypothalamus — a brain region that regulates hunger, sleep, body temperature and other activities — appear to orchestrate the body’s aging process, they found.

Research on lab animals has shown that the number of hypothalamus stem cells diminishes with age. To determine if this cell loss was related to aging, scientists killed off hypothalamic stem cells in middle-aged mice, according to a study that appeared in July in Nature. The mice showed clear signs of aging, such as loss of memory, endurance and coordination.

The scientists also discovered that the stem cells released tiny packets of microRNA, bits of genetic material that control how genes function. They injected the mRNA into the middle-aged mice that were missing hypothalamic stem cells and into healthy mice of similar age. In both groups, the treatment slowed aging.

The findings could lead to better methods of treating age-related maladies and prolonging life, says lead author Dongsheng Cai of the Albert Einstein College of Medicine. “But it will take some time to translate this into humans,” he says.

More From Discover
Mind
Weed Might Not Make You Creative After All
Mind
How Does Alzheimer's Disease Lead to Death?
Mind
Calming Kids With Electronics May Affect Emotion Regulation Skills
Mind
Gut Bacteria's Role in Anxiety and Depression: It’s Not Just In Your Head
Mind
How Failing Could Actually Help us Succeed
Mind
Can Playing Video Games Make You Smarter?
Recommendations From Our Store
My Science ShopDiscover STEM Kits
My Science ShopDiscover 2022 Calendar
My Science ShopStrange Science
My Science ShopElements Flashcards
Shop Now
Stay Curious
Join
Our List