A Machine to Weigh the Soul

Newly discovered papers have shed light on a fascinating episode in the history of neuroscience: Weighing brain activity with the balance The story of the early Italian neuroscientist Dr Angelo Mosso and his 'human circulation balance' is an old one - I remember reading about it as a student, in the introductory bit of a textbook on fMRI - but until now, the exact details were murky. In the new paper, Italian neuroscientists Sandrone and colleagues report that they've unearthed Mosso's original manuscripts from an archive in Milan. 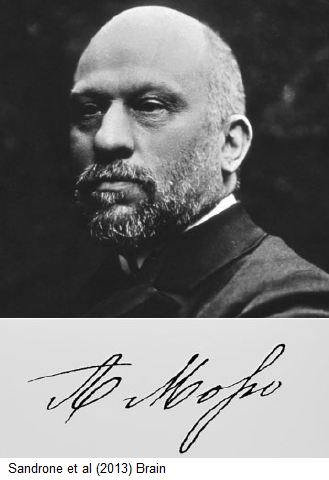 Mosso worked in the late 19th century, an era that was - in retrospect - right at the dawn of modern neuroscience. A major question at that time was the relationship between brain function and blood flow. His early work included studies of the blood pressure in the brains of individuals with skull defects. His most ambitious project, however, was his balance - or as he sometimes called it, according to his daughter, his ‘metal cradle’ or ‘machine to weigh the soul’. Here's his own 1884 drawing of the contraption: 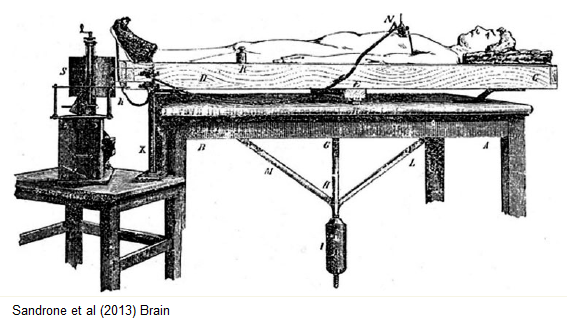 It was in essence just a large balance. A volunteer lay on a table, their head on one side of the scale's pivot and their feet on the other. It was carefully adjusted so that the two sides were perfectly balanced. The theory was that if mental activity caused increased brain blood flow, it ought to increase the weight of the head relative to the rest of the body, so that side of the balance would fall. Mosso claimed that this, indeed, occurred - starting to read a newspaper caused the brain to get weightier, while a difficult book of philosophy was even more effective, presumably because it required more mental effort to understand. Matters were rather complex, however, because Mosso had realized that in order to obtain valid results, it was necessary to correct for things such as head movement, breathing, and pulse. These physiological artifacts still cause endless problems forneuroscientists tothis day. To measure and eliminate these sources of noise, Mosso build his balance to include a series of sphygmographs - pressure monitors (complex machines in their own right) - to record blood-flow in the hand, the foot, and also chest movements during breathing. The whole thing was connected to a pen that made a trace on a sheet of paper stuck to a rotating, clockwork drum - thus plotting the data as a graph. But did it really work? It's plausible, but Sandrone et al are noncommittal:

Overall, despite Mosso’s keen awareness of the number of artifacts that might arise from this procedure, together with his extensive efforts to quantify possible confounding variables, it is not clear whether the ‘Mosso method’ could realistically and sensibly discriminate between the signal (real brain blood flow changes) and the noise.

While it's certainly true that local brain activity does alter local blood flow (this is the basis of fMRI and other modern neuroimaging methods), it's hard to say whether this would affect the overall weight of the head. Even if it did, the effect might be too small to detect with any technology available in Mosso's time. Either way, it was an amazing endeavor. The public at the time were sold on the idea - so much so, that they sound almost 21st century in their hopes...

On 1 December 1908, a French newspaper reported that numerous people ‘were passionate about the experiments of Professor Angelo Mosso’ and enthusiastically believed that this device ‘would soon fully explain the physiology of the human brain’ and lead to new treatments for neurological and mental illnesses.