A genealogy of alphabets 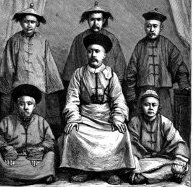 The Xibo are one of populations in the Human Genome Diversity Project data set, so you've probably seen them here and there. They're a Tungusic group affiliated with the Manchus, which explains why their script is a modified form of the nearly extinct Manchu script. The Manchurian alphabet is itself a modification of the Mongolian alphabet. Though marginalized by Cyrillic, the old alphabet is making a comeback since the fall of Communism. In its turn the Mongolian script derives from the old Uyghur alphabet. This has been extinct since the 18th century, having been replaced by and large by an Arabic derived script (there have been experiments with Cyrillic and Chinese, and now Latin, for Uyghur). Old Uyghur was a descendant of the Sogdian alphabet. This was the alphabet of an ancient East Iranian people who are now extinct culturally (Yaghnobi is a linguistic descendant). Finally, Sogdian itself derives from Syriac, which was the child of Aramaic, the "original alphabet," though it itself may derive from Proto-Sinaitic. The point of this post was to show how cultural connections can stretch long and far, often in strange unexpected directions.