A Close Look at the Connectivity of a Single Brain

In a new paper just out inNeuron, researchers Timothy Laumann and colleagues present an in-depth look at a single human brain. The brain in question belongs to neuroscientist Russ Poldrack, and he's one of the authors of the paper. Poldrack was fMRI scanned a total of 84 times over a period of 532 days. The goal of this intense scanning schedule was to provide a detailed analysis of the functional connectivity of an individual brain. Previous studies have compared functional connectivity in hundreds of different brains, so we already know what the average pattern of connectivity looks like. But, as the authors put it, "just as no single brain is representative of a population, no group-averaged brain represents a given individual." On the other hand, to understand an individual brain, one scan is not enough, because "an observed pattern of functional brain organization in an individual may reflect persistent traits shaped by development and genetics, but may also relate to current state or environmental effects." Hence this study. So what did they find? One important result was that the degree of session-to-session (within subject) variability in connectivity was higher in some brain regions than in others:

Within-subject variability was non-uniformly distributed across systems, with higher variability observed in correlations within and between somatomotor and visual regions. Relatively less variability was observed between frontoparietal, default mode, ventral attention, and medial parietal regions.

What's interesting is that variability between different people (across subjects) shows a very different pattern, as this image shows. On the left is a heat-map of within-subject variability in Poldrack's brain, and on the right is a map of between subject variability across 120 individuals. It's notable that while visual cortex connectivity is one of the most variable networks in Poldrack's brain, it's one of the most stable across individuals. 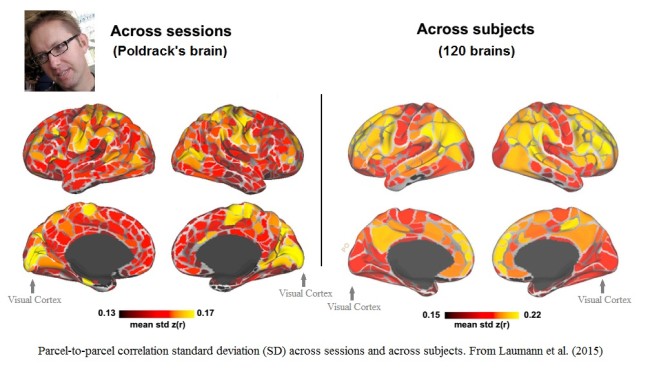 We don't know whether this pattern of variability is, itself, invariant across subjects, or whether Poldrack's visual cortex is just unusually variable. Laumann et al. performed several other analyses, on Poldrack's data and also on data from Nico Dosenbach (another of the authors, who was scanned ten times). However, they refrain from reading too much into the results, concluding that

Any study reporting observations in one or two subjects has necessarily limited generality... Therefore, we do not assign specific meaning to the detailed features observed here. However, we believe that the reliable presence of these detailed features in each individual must motivate further studies of this type... In particular, we believe that the subject-specific approach outlined here may be essential for understanding the functional brain organization of unique or rare subjects (e.g., cognitive savants, rare disease populations, or brain-injured subjects like H.M.).

Then again, convincing these patients to undergo dozens of MRI scans might be tricky, though, and so would finding money to pay for them. Link: The raw data from this study is available here.