A Brain Basis for Musical Hallucinations?

Why do some people hear music that's not there? Musical hallucinations are most commonly found in people who have suffered hearing loss or deafness. But why they happen is unknown. In a new paper in Cortex, British neuroscientists Kumar et al claim to have found A brain basis for musical hallucinations Using magnetoencephalography (MEG), the authors investigate brain activity in a patient, a 66 year old woman who had been hearing phantom 'piano melodies' for almost two years, after she had suddenly become partly deaf. She was an amateur keyboard player, and was able to write down the tunes she 'heard': 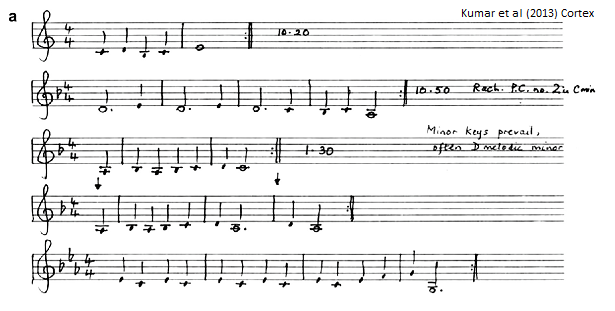 The same melody - sometimes a real tune, sometimes 'made up' - would repeat for hours at a time, and it could get annoying. However, she had discovered that listening to certain pieces of real music provided temporary relief; the hallucinations would stop during the piece, and only restart after a certain lag-period of several seconds. Kumar et al made use of this fact to compare brain activity when hallucinations were 'on' and 'off' - they recorded MEG data before and after playing 15 seconds of Bach, one of the hallucination-blocking composers. Immediately after each Bach burst, hallucinations were low, while 60 seconds later they had returned.

Clever... however there's a serious problem in this procedure: it can't separate the effects of hallucinations from the effects of stopping listening to real music, nor from the expectation of future real music (the timing of which was predictable). The obvious solution would have been to also include bursts of some music that didn't block hallucinations, as a control condition. The patient herself reported that some music didn't. This would dramatically increase the inferences one could draw from the data. Some MEG data from healthy control participants hearing the same music would also help to establish specificity. This limitation isn't acknowledged. Anyway, Kumar et al report increased gamma band activity in the left aSTG area, part of the auditory cortex. They say that

The area that shows higher activity during musical hallucination coincides with an area implicated in the normal perception of melody using fMRI.

However, strangely, the actual Bach music did not produce significant changes in activity in this area, or anywhere else in the brain. Only imaginary music caused real brain waves; Kumar et al say that this has been seen in other studies and

Some other changes in the beta frequency band were found in the motor cortex and posteromedial cortex/precuneus. Neither of these is thought of as a 'music area'. To be honest, I don't think these results shed much light on the phenomenon. The second half of the paper is rather different, providing a theoretical overview of musical hallucination. This section could almost be a paper in itself. The authors argue that

Our hypothesis is that peripheral hearing loss reduces the signal-to-noise ratio of incoming auditory stimuli and the brain responds by decreasing sensory precision or post-synaptic gain... A recurrent loop of communication is thus established which is no longer informed, or entrained, by precise bottom-up sensory prediction errors... it is constrained only by a need to preserve the internal consistency between hierarchical representations of music. This reciprocal communication between an area in music perception and area/s involved in higher music cognition (motor cortex and precuneus) with no constraint from the sensory input gives rise to musical hallucinations.