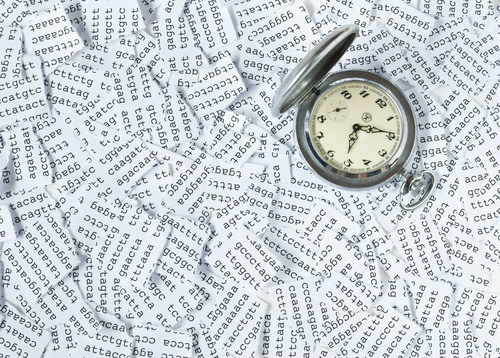 Move over, anti-aging cream. Researchers have found a new biological clock in human DNA that determines the rate at which bodily tissues age---revealing some surprising things about which parts of our bodies feel the brunt of aging soonest, and how such aging may eventually be reversed. Geneticist Steve Hovarth explained in the Daily Mail

"To fight ageing, we first need an objective way of measuring it... My goal in inventing this clock is to help scientists improve their understanding of what speeds up and slows down the human ageing process."

Hovarth's team looked at 8,000 tissue samples that had been gathered for previous studies on DNA methylation

---the process by which methyl groups are added to or taken away from DNA to change its expression. This process, a type of epigenetic modification, occurs early on in human development as cells differentiate into particular kinds of tissue. And methylation continues throughout our lives, for better (suppressing viral genes) and for worse (developing cancer).

The test samples came from various parts of the human body---heart, lungs, brain, liver, cartilage and kidney---and ranged from fetal cells to 101 years old. By analyzing the DNA markers for each of 52 cell types, the researchers were able to tease out patterns. They turned these patterns into an algorithm that can accurately predict the age of particular tissues based on the methylation of their DNA. When they comparedthese calculations with actual chronological ages, they found that their method was surprisingly accurate. How accurate? According to New Scientist

Horvath says the method is twice as accurate as the next best method of ageing tissue, which is based on the length of telomeres – tips of chromosomes that "burn down" with age like candle wicks. He says that his method has a 96 per cent chance of accurately identifying someone's age to within 3.6 years compared with around 53 per cent for telomeres.

Putting Aging to the Test

The algorithm is so accurate, in fact, it can differentiate between the individual organs within a person. Researchers found, for example, that healthy breast tissue is usually two or three years older than the rest of the tissues in a woman's body. This could be due to theconcentration of hormones in breast tissue and could potentially explain why the breast is the most common site of cancer for women. Heart tissue, on the other hand, tended to be about nine years younger than the rest of a person's tissue samples, most likely because it is constantly being regenerated by stem cells. On the extreme ends of the spectrum, researchers found that cancer cells are on average 36 years older than the rest of the body, whereas pluripotent stem cells are a constant age 0.

Keep in mind, though, that the clock is a statistical model that shows a correlation between DNA methylation and cells' age. There's no knowledge of causation at this point, according to the study

published Monday in Genome Biology. This means there's still a ways to go before scientists can tap into this apparent fountain of youth. Still, the theoretical applications are exciting to consider: narrowing down a list of murder suspects by determining his or her age from a blood sample. Or seeing how quickly various tissues are aging, so doctors may be able to identify cancer risks early on, and come up with highly individualized treatments. Image credit: Illarionova/Shutterstock