Woman Looks at Baby Photo and Sees Cancer from 4,000 Miles Away 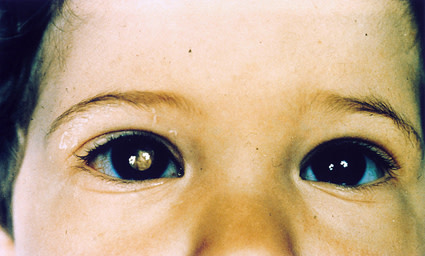 A British woman correctly identified a baby's eye cancer from 4,300 miles away, all because of some white-eye. Madeleine Robb, a woman from Manchester, U.K., had been exchanging baby pics with another new mom, Megan Santos from Florida, after the two became friends online. But what Robb saw in the picture alarmed her: Santos' daughter Rowan had a white glare in her eye, similar to the red glare people often have in photographs. But the white version can be a warning sign for retinoblastoma, a rare kind of eye cancer in kids under 5. After Robb warned her about the condition, Santos rushed one-year-old Rowan to the hospital, where a doctor confirmed she had the disease. Unfortunately, the baby will lose that eye. But if Robb hadn't seen the warning sign early, the cancer could've killed her. That white glow, called leukocoria, is really just the absence of the normal red glow, which comes from blood vessels in the layers of the eye behind the retina. When a tumor is present, it can deflect the camera flash's light out of the eye, which creates the white glow. Not every white eye-glow in a photograph is a sign of retinoblastoma—it's a rare disease that shows up in only about 300 American kids every year. But if you see it in a photo of a child, experts recommend you get it checked out. Interestingly, new technology to reduce the red-eye effect in photos will actually make it more difficult to pick out this strange warning sign of retinoblastoma. So if you have a small child, perhaps you should keep an old camera around in order to play Dr. House at home.