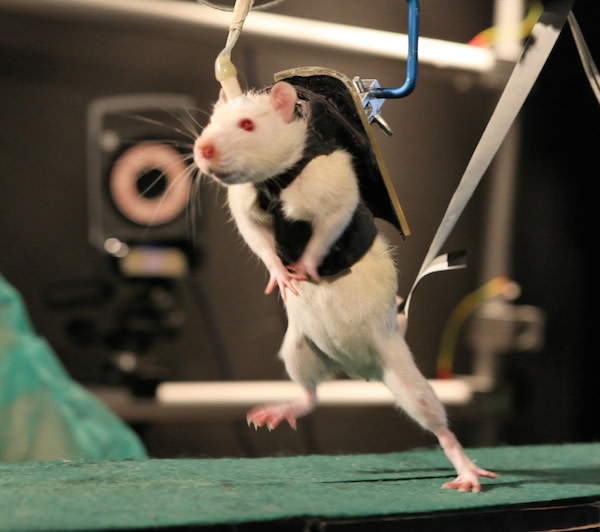 Although the spinal cord can recover from minor damage, severe injuries, like those that cause paralysis, are permanent...right? When deep cuts partially sever rats’ spinal cords, they isolate the lower part of the spine from the brain. Since that part of the spine is responsible for controlling the rats’ hind limbs, it leaves the legs paralyzed. A team of Swiss scientists tackled the challenge

of restoring the brain-to-limb connection, successfully re-teaching paraplegic rats to walk, run, and climb stairs. First, the researchers injected the isolated section of spinal cord with neuron-exciting chemicals called neurotransmitters. Then, they used electrodes on the outside of the spinal cord to send continuous electrical signals to those excited nerve cells. This chemical and electrical stimulation acted as a sort of molecular prosthesis for the signals that would normally come from the brain but that couldn't get past the spinal injury. However, the rats still lacked voluntary control over the isolated section of spine, and would move by dragging their bodies along with their functional forelimbs. To put the paraplegic rodents in a position where using their paralyzed legs would be their only option, the researchers put the rats in harnesses attached to a robotic arm, which supported them and held them upright so they had to walk bipedally (an action they were trained to perform before their paralysis). When harnessed rats with an active "neuroprosthesis" found themselves on a treadmill, reflexes took over: their spinal cord automatically responded to the moving ground and made their legs step along without input from their brains. Although the isolated section of spine had awakened enough to make involuntary motion possible, treadmill-only training did not help the rats take voluntary control of their hind limbs. To do so, they would need a longer training period on a stationary runway. 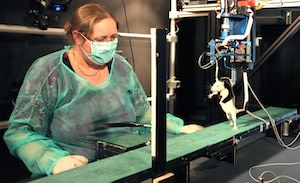 In runway training, the rats stood in their harnesses on a platform, tempted to move their legs and walk towards a piece of chocolate at the other end. After two to three weeks of daily 30-minute training sessions on both treadmill and runway, the paraplegics took their first voluntary steps, rapidly improving until, less than two months after their injury, they could walk while bearing their own weight for extended periods of time. The rats even learned to sprint and walk up stairs. When the researchers examined the rats’ brains and spines, they found that the density of nerve fibers had increased, and that neurons had formed new networks to reroute signals through the intact part of the spine, bypassing the severed nerve fibers. Is there new hope for humans with spinal injuries? The work has a long way to go. In order to walk, a paraplegic rat needed to be pumped full of chemicals and receiving electrical stimulation through its neuroprosthesis. In addition, the rats were only walking and running bipedally while harnessed to the support, which is not how rats usually move. What would happen without the harnesses? Would the rats still be able to balance and walk properly? Despite these reservations, the achievement is a testament to the resilience of mammals' bodies---and, of course, the motivating power of chocolate. http://youtu.be/ejwEqpV8ak4 [via Scientific American