It’s likely that people will get sick from attending protests — but how that compares to people getting sick for other reasons might be the bigger question. 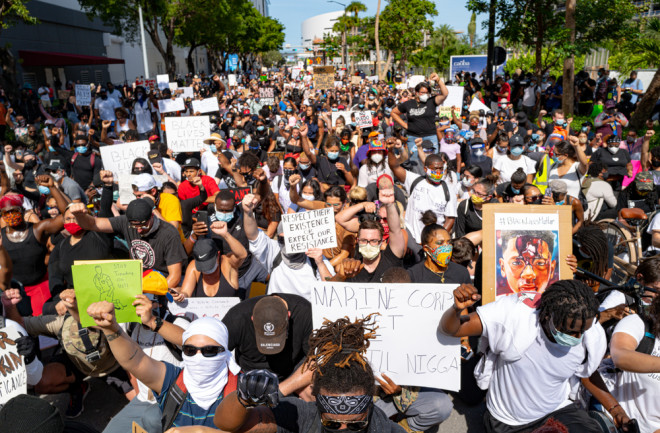 Today’s protest flyers ask something unusual of attendees: that they wear a mask and maintain distance from one another if they can.

Most people, including event organizers, haven’t lost sight of the fact that people coming together to protest against police brutality risk catching or spreading COVID-19. Gathering with crowds of strangers for hours at a time runs counter to the advice health officials have doled out for the past few months.

But if someone is looking to blame protesters for current — or future — increases in coronavirus cases, they’re going to have a hard time. People began assembling for marches and vigils right around the time when most states started reopening. Deciphering which events are responsible for an outbreak would be challenging, says Soumya Sen, a professor of information and decision sciences at the University of Minnesota. Plus, the consequences of people gathering, whether for protests or socializing, might appear later than expected, Sen says. “We’re not out of the woods yet.”

Theoretically, COVID-19 cases stemming from the protests could start appearing right about now. The earliest events began around the country on May 26 and 27, about three weeks ago. Meanwhile, the average infected individual takes five to seven days (and some people take up to 14 days) to show symptoms. If they require hospitalization, admission to the facility comes about a week after symptoms appear.

It’s likely there are people getting sick with the coronavirus because of their participation in the protests. Still, some cities have shown very low infection rates so far — of the 3,000 protesters in Seattle who got tested, fewer than 1 percent had positive COVID-19 results; attendees in Minneapolis and St. Paul, Minnesota, have shown similar rates. But even though protests are outdoors, “using a mask is critical during protests because you may not be able to maintain a safe distance from others, and people can be infected with COVID-19 but have no symptoms,” writes Raina MacIntyre, an epidemiologist at the University of New South Wales, via email.

Still, knowing whether or not new cases are due to the protests is challenging for researchers like Sen, who relies on data put out by public health departments. Sen and his colleagues run the COVID-19 Hospitalization Tracking Project, which tallies how many people go to health facilities and require medical equipment, like ventilators, in each state. Texas and Arizona are seeing alarming increases in their numbers of COVID-19 hospital admissions, but these cases might be residuals from when the states’ economies started opening back up in early and mid-May, Sen says. Some might be getting sick because they’re tired of social distancing. “We are seeing that people are getting kind of exasperated with staying home and letting their guard down a little bit.”

Additionally, serious changes in the coronavirus case load due to protests or reopened bars might appear later than the typical two- to three-week window. The typical protest or social scene isn’t packed with elderly folks; it’s more likely to be populated by young people who could bring the virus home and transmit the infection to their older relatives, who are more likely to be hospitalized for the infection. By the time those patients develop symptoms, go to the hospital and show up in Sen’s data, it could be more than a month after reopenings or protests began.

Sen suspects researchers will try and aggregate available data and figure out what events may or may not lead to changes in COVID-19 infections. Whether or not those analysis techniques will hold up to scrutiny has yet to be determined, but there are some private data troves that could fairly easily show who got infected where. Our cellphones come with us nearly everywhere we go, tracking where we are, for how long, and who else was there, Sen says.

If companies like Google or cellular service providers collecting this information had to, they could dive into their own data and figure out where COVID-19 patients acquired their infections. “There are other issues — privacy issues and whether the government wants them to do that,” Sen says. But in other countries with different attitudes toward this kind of information collection and sharing, phones have played an essential role in telling people who around them has the coronavirus. “We could do that quite easily, I’m quite sure,” adds Sen.

More From Discover
Technology
The Metropolis With Highest Density of Surveillance Cameras in the World
Technology
Experts Are Worried About “Deepfake Geography”
Mind
Fake News Spreads Like a Virus. These New Online Games Could ‘Vaccinate’ People Against Misinformation
Technology
How Dating Apps Changed Our Love Lives, for Better or Worse
Planet Earth
How the Inca Road System Tied Together an Empire and Facilitated Its Fall
Technology
With 5G, It's All About Speed
Recommendations From Our Store
My Science ShopCosmos: Possible Worlds
My Science ShopStrange Science
My Science ShopEinstein's Universe
My Science ShopElements Flashcards
Shop Now
Stay Curious
Join
Our List