Why You Crave Sugary Foods Even if They Taste Like Crap 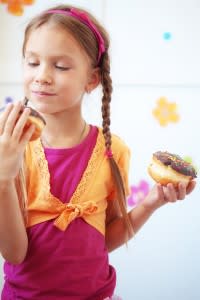 When, in a moment of weakness, you reach for that chocolate donut or bag of jelly beans, to all appearances your tastebuds are running the show. You imagine the snack's sweet taste; you might even salivate a little. If, on the other hand, these foods tasted like cardboard, you wouldn't be so tempted, right? Wrong. New research has found that it's not the taste of calorific foodstuffs that makes them enticing but rather their effects on our blood sugar. Our brain learns which foods are calorie-rich and drives us to seek them out. Researchers wanted to see precisely how these brain circuits worked, so they set up an experiment with 14 people and ten colorful drinks containing artificial sweetener. Participants tried and rated how good each drink tasted. The researchers then narrowed it down to the two drinks that all the participants found to be equally neutral tasting. Over the next four days, participants were given samples of the two colored drinks three times a day. Unbeknownst to the participants, though, there was one crucial difference in this part of the study: researchers had added 112.5 calories worth of maltodextrin (an odorless, tasteless carbohydrate) to one, while the other variety had zero calories. In order to see the effects of the calorie-rich versus calorie-free drinks, the researchers employed three tests: blood, brain and survey. Blood samples and brain scans showed how the participants' blood sugar levels and brain regions were reacting to the drinks, while surveys asked the participants to rate how sweet and likable they found the samples. The researchers found, unsurprisingly, that the calorific drinks increased glucose levels in the blood. More surprisingly, these drinks triggered more activity in the brain's reward center and were rated as more likeable even though participants didn't perceive them to be any sweeter. This likeability was a conditioned trait: while participants found the two drinks to be equally likable at the beginning of the study, they grew to like the calorific drinks more. This suggests that even though people couldn't taste a difference in the drinks, their brains had responded to the carbohydrate-rich drink's effects on their bodies by telling them it was more desirable. By the end of the four days, their brains had learned to anticipate and encourage the rewards of the calorific drink. The researchers published their results in Curent Biology last week. So it's not so much that our taste buds associate good taste with calories, then, but rather that our brains learn to associate a flavor with its ability to boost blood sugar. This is the first time scientists have been able to pull back the curtain and see that glucose metabolism is running this show. By identifying the neural circuits associated with craving sugar, researchers may be on track to figuring out which of these circuits are responsible for making some people more susceptible to weight gain.