Why Don't We Have an AIDS Vaccine? 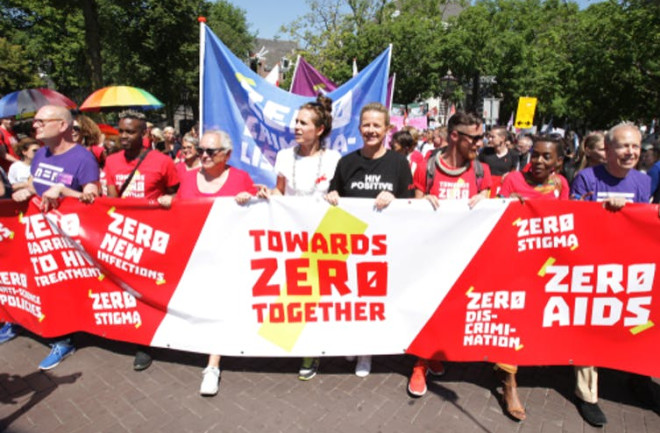 A demonstration for AIDS advances in July 2018 in The Netherlands, with Princess Margaret Van Orange pictured at the center. (Credit: Paolo Amorim/shutterstock) I mentioned to a friend, a gay man nearing 60, that World AIDS Day, which has been observed on Dec. 1 since 1988, was almost upon us. He had no idea that World AIDS Day still exists. This lack of knowledge is a testament to the great accomplishments that have occurred since World AIDS Day was created 30 years ago. It is also due to an accident in the timing of his birth that my friend escaped the devastation wreaked by AIDS among gay men in the U.S., before there was antiretroviral therapy. Many people have forgotten AIDS, but there are consequences to forgetting. The fight against AIDS is at a tipping point. Increasingly, there are signs that we may be heading in the wrong direction.

I am a social epidemiologist with more than 20 years of research experience in HIV and STD prevention. I am also the founder of The Basics with Dr. Mo, a sex health communications project that translates prevention science directly for people who need it most. It is true that global HIV/AIDS success stories abound: Mother-to-child transmission can be reduced to below 5 percent, 75 percent of people living with HIV know their status and 59 percent receive antiretroviral therapy. Most recently, Pre-Exposure Prophylaxis (PrEP) – the use of antiretrovial drugs to prevent HIV infection among those exposed – has proved to be a successful prevention approach. Yet the prize – a vaccine that can prevent HIV infection – remains elusive, and makes impossible the use of the only known strategy to have ever eradicated an infectious disease: widespread vaccination. That disease was smallpox, in 1980.

Despite the lack of a vaccine, in 2016 United Nations member states adopted a political declaration on ending the AIDS epidemic by 2030. As part of the accountability framework, interim 2020 goals set a target of 500,000 new HIV infections for that year. A review of the most recent data estimated 1.8 million new HIV infections in 2017, exactly the same number as in 2016. Prominent scientists have already begun to question the ability to eradicate AIDS by the 2030 deadline, and concede that the situation has stagnated. The attainment of eradication looks bleak, without the aid of either an effective vaccine or the immediate large-scale promotion and utilization of existing prevention tools (i.e., condoms, voluntary circumcision and potentially PrEP). Given that the vast majority of new HIV infections are sexually transmitted and that condoms have played a decisive role in the global control of HIV transmission, ongoing condom availability and use will be essential to future eradication. Condoms – both male and female – remain a highly effective mechanism of HIV/AIDS prevention, as well as of other sexually transmitted infections that greatly enhance the risk of HIV transmission. Condom use is also strongly advised by global public health institutions, including the World Health Organization and the U.S. Centers for Disease Control and Prevention, in conjunction will all other HIV prevention tools including PrEP, because of their lower levels of effectiveness in preventing transmission. Condom availability is a different matter and varies greatly from country to country. Countries with the highest levels of HIV often rely heavily on donor support. According to the most recent data, in sub-Saharan Africa in 2013, only 10 condoms were availableannually for every man aged 15 to 64 (as compared with the recommended 50 to 60), and, on average, there was one female condom available for every eight women. Funding required to maintain – let alone scale up – HIV commitments, particularly those dedicated to prevention, are increasingly uncertain.

Even though condoms are an extremely effective barrier method, it is usage that makes condoms efficacious in preventing HIV transmission. Reported condom use varies considerably around the world, and ranges from 80 percent use by men in Namibia and Cambodia to less than 40 percent usage by men and women in other countries, including some highly affected by HIV such as Sierra Leone and Mozambique. Age plays a role, too. Among young people aged 15 to 24, condom use at last sex varies from more than 80 percent in some Latin American and European countries to less than 30 percent in some West African countries. In the U.S., condom use is at the lower end of the spectrum: Only one-third of the population uses condoms, a number that has not changed significantly over the past two decades. The majority – 66 percent – of the world’s HIV/AIDS cases are in sub-Saharan Africa, where there has been much progress, particularly with the provision of antiretroviral therapy. However, there are worrying signs in other parts of the world. There has been little change in new HIV infections in countries outside of sub-Saharan Africa between 1990 and 2017. In fact, six of the 10 most populous countries in the world have experienced 10 percent to 45 percent increases in new HIV infections since 2010: Russia, China, Brazil, Pakistan, Mexico and Bangladesh. Even in countries such as the U.S., where new HIV infections have decreased by 8 percent overall, the rates of change are unevenly distributed. For example, young African-American men who have sex with men show no decrease in new infections; African-American gay and bisexual men represent the largest percentage of new HIV infections: more than one-quarter. The increased provision of antiretroviral therapy to people living with AIDS has had a huge impact on extending life and in preventing new HIV infections. However, there remains 25 percent of the population who live with HIV, about 9 million people, who do not know their status. While we have been necessarily focused on the head of the hydra in sub-Saharan Africa, other hydra heads are beginning to make their presence known, many in countries ill-prepared to deal with increases in the number of new HIV infections. In the absence of a vaccine, behavior change in the form of condom use promotion, acceptance and adoption, at a scale that many gay men utilized during the peak of the AIDS epidemic in the industrialized world, will need to occur. There are many challenges: continued stigma and gender inequality, not to mention issues of availability, distribution and proactive, nonjudgmental promotion. We must not forget. Progress on reducing the rate of new HIV infection has been done before. It can be done again, but only if we take forceful, funded action now. This article is republished from The Conversation under a Creative Commons license. Read the original article.