Why Do We Bother to Eat Bitter? 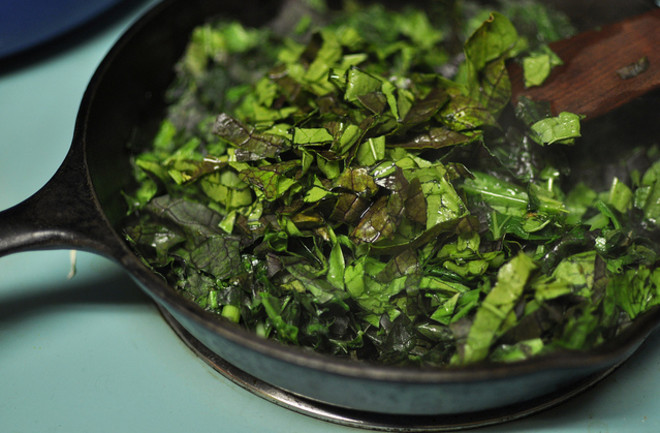 Mustard Greens (photo credit: Melissa McClellan/Flickr) Through exploration of the ancestral context of taste, scientists can better understand how modern humans use the sense of taste to make decisions and survive. Evolution has shaped our sense of taste to guide us to seek the food we need to survive, while steering clear of foods harmful to us. It is understandable that early humans who avoided spoiled meat and poisonous berries were able to pass down their genes, giving modern humans the ability to avoid them too. But what explains the countless humans who voluntarily consume, and even enjoy, some bitter foods? Why do we eat bitter greens? Brussels sprouts? Hoppy beers? Why do we tolerate some bitter flavors and not others? Tastes can be positively or negatively palatable depending upon their context among other food flavors. Sour fruit flavors like grapefruit or cranberry can be refreshing and delicious to eat, but sour milk clearly signals that the food has expired. These matches between tastes and flavors are called flavor congruencies. Most taste-odor flavor pairings are learned associatively through eating. Flavors associated with calories and nutrients become more pleasurable with time, whereas poisoning and illness teach us to associate foods with an unpleasant taste or disgust. For omnivores like us, learning the consequences of eating different foods is an indispensable survival tool. Because our range of food option is so vast, it is essential to sample many foods and connect their post-ingestive consequences with their perceived tastes. Bitter-tasting substances are innately disliked by infants and children presumably because most bitter compounds are toxic. Most children are drawn to all things sickeningly sweet, but as adults enjoy eating eat bitter Brussels sprouts. We learn to enjoy the taste of mildly bitter foods, especially when paired with positive metabolic and pharmacological outcomes. The more your body benefits from an ingested food, the more palatable it becomes [1]. Our bodies require phytonutrients such as flavonoids that cannot be physically separated from their vegetable carriers. Humans learn to tolerate low levels of bitterness in foods as they co-occur with nutrients in plants through a post-digestive reward/punishment system. For example, rhubarb contains 0.5% oxalic acid by weight, a substance that in large doses can cause joint pain and fatal kidney stones. The first time a child eats rhubarb, the initial taste response tells the brain that the food is bitter, toxic, and should be avoided. However, as the body begins to benefit from the essential nutrients in rhubarb without suffering any damage, the rhubarb becomes more and more palatable. Experiments show that rats can very quickly learn associations between tastes and metabolic and physiological consequences, perhaps in a matter of days. These associations occur after only a single trial and are strong enough to resist fading away even after multiple presentations of the food with no physiological consequences [2]. In humans, a large sugar molecule called maltooligosaccharide (MOS) presents a sweeter case of taste association. Human saliva transforms starch into MOS. Although MOS is tasteless, it activates brain reward centers in a manner similar to sugar, while non-nutritive sweeteners do not. Thus, a tasteless molecule that has positive metabolic outcomes can activate brain reward areas more effectively than a sweet-tasting substance that has little nutritional value [3]. The next time you eat mustard greens, stop to appreciate the complex process that allows you to taste and enjoy your leafy meal. Consider how your perception of taste has evolved, which has protected your ancestors from poisoning themselves. Reflect upon the incredible and complex mechanisms humans have developed to keep you well nourished. And if you still haven’t warmed up to greens, consider introducing them gradually into your diet. By exploiting the body's associative adaptation to taste, you could learn to love them. References Cited