Why chimpanzees can donate blood in movies 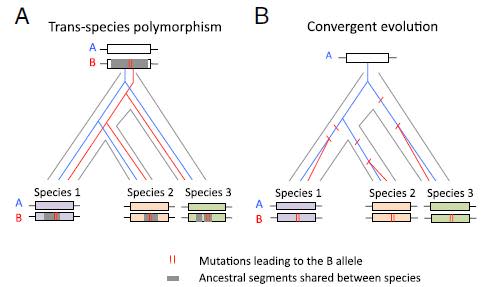 There is a high likelihood that you know of which ABO blood group you belong to. I am A. My daughter is A. My father is B. My mother is A. I have siblings who are A, O, B, and AB. The inheritance is roughly Mendelian, with O being "recessive" to A and B (which are co-dominant with each other, ergo, AB). It is also generally common knowledge that O is a "universal donor," while A and B can only give to individuals within their respective blood group and AB. Because ABO was easy to assay it was one of the earliest Mendelian markers utilized in human genetics. In the first half of the 20th century while some anthropologists were measuring skulls, others were mapping out the frequency of A, B, and O. Today with much more robust genetic methods ABO has lost its old luster as a genetic marker, especially since there is a strong suspicion that the variants are strongly shaped by natural selection. This makes them only marginally useful for systematics, which rely upon loci which are honest mirrors of demographic history. But there's another aspect of ABO which is fascinating: it transcends our species, and is found across many primates. That is why in film and television you have occasion to see chimpanzees donating or receiving blood from humans; they may share "our" blood group! Paradoxically, you may share the same ABO profile with a chimp, and not your own sibling. My understanding of this peculiarity was that ABO is under some sort of balancing selection, which maintain polymorphism. Even genetic variants which are favored by selection often go extinct at some point. Only a few rare alleles are maintained in the population through frequency dependent dynamics, where the strength of selection is inversely proportional to the frequency of the allele in question. The logic behind this is simple: if you have a rare "strategy" then there are few pathogens well adapted to it. Once your strategy spreads the pathogens "catch up," at which point the previous dominant strategy which has gone into decline can step up to the plate. Rinse and repeat. It is an eternal cycle of boom and bust. A new paper in PNAS explores this question more rigorously, with modern genomic methods. The ABO blood group is a trans-species polymorphism in primates (ungated preprint):

The ABO histo-blood group, the critical determinant of transfusion incompatibility, was the first genetic polymorphism discovered in humans. Remarkably, ABO antigens are also polymorphic in many other primates, with the same two amino acid changes responsible for A and B specificity in all species sequenced to date. Whether this recurrence of A and B antigens is the result of an ancient polymorphism maintained across species or due to numerous, more recent instances of convergent evolution has been debated for decades, with a current consensus in support of convergent evolution. We show instead that genetic variation data in humans and gibbons as well as in Old World monkeys are inconsistent with a model of convergent evolution and support the hypothesis of an ancient, multiallelic polymorphism of which some alleles are shared by descent among species. These results demonstrate that the A and B blood groups result from a trans-species polymorphism among distantly related species and has remained under balancing selection for tens of millions of years—to date, the only such example in hominoids and Old World monkeys outside of the major histocompatibility complex.

I was actually unfamiliar with the literature enough that I was not aware of the current consensus, that A and B may have emerged multiple times from diverse genetic backgrounds. What the authors here purport to uncover is that in fact A and B lineages are identical by descent. That is, the alleles which span dozens of primate species and ~20 million years derive from common ancestors, and are not reinventions of the wheel. Yesterday I blogged a paper which explored the difficulties of detecting selection from standing variation. Obviously balancing selection of this sort, if validated, is a much more tricky project due to the deep time aspect. Recall that there will have been ~20 million years, during which which recombination might shuffle the genetic background which flanks the identical by descent genomic tracts. The original signal of common ancestry is going to be extremely faint, especially when the rest of the surrounding genome has sharply diverged due to inter-species isolation. But the killer "app" of modern genomics is extreme precision and granularity compared to earlier classical genetic methods. Instead of the approximation you can get the whole sequence. In this paper the authors argued that one reason earlier attempts to discern identity may have failed is that the appropriate genomic regions are going to be extremely narrow, on the order of a few hundred base pairs. Once they zeroed in on the appropriate segment they generated a phylogeny with A, B, and O, across their species of interest. What they found is that A and B clustered together irrespective of species, while O was not particularly related. Why? The implication here is that A and B are deep clades which have persisted across the species' barrier, while O is a repeated loss of function mutation. Not only do A and B form natural clades, but the flanking regions of these two variants are more divergent than when one compares A to A or B to B. This is important, because if A and B emerged from distinctive genetic backgrounds repeatedly, then you would have a scrambled scenario of affinities, and likely no systematic difference. I am convinced by the arguments laid out in this paper, though to be sure these did not perturb my ignorant priors. And yet I am still curious as to the mechanism which drives such strong selection pressures that can maintain polymorphism across millions of years. It is natural to point to disease, but what sort of specific pathogen would haunt our branch of the tree of life for tens of millions of years? Citation: Laure Ségurel, Emma E. Thompson, Timothée Flutre, Jessica Lovstad, Aarti Venkat, Susan W. Margulis, Jill Moyse, Steve Ross, Kathryn Gamble, Guy Sella, Carole Ober, and Molly Przeworski, The ABO blood group is a trans-species polymorphism in primates, PNAS 2012 ; published ahead of print October 22, 2012, doi:10.1073/pnas.1210603109