Why brown people are midgets 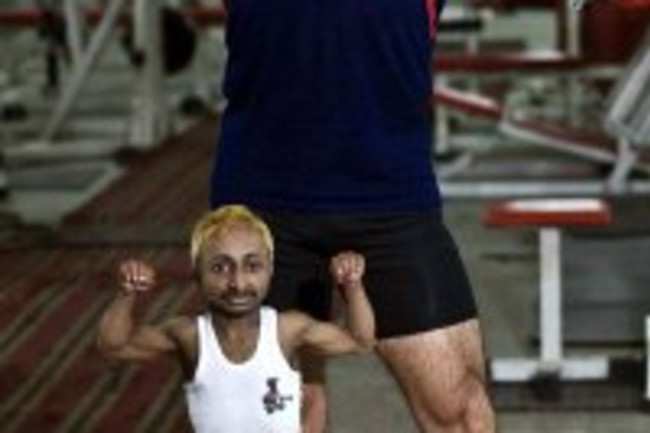 I'm 5 feet 8 inches tall. 1.73 meters. In the United States that's somewhat on the short side, most of the charts suggest I'm around the 30th percentile for white men. Of course, I'm not white. In any case, though I'm on the short side for the typical American male, I'm a giant in my family. My father is 5 feet 4 inches. My mother is around 5 feet now. They're possibly shorter than they were due to age, but they would have been short in the United States no matter what. As I was growing up, and surpassed my parents in my mid-teens, I assumed that their relative lack of height was a function of childhood nutritional deprivation. After all, they were born in Bangladesh! If I had thought it through that was probably a pretty stupid reason for assuming they were short; my parents were from affluent families. Affluent enough that older family members were comfortably plump. Additionally, as Muslims they had no food taboos aside from pork, and milk and meat were widely consumed (though fish was of course a primary protein source). Though a significant proportion of the population in Bangladesh, what was East Bengal, is malnourished, no one in my family fell into that category. But this is all post facto, there's a very specific reason I rejected my prior assumptions. I have three siblings and their heights are basically in the range of my parents (correct for sex, etc.). I'm the odd one out, not my parents. I have some "tall" uncles on both sides of my family, which in Bangladesh means around my height. My paternal grandfather was also relatively tall, reputedly above 5 feet 10 inches, while my maternal grandmother was tall for a woman in her youth. When I visited my family in 2004 one of my cousins was taller than me, around 5 feet 10 inches or so. He was the only one, there were a few who were around my height, but most were shorter. No one in my family is on the edge in terms of nutrition, though not approaching American obesity levels plumpness is not unknown even among young adults. Though we're not plutocrats on the whole, many of my cousins have professional jobs, accountants at NGOs or systems administrators at universities and what not. Nevertheless, among them I am a giant, and my brother at 5 feet 4 inches is typical. In the United States I've met two bloggers of my own Bengali ethnicity who were born and raised in American middle class comfort. Both were male and were shorter than me, one by a few inches, and the other by at least 6 inches! The N is small and probably not representative, but these meetings reinforced my new conviction that my family's small size is not due to their diet or some random fluke of nature. Here is something from the Wikipedia entry on Bangladesh:

With a land area of 144,000 square kilometers, ranked 94th), the population density is remarkable. A striking comparison is offered by the fact that Russia's population is slightly smaller. Indeed Bangladesh has the highest population density in the world, excluding a handful of city-states.

In all fairness, this is somewhat deceptive. Most of Bangladesh is arable land, so one can grow crops on it. In contrast, most of Japan is not. Dividing the number of people by arable land results in Japan being denser than Bangladesh! It still remains though that Bengal has long been reputed to be a populous region of South Asia. Here's a density map for Asia:

We know that more than half the variation in height is due to variation of genes in environments where nutrition is not a major issue. So it seems likely that height variation has a genetic component. It is a classic quantitative trait, it is in fact the classic quantitative trait in most textbooks. The variation is likely to be generated by many genes of small effect. If a trait is heritable that means it is possible for evolution to act upon a population so that the mean trait value changes due to differential fitness correlated with genotype. We know of one locus of relatively large effect in the context of height, and the height reducing allele is more frequent in East Asians. Therefore it is plausible that the between population differences in height are in part due to genetic differences (an admixture study would be good!). We also know among mammals that there is a pretty universal trend toward changes in size and proportion as one moves away from the tropics (stockier, somewhat larger). Finally, in human history our species has been shrinking since the last Ice Age, bouncing back only within the last century. It seems likely that this bounce back is in large part a function of superior nutrition. But even today our species is smaller than it was 10,000 years ago. There is a concomitant trend among agricultural peoples of greater gracility over time; dentition and bone morphology become less robust. You don't need to guess what my general guess is in terms of the cause behind of these trends: agriculture changed the parameters so that smaller individuals were at an advantage vis-a-vis larger ones. I believe agricultural peoples were usually at the Malthusian limit, and large individuals would be at disadvantage during marginal years. Of course hunter-gatherers were also at the Malthusian limit quite often, but it seems that there is a non-trivial body of work which leans toward the proposition that their diversified diet and lower population densities (because of lower carrying capacity conditional upon their lifestyle) resulted in greater mean physiological fitness. This might entail more slack during lean years for larger individuals, who otherwise might be advantaged in the reproductive race. Which brings me to a new paper, Life-History Consequences of Density Dependence and the Evolution of Human Body Size:

Previous attempts to explain variation in human growth and development emphasize the energetic constraints imposed by malnutrition and disease. However, this approach does not address the evolutionary effects of mortality risk on ontogenetic variation, a common theme in life-history studies. The conventional approach can be reconciled with life-history theory by considering the effect of mortality on the rates and timing of maturity in subsistence-based human populations. Humans slow down growth and development and demonstrate smaller adult body sizes in high-population-density contexts, presumably because of increased nutritional constraints and disease loads. In addition, there is evidence of mortality-based selection for relatively faster/earlier ontogeny in small-bodied hunter-gatherers living at high densities. This finding may be interpreted as an evolved reaction norm for earlier reproductive maturity and consequent smaller adult body size in high-mortality regimes. In sum, comparative results support density-dependent effects on body size that act through two pathways--nutritional constraints and juvenile mortality--at varying intensities, contributing to a nearly twofold range in body size across human societies. 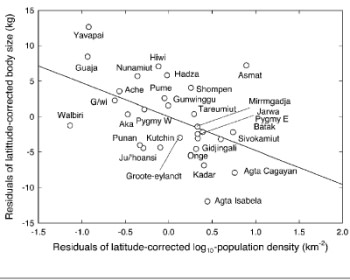 This chart illustrates the correlation. Of course, this only applies to hunter-gatherers, but I suspect the insight is generalizable. In Farewell to Alms Greg Clark observes that Asian societies (India and China) were notoriously lacking in nutritional variety and heft when it came to the typical peasant; meat was a rare luxury. Combine this constant stress with the incredible densities and I think between group differences are somewhat more explicable.