Where is MYBPC3 deletion found?

In some of the popular press pieces on the genetic variant which is implicated in heart disease among South Asians there are references to the fact that only 1% of the world's population carries it. Actually, that's obscuring an important piece of information: that 1% is almost exclusively South Asian, so that the 1% is simply 5% X 20% (20% being the proportion of the world's population that is South Asian). I've placed the table from the supplementary data which shows the populations in the HGDP data set which do, and don't, have the deletion on MYBPC3. 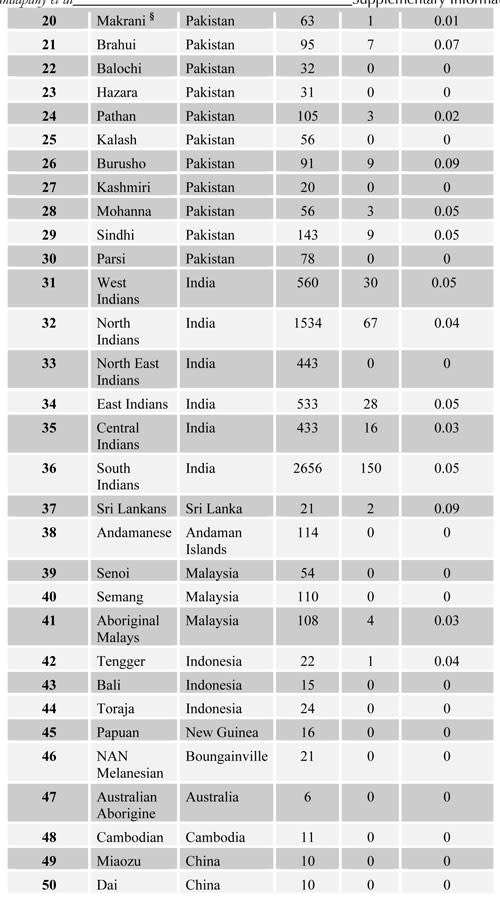 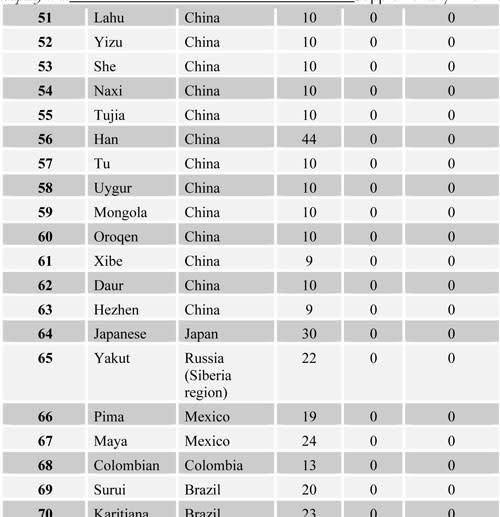 Notice the trend? Except for 2 populations every single group is South Asian, or arguably South Asian (e.g., the Pathans are Iranian speakers, not Indo-Aryan, and have a foot in the South Asian, Iranian and Central Asian worlds culturally, but they have almost certainly intermarried with Punjabis in Pakistan). The sample sizes outside of South Asia are small, so the frequency of the deletion is probably not 0%, but it is so low that no European or African population yielded anyone carrying it. None of the East Asian, New World or Oceanian groups either. The two groups where the deletion is found and have no relationship to South Asian populations are Aboriginal Malays and the Tengger, which I believe means the Tenggerese of the highlands of East Java. First, here is something suggestive of the Tenggerese: they are an ethnic group which has preserved the practice of Hinduism in Java! Unlike many Javanese Hindus who are recent converts from nominal Islam, Hinduism is the ethnic religion of the Tenggerese as it is for the Balinese. What about the Aboriginal Malays? From what I can tell Aboriginal Malays seem to be backward and non-Muslim Malays. There are old hypotheses that the Aboriginal Malays were the first Austronesian settlers of the Malaysian Peninsula, with later subsequent waves resulting in the majority of the Malay population, but the data seem much more equivocal. Rather, it is likely that Aboriginal Malays are among the broad swath of peoples who came down from the borderlands of China & Indochina in the wake of the last Ice Age. There I think two plausible models for how the Tenggerese & Aboriginal Malays came to carry the deletion: it was extant in South and Southeast Asia among the indigenous substrate, or, it was introduced by South Asians in the relatively recent past. I lean toward the second. The reason is that the peoples of Northeast India and Indochina do not carry the mutation. None of them. If it was part of the indigenous substrate it seems to me that one would find a few more hits among these peoples, even if at a low frequency. Rather, I suspect that the MYBPC3 was introduced during the phase of "Greater India," when Maritime Southeast Asia was dominated by Indian cultural influences and Indian merchants. Though the Aboriginal Malay are conceived to be indigenous peoples, it seems likely that they are simply relatively isolated Malays who were never Islamicized. In the recent past they may have been more integrated with the variegated Malay communities which had interactions with the outside world, including Indian inflected polities such as Srivijaya. More plausibly, within the relatively recent past large numbers South Indian laborers have settled in Malaysia. Some of these, especially the Muslim ones, have intermarried with the locals. Mahathir Mohamad is for example 1/4 Indian ethnically. As for the Tenggerese, we do not know with good detail how many Indians settled among the Javanese during the period when the two regions were in cultural contact. The working assumption is very few in proportion to the number of Javanese. But there is evidence of Indian genetic inputs in Bali:

...In contrast, eight other haplogroups (e.g., within H, J, L, and R), making up approximately 12% of the Balinese paternal gene pool, appear to have migrated to Bali from India. These results indicate that the Austronesian expansion had a profound effect on the composition of the Balinese paternal gene pool and that cultural transmission from India to Bali was accompanied by substantial levels of gene flow.

12% of Y chromosomal lineages almost certainly translates in a far lower proportion of the autosomal genome (total genome content). But it shows the possibility of Indian genetic impact on the peoples of Indonesia, and highlights how the Tenggerese yielded one individual carrying the deletion. Addendum: The authors make the same points I do in the supplement. Didn't see it until now.