When trees turn into brambles 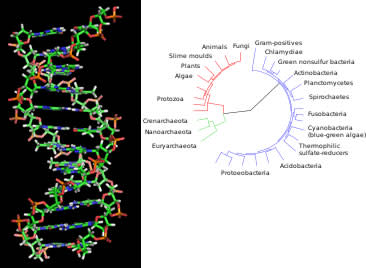 Genetics is powerful. The origins of the field predate Gregor Mendel, and go further back to plain human common sense. Crude theories of inheritance in the 19th century gave way in the early 20th to Mendelism, which happens to be a very powerful formal system for predicting the patterns of transmission of information from generation to generation. But I suspect that the popular accolades showered upon genetics would be more muted if it were not for the concrete discovery of the biophysical medium of that pattern of inheritance, DNA. By visualizing strands of DNA packaged into chromosomes one can gain a substantive understanding of Mendelian processes previously somewhat abstracted (e.g., recombination). In concert with the centrality of genetics at the heart of evolutionary science has been the ascendance of its methods in the older field of systematics. The phylogenetic tree is not only intuitive, but it has concrete reality in the sequences of base pairs or structural elements within the genome. Whatever skepticism there might be about the dynamic phenomenon of evolution, the material aspect of modern genetics rooted in molecular biology is one of he primary wedges by which one can introduce an element of doubt into minds of a skeptic. The correlation between phylogeny and sequence identity of organisms which were previously adduced to exhibit some sort of biological relationship on the tree of life can not be dismissed out of hand. But this mode of thinking has limits, albeit due to the quirks of human psychology. I began to think about this when reading Brian Switek's post, Inside the Columbian Mammoth, Signs of a Woolly Cousin. It's long and wide-ranging, so let me spotlight the section of particular interest to me:

On an anatomical basis, woolly and Columbian mammoths would be expected to be cousins which diverged from a common ancestor sometime between one and two million years ago. This is not what the genetic investigation found. “[T]he Huntington mammoth mitogenome is largely indiscernible from those of endemic North American WMs [woolly mammoths]”, Enk and co-authors wrote. The genetic readout of the Utah mammoth fell deep within the genetic diversity of woolly mammoths previously sampled from Alaska. This did not appear to be a case of contamination or mistaken identity – at a genetic level, researchers could barely distinguish a Columbian mammoth found in Utah from Alaskan woolly mammoths. What could this mean?

As I said, there's a lot more detail in Brian's post, so do read it. But one thing I want to emphasize: I think the results from the mammoth are far less surprising in light of what we're finding from other widespread large mammals. Consider the polar bears:

The bear family, Ursidae, is believed to have split off from other carnivorans about 38 million years ago. The Ursinae subfamily originated approximately 4.2 million years ago. According to both fossil and DNA evidence, the polar bear diverged from the brown bear, Ursus arctos, roughly 150,000 years ago. The oldest known polar bear fossil is a 130,000 to 110,000-year-old jaw bone, found on Prince Charles Foreland in 2004. Fossils show that between ten to twenty thousand years ago, the polar bear's molar teeth changed significantly from those of the brown bear. Polar bears are thought to have diverged from a population of brown bears that became isolated during a period of glaciation in the Pleistocene. More recent genetic studies have shown that some clades of brown bear are more closely related to polar bears than to other brown bears, meaning that the polar bear is not a true species according to some species concepts. Irish brown bears are particularly close to polar bears. In addition, polar bears can breed with brown bears to produce fertile grizzly–polar bear hybrids, indicating that they have only recently diverged and are genetically similar. However, because neither species can survive long in the other's ecological niche, and because they have different morphology, metabolism, social and feeding behaviors, and other phenotypic characteristics, the two bears are generally classified as separate species.

I am concerned with this passage today because of a re-emerging mismatch of evidence from the morphology of Middle Pleistocene humans and the genetics of Neandertals. Some paleoanthropologists have asserted that Europeans of the Middle Pleistocene were the exclusive ancestors of Neandertals. I have in the past written that Middle Pleistocene Europeans were among the ancestors of Neandertals, with sustained gene flow from other populations including Africa. The Sima de los Huesos people, maybe 600,000 years old, resembled the (much) later Neandertals in several aspects of their anatomy, as did other Middle Pleistocene Europeans. The genetic differences between living people and the ancient Neandertal genomes appear consistent with the emergence of distinct African and Neandertal populations only within the last 400,000 years or less. Such a recent date seems a poor match for the morphological evidence of Neandertal ancestry in Europe. I can think of several ways to make these morphological and genetic comparisons concordant with each other, all of which balance some shift in one body of inference against the other. As long as we can't pin down the human mutation rate within a factor of two ("What is the human mutation rate?"), there's a lot of room to make different population models consistent with the genetic data.

I have been told that the most recent genomic data indicating the red wolf is a wolf-coyote hybrid of post-Colubmian vintage is perplexing to some who have accepted the fossil evidence of a far older derivation from the gray wolf stock. But remember that fossils rely on visible phenotypes, which may diverge from what genes tells us. The modern red wolf may simply be the latest instantiation of a constellation of characteristics which have bubbled out of the froth of the morphological background repeatedly for nearly a million years! With the expansion of genomics from humans to a wide range of species I suspect that we'll see a lot more blurring of distinctions between species on the margins. This will be particularly true of those lineages with wide and continuous distributions. It will also be most salient and surprising for mammalian populations, where our prejudices about the primacy of a biological species concept are most strongly developed. 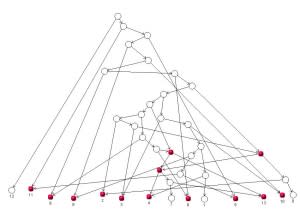 In a phylogenetic sense when you shift the grain of analysis to a finer scale the tree of life becomes much more of a bramble in many cases. We understand this intuitively when it comes to pedigrees which we constrain to within our demarcated species. Many of us have the same ancestor over and over in our lineage as we go back into the past. Similarly, why should we presume that closely related lineages have parted for all of eternity when they speciate? If you pull back far enough monophyly is obviously a pervasive phenomenon, but in many scenarios we're talking on the scale of ten million years, not one million. In hindsight it seems strange that people thought Neanderthals and African hominins could not interbreed despite a maximal separation on the order of ~500,000 years (in reality it seems plausible there was some gene flow between the two lineages in any case prior to the Neanderthal's absorption into the Neo-African modern populations). The second issue is that we must sometimes dethrone genetics from its determinative role in our understanding of how life is properly cataloged and evaluated. It may be that some phenotypes are recapitulated repeatedly from the ancestral genetic variation pool. This may have happened with the polar bear morph. Perhaps it happened with the mammoth lineages, as the Ice Ages waxed and waned. And perhaps it happened with the hominins of northern Eurasia! In the United States genetic criteria have become critical in application of the Endangered Species Act. Genes are concrete and often clear and distinct. Their physical reality and precision though may deceive us in the end. Does it matter if the red wolf of today is a recent hybrid of the gray wolf and coyote, while the red wolf of 10,000 years before the present was a 10,000 year old hybrid between the gray wolf and coyote?

COMMENTS NOTE: Any comment which misrepresents the material in this post will result in banning without warning. So you should probably stick to direct quotes in lieu of reformulations of what you perceive to be my intent in your own words. For example, if you start a sentence with "so what you're trying to say....", you're probably going to get banned. I said what I tried or wanted to say in the post. Period.