When Stubbornness in a Physician Nearly Proves Fatal 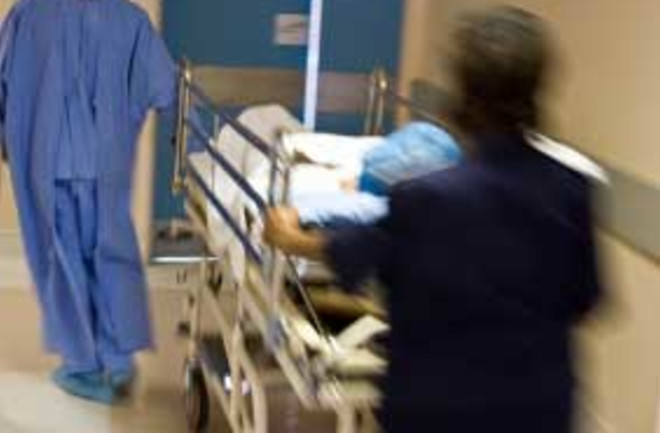 All was aflutter. The sixtysomething Chinese woman squirmed on her stretcher, hands trembling over her chest while her two daughters hovered anxiously. The emergency room din mounted as a note from the patient’s family physician appeared under my nose: “Status post neck sprain x 2 days, complaining of neck pain, bilateral arm numbness, weakness, dyspnea, need to rule out acute cervical disk herniation.”

The patient’s expensive-looking clothes and red hair—set off by loud gray roots—were my first clues. The note reinforced my initial impression: numbness (suggesting damaged nerves) and trouble breathing (suggesting asthma or pneumonia) for two full days? This had to be anxiety.

Trying to keep an open mind, I flipped to the triage nurse’s note. The chief complaint read, “Dizzy, lower back pain, neck pain x 2 days.” No help. Then the woman’s whole body began to shake. Now I wasn’t so sure about my diagnosis.

“Elsa,” I called out to her nurse. “She needs to be out of the hallway and into a room, on a monitor.”

Ten minutes later, translator at my side, I got a second shot. The daughters gathered round. The woman looked calmer as the monitor flashed normal vital signs: blood pressure, pulse, oxygen saturation, breathing rate—all A-OK.

The symptoms had begun while she was making love to her husband two days earlier. Sudden dizziness at first. Then he pulled her to the side, which triggered shooting pain down her arms. How hard had he yanked? Not so hard. Had they been quarreling? (First rule of whodunits: It’s always the spouse.) No. Had the symptoms worsened or changed over the past two days? No. Was she a nervous type of person? No. Any psychological problems? No. Otherwise healthy? Yes—a little high blood pressure, nothing more.

“Do you feel pain anywhere?” I asked, placing my hand on her head. “Here?”

A burst of Mandarin: “My back.”

The daughters piped up. “Her back has been hurting for months.”

“But why is she here today?”

“No.” (That would have been too easy; vertigo is common and usually benign.)

“And no chest pain?”

“What’s wrong with her?” one daughter wanted to know.

“Beats the heck out of me” would have been the honest answer. To buy some time, I resorted to the Universal Doctor’s Dodge: “We’ll run some tests.”

It had to be anxiety. Those vague, unconnected symptoms could only be psychological. Besides, my patient looked fit as a fiddle. This was classic attention-seeking behavior: The oversolicitous daughters, the dyed hair, the fluttering.

Fifteen minutes later, one of the daughters accosted me in the hallway. “My mother’s numb from the neck down!”

“Not possible,” I almost blurted out. If the spinal cord were compressed enough to cause total body numbness, there should be arm or leg weakness too.

Back in the room, my patient had launched an energetic imitation of Lamaze breathing: puff, puff, puff. “Why is she doing that?” I asked the daughters.

“It makes her feel better.”

It was making me feel worse. Was I missing something? Again I checked the strength in her arms and legs. Normal. Then it hit me: Hyperventilation can cause numbness. This was anxiety. I found Elsa.

“Let’s give her Ativan (a Valium-like drug), one milligram IV. She needs to calm down.”

I returned to her room and told the family, “This will make her feel much better.” Emboldened by my own decisiveness, I continued, “We’ll get a CT scan of the neck.”

The first doctor had raised the possibility of a bulging disk. The CT scan would appease him and the family. Problem was, getting a neck scan for a presumed neuro­logical deficit meant we had to rule out stroke as well. Otherwise, the radiologists would think I’d lost it.

“And we’ll get a scan of the head,” I added. The smiles widened.

Twenty minutes later, I peeked into the room. The woman lay back, eyes closed. Success. A daughter walked over and whispered, “She has not had the CT scan yet. When?”

“Your mother looks better, doesn’t she?”

A half hour later, working through my backlog of patients, I spied my redhead returning from the scanner. I rang up the radiologist. “Say, Russ, could you take a quick look at this scan? Story is, her husband pulled on her arms two days ago. Claims she’s numb from the neck down, but I’m not convinced. Just tell me it’s normal and we can send her home.”

“Sure,” came the answer. I waited on the phone for a good 45 seconds. Then there was a shout: “She has a subarachnoid!”

“Pull up the head scan. Subarachnoid.”

On the radiology screen in the emergency department, a white blush highlighted gray whorls of brain. “Jesus,” I muttered. “She said it was her neck.”

Subarachnoid hemorrhage springs from a leak in one of the delicate arteries that snake between the brain and the arachnoid membrane, the brain’s cellophane-like covering. The culprit is a berry aneurysm, a slight (one-eighth to one-third of an inch) ballooning of the artery in the circle of Willis, a network of arteries at the base of the brain. When the balloon ruptures, the sudden jet of blood typically triggers a thunderclap headache along with vomiting and loss of consciousness. Smaller leaks, however, may cause only confusion or back pain (which is why emergency physicians see subarachnoids lurking behind every headache or case of the dizzies). Often the instigating event is sudden exertion, like lovemaking. The textbooks, I learned long ago, have a term for this: coital subarachnoid. A classic diagnosis.

Instead of fleshing it out with probing questions, I had let my patient’s squirrelly symptoms and dyed hair throw me off the scent, interpreting each new finding as confirmation of my original bias. I hustled back to the patient’s room and asked the daughters, “When she felt bad that night, did she have any headache at all?”

We had to hurry. If patients survive the first arterial leak, chances are fearsomely high that a second one, days or weeks later, will kill them.

“Maybe some headache, yes. But it went away.”

“Once or twice, but then it stopped.”

The nuggets had been there; the doctor just hadn’t panned thoroughly enough.

Everything clicked into place: Hyperventilation lowers pressure inside the skull by constricting blood vessels. The Lamaze breathing had made her feel better. The numbness? Probably due to the blood irritating her brain and spinal cord.

Now we had to hurry. If patients survive the first arterial leak, chances are fearsomely high that a second one—days or weeks later—will kill them.

I pulled the daughters out of the room. And hoped to God I hadn’t come across as dismissive before. “Your mother has blood in her brain. A vessel has burst. She might need an operation.”

They covered their mouths.

“We need to send her uptown immediately,” I said, as we arranged her transport to a hospital with an angiography suite.

The rise of interventional radiology has radically changed the treatment of brain aneurysms. The first step is still an angiogram, in which radiopaque dye is injected into the cerebral arteries so they can be fluoro­scoped—the image appears as black tendrils against a ghostly white background—and the leak pinpointed. In the old days (the mid-1990s), brain surgery came next. A piece of the skull was lifted, the brain burrowed into, and a clip fastened across the neck of the aneurysm. Nowadays, once the angiogram finds the defect, a tiny platinum coil can be threaded up the vessel and into the aneurysm. There, the coil spawns a clot that seals the opening. Coiling, compared with surgery, halves the rate of post-op seizures, according to a study in The Lancet, though it does have a higher rebleed rate.

My patient’s aneurysm bulged off the top of the right carotid artery. The coil went in smoothly and plugged the defect. Some subarachnoid patients have brain artery spasms caused, it is thought, by the irritating effect of blood outside the arteries. Luckily, my patient had none of those. She went home with her daughters, anxiety-free, a few days later.

As for myself, I could only paraphrase an old adage: If you can’t be smart, at least be lucky.

More From Discover
Health
The Other Magic Mushroom: Why a Canadian Startup Is Suddenly Interested in the Fungus From Super Mario
Health
How To Avoid Food-Borne Illness
Sponsored
Health
Leptitox Reviews - Is It Worth the Money? (Cheap or Legit?)
Recommendations From Our Store
My Science ShopCosmos: Possible Worlds
My Science ShopStrange Science
My Science ShopEinstein's Universe
My Science ShopElements Flashcards
Shop Now
Stay Curious
Join
Our List