A problem that comes from the heart. 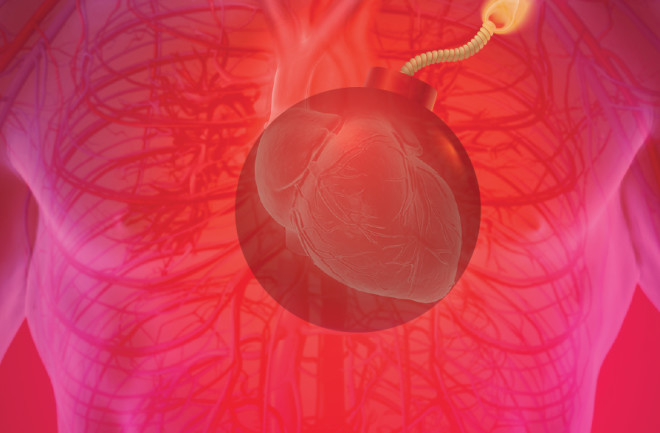 Scott arrived in the emergency room by ambulance around 3 p.m., complaining of chest and abdominal pain. The medics described him as pale and sweaty, and said he may have passed out for a few minutes when the pain began. A seasoned triage nurse’s immediate reaction: “He doesn’t look right.” That’s the last thing an ER physician wants to hear when a patient arrives.

Scott was a mostly healthy 48-year-old with untreated high blood pressure. His initial cardiogram showed possible signs of reduced cardiac blood flow and maybe even a heart attack. But after negative cardiac blood tests and improvement in Scott’s symptoms, the team agreed that nothing was immediately life threatening.

Healthy middle-aged men complain of chest pain and upper abdominal pain for dozens of reasons, from indigestion to something serious like a heart attack. Best guesses on Scott’s chest pain: high blood pressure, a stomach ulcer, a panic attack. The plan was to admit him to the hospital for observation and more cardiac testing. We’d keep him in the ER until a hospital room became available.

At 8 p.m., Scott looked comfortable when our team huddled around his stretcher, squeezed next to other patients on a crowded Friday night. He was chatting with his family as they drank apple juice from plastic cups.

He was still with his family a couple of hours later, but his arms were crossed on his belly, and he was slowly rocking back and forth. He was a little sweaty. And he had that pale look the nurse had noticed earlier.

Scott’s work-up revealed no objective signs of trouble. No fever, no increased heart rate, nothing scary on the heart monitor. I swung around to his stretcher to do a closer exam. He told me his belly hurt, and he felt mild pain when I pressed on the right upper part of his abdomen.

Maybe this wasn’t a cardiac problem after all. Scott might have painful gallstones or, at worst, cholecystitis: inflammation of the gallbladder that can be excruciatingly painful, comes in waves and causes some people to pass out. A quick ultrasound could detect gallstones or kidney stones, even internal bleeding. I decided to take a peek.

For many of us who trained in the past 15 to 20 years, the ultrasound machine is a second stethoscope. The technology first made its way into the ER via the trauma bay as a tool for a FAST (focused assessment with sonography in trauma) scan. Scott’s FAST was negative. I moved the ultrasound probe up to his gallbladder to look for gallstones. Nothing.

I like to think I am smart enough to reason my way to a diagnosis, even in patients with vague or confusing complaints. But something didn’t make sense. His pain was severe and unexplained. While the odds favored something harmless, his symptoms suggested it could be far more serious.

Training in emergency medicine means you are constantly asking yourself, “What is going to kill this patient today?” That’s different from what most students are taught in medical school, which is to ask, “What is most likely?” In the ER’s intentionally paranoid world, headache means brain bleed until proven otherwise, chest pain means heart attack, and abdominal pain means. . .

I slid the probe to the middle of Scott’s belly, pressed a little harder to get intestines out of the way and found his aorta, the main artery that carries blood under high pressure from the heart’s left ventricle to the abdomen, pelvis and lower extremities. The thick-walled aorta is usually about 2 centimeters in diameter. It pulsates on the ultrasound screen when pressure is applied.

The diameter looked right. But as I rotated my wrist 90 degrees so that the ultrasound could show me a picture of the aorta lengthwise, the image stopped me cold. The information that made everything else fall into place pulsed along with the patient’s heartbeat on the screen. A thin but unmistakable bright line bisected the vessel, flapping back and forth in the middle of the blood-flow area. I was watching, in real time, an acute aortic dissection. Scott’s aorta was shredding itself in two.

In an aortic dissection, the flap is the innermost of the aorta’s three layers, which — because of high blood pressure, atherosclerosis or an inherited disease — tears loose from the surrounding outer portion. The tear allows high-pressure blood to flow between the layers, which loosens them. The dissection splits the aorta along a path that can travel from the aortic valve through the chest and abdomen.

Dissection is as rare as it is deadly. Each year, there are roughly three to four new cases of aortic dissection out of 100,000 people in the general population. That number may be an underestimate, however, as the condition is often missed even after multiple medical visits, or because patients die before evaluation.

It’s a hard one to diagnose. In 1996, Jonathan Larson, who posthumously won a Pulitzer Prize for drama for the landmark musical Rent, visited two New York City hospital emergency departments over three days, complaining of severe chest pain and shortness of breath. A New York State Health Department investigation found that Larson was twice discharged with diagnoses of “food poisoning” and “viral syndrome,” according to the department’s report. Roughly 24 hours after leaving the ER, Larson, age 35, was found dead on his apartment floor. His autopsy revealed an aortic dissection.

For an emergency physician, diagnosing a condition so ominous is a little unnerving. Suddenly you’ve identified the sickest patient in the ER. The patient’s survival now depends on dozens of health care providers, a specialized operating room and an intensive care unit, if the patient is lucky. In an acute dissection, the mortality rate can increase by as much as 1 percent every hour after symptoms appear.

It was now shortly before midnight, nine hours since Scott arrived. A thought filled my head: This guy is going to drop dead in front of us unless we do something right now.

An emergency CT scan revealed a dissection that started at the ascending aorta, near the origin of the coronary arteries, which supply blood to the heart. It extended over the aortic arch, down the descending aorta through the abdomen and into the smaller arteries that supplied blood to the brain, intestines and kidneys. This was a huge dissection, encompassing the aorta’s entire course and several smaller branches. Any further interruption of blood flow along that path could deprive Scott’s bowels, liver or brain of oxygen.

Before sunrise, cardiac surgeons replaced most of his ascending aorta and arch with a synthetic graft, essentially sealing off the leak. A new aortic valve completed the repair, since Scott’s own valve was too damaged to function properly after the dissection.

Scott spent a few days in the cardiothoracic intensive care unit, fighting through a minor infection and the pain of open-heart surgery. He left the hospital a week later with prescriptions for several medications, including four different drugs to control hypertension. Though the exact cause of his dissection remains unknown, it was likely due to untreated high blood pressure and possibly an inherited component yet to be diagnosed.

As an emergency physician, I often wonder how close I’ve come to catastrophe by missing a diagnosis. On a busy night, the emergency team risks the temptation to overlook the patient with seemingly unrelated symptoms who isn’t in obvious distress. Equally dangerous conditions can be subtle and elusive, becoming apparent only after time, thought and re-evaluation. And then there’s that final lesson: Always respect the look.

Christopher Tedeschi is an emergency physician at New York-Presbyterian Hospital and assistant professor of medicine at Columbia University Medical Center. The cases described in Vital Signs are real, but names and some details have been changed.

[This article originally appeared in print as "Under Pressure."]