What Will Our Telomeres Tell Us?

Nobel Prize–winner Elizabeth Blackburn's company will soon begin selling a test of telomere length to consumers. Whether that information will actually help improve people's health remains to be seen. 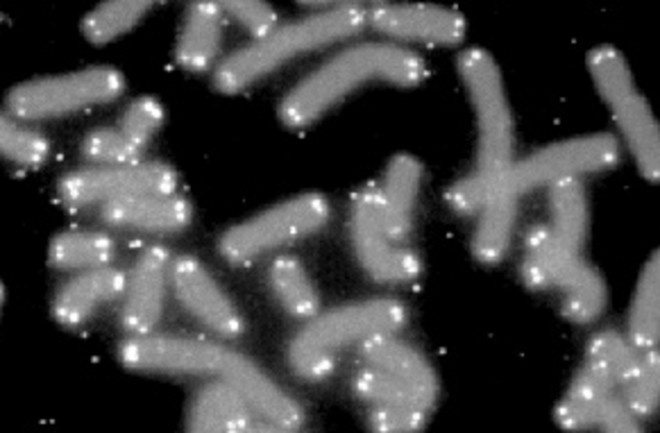 When it comes to the science of aging, there are few discoveries as intriguing as telomeres.

These caps at the ends of chromosomes protect your genes from being eroded each time a cell divides. When your telomeres are finally eaten away after many years, your cells begin to show signs of age, and this process may be a key part of what makes us grow old. Telomeres’ partner in crime is the enzyme telomerase, which helps keep telomeres long and healthy, a property that’s made it the subject of almost science-fictional fascination: it confers immortality on cancer cells and, in a landmark 2010 study, reversed the aging of telomerase-deficient rats.

Our discoveries of telomeres and telomerase open a Pandora’s box of difficult questions. Like a candle that burns an inch each hour and thus functions as a clock, can the length of our telomeres tell us how much longer we have to live? Can it tell us whether we’re more likely than others to get aging-related diseases like heart disease, cancer, or a stroke? (And do short telomeres cause disease, or just come along with it?) If our telomeres have grown dangerously short, can we do anything to keep them from shortening further?

Now, in a move that brings these questions into sharper focus for the general public, Telome Health, founded by Elizabeth Blackburn, who won the Nobel for Medicine for her work in this area, has announced that it will bring to market a test for telomere length. The company already provides such a test for research use, but its website states that in the fall of 2011, it will release a test for the general public.

Here’s how it will work: You provide a swab from your cheek or a blood sample, and the test will examine the telomeres in white blood cells—which are part of the immune system and thus bellwethers when it comes to certain health problems—and compare their length with those of other individuals of about the same age. Blackburn has told New Scientist that the tests will be available through doctors and will cost less than $200. But it's not yet clear exactly what we'll get from the service: will we just get a number representing length? How will we be able to apply the test result to our lives?

Some of the big questions about telomeres have begun to be answered. Telomere length does seem to be linked to life span; one key study in The Lancet found that otherwise-normal people over 60 who started out the study with short telomeres were more likely to die over the next 17 years than those with long telomeres. And shortened telomeres do appear to correlate with a higher risk of certain diseases, sometimes quite strongly: Numerous studies have found a connection between short telomeres and higher risk of cardiovascular disease, and in The Lancet study, those with short telomeres were three times as likely to die of heart disease and more than eight times more likely to die of infectious disease than those with longer telomeres. Some studies suggest there’s a connection between shortened telomeres and some types of cancer, but not other types of cancer (see a comprehensive listing of papers on the Telome Health site).

None of these studies have shown a causal relationship yet—in other words, we can’t say whether shortened telomeres are a cause of major diseases or just a reflection of them. For now, the only diseases clearly caused by shortened telomeres or dysfunctional telomerase are rare premature aging disorders like dyskeratosis congenita. But well-designed studies looking at telomere length and signs of health like resting heart rate have begun to provide new details concerning telomeres’ effects on biological processes, which may help us establish causality in the future. And there’s enough evidence of a connection to disease, causal or not, for folks to start wondering what their telomere length means for the future.

The most important question for people taking the telomere test, though—whether you can do anything about your shrinking telomeres, if indeed they cause disease—is the one that still needs the most research. Some studies have shown associations between telomere length and exercise, stress, diet, and smoking. For instance, one small study found that people who ate healthier diets, did yoga or meditation, and exercised daily increased the activity of telomerase, which could lead to longer telomeres. But it had no control group, which means the study needs additional confirmation. This area of research is in its infancy, and it will take many studies whose results can be compared, analyzed, averaged, replicated, and so on to make reasonable public health suggestions. How much a certain change—say, running or cutting back on fat—is going to affect your telomeres, if at all, is a level of specificity that the research can’t yet provide. As a result, the readout of your telomere length test won't come with detailed information about what to do about it.

Perhaps most importantly, the lifestyle suggestions such observational studies have pointed toward aren’t new—they’re already routinely recommended by doctors to patients. “If overweight, losing some extra weight or reducing waist circumference [may help],” says the Telome Health site. Eat less red meat; try to relax. We've heard that many times before, and presumably people are obeying that advice as much as their motivation and self-control allows, which is to say not nearly as much as we'd like. Without instructions more specific than the usual boilerplate, our telomere lengths may be more interesting, reassuring, and ominous, than actually useful.

The personal telomere test, like the personal genome test, is coming at a time when we've still got many more questions about what it will reveal than solid answers. But the test, when it arrives this fall, will certainly make it all the more pressing for these questions to be answered. And maybe people who use the test can help clarify the connection between telomeres and health: If Telome Health lets users contribute (or actively entices them to contribute) their results and detailed medical histories to science, we could all help bring the picture into better focus.