What is the Flavor of Los Angeles? 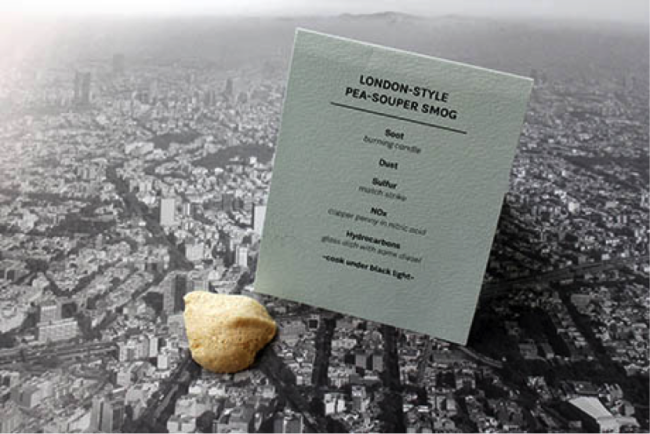 Photo Credit: Edible Geography When thinking of an airy, sugary meringue, baked Alaska or pavlova may be the first words to come to mind, but smog? Not quite. You may have heard of the term terroir which explores changes in flavors based on differences in geographical locale, but aeroir is a rather new phenomenon. How can one possibly explore the tastes of air-- or rather air pollution? At the Center for Genomic Gastronomy, food scientist Nicola Twilley whipped up a simple solution for this fascinating question. Why not make smog-flavored meringues! Upon reading Harold McGee’s bible of food science-- On Food and Cooking: The Science and Lore of the Kitchen-- co-founder of the Center for Genomic Gastronomy, Zach Denfeld discovered that meringue foam is 90% air. Thus, emerged the ingenious idea of “harvesting” the air quality of various cities. In a quasi-sensory explosion for your taste buds, but more so a commentary on the politics behind urban pollution, Twilley and fellow scientists “harvested” air once the egg-white foam reached the ‘stiff peak’ stage. The meringues were whipped up in various locations such as on rooftops, roadsides, and waterways. 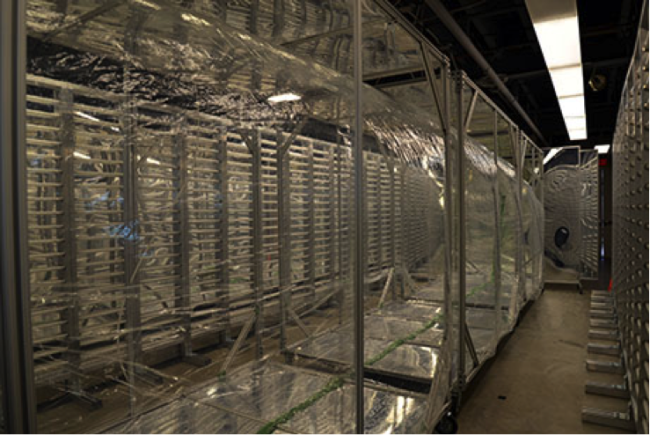 Mobile smog chambers and rows of UV lights which 'bake' the smog. (Photo Credit: The Forager) In the process of recreating smog conditions, scientists injected calculated amounts of precursor chemicals into a Teflon smog chamber, where UV light was shone to catalyze the chemical reactions that form smog. As each city contains unique precursor emissions, varying in weather conditions from temperature and humidity to precipitation, each geographical region thus has a uniquely flavored meringue. For instance, in recreating the smog of an agricultural setting, students combined “ammonia and amines from feedlot manure lagoons and other organic waste…[mono-nitrogen oxides] NOx and incompletely combusted hydrocarbon emissions from cars, power plants, and industry…” [1] Harold McGee describes how these chambers were constructed to replicate air pollution around the globe, drawing chemicals emitted from tailpipes, smokestacks, and feedlots [2]. Variations of smog can thus be created with the help of ultraviolet lights. As scientists create meringues for various cities around the globe, we can better understand the how air quality and pollution can affect the flavor of foods we eat. The atmosphere in Atlanta is one of the worst air qualities, running alongside that of Los Angeles [1]. Ten percent of emissions consist of terpenes--which are chemicals that stem from organic matter, whether that be pine trees or green matter that is decaying [3]. In addition to these fascinating studies, the Center for Genomic Gastronomy also publishes the journal, Food Phreaking, which explores up and coming experiments within food science and examines the places where food, culture, and technology intersect. As technology becomes progressively more intertwined with everyday life, our experiences with food can reach new and fascinating heights. Could tasting the cloudiness and mugginess of a smog meringue be the recipe for combatting air pollution? References Cited: [1] Smog Tasting: Four Years of Tasting Unexpected Ingredients. The Center for Genomic Gastronomy with Nicola Twilley. The Forager Magazine.http://www.theforagermagazine.com/4/7 [2] McGee, Harold. The Flavor of Smog. Lucky Peach Magazine. http://luckypeach.com/the-flavor-of-smog/ [3] Twilley, Nicola. Smog Meringues. Edible Geography: Thinking Through Food. http://www.ediblegeography.com/smog-meringues/ 30 May 2015.