What if fitness & migration were random?

There are many ways one can model population genetic dynamics. A simple avenue is to imagine a deme, a group of breeding individuals, subject to a few major parameters which are modulating genetic variation. Mutation, migration, random drift and selection. A model being what a model is, one's goal is to simplify, utilize approximations, and still manage to extract insight as to the relevant aspects of the dynamics one is focusing on (unless you're Stephen Wolfram). One of the major upsides of the Price Equation is that it makes no compromises, rather, it starts from first principles and tightly encapsulates what is known verbally into a formal notation. And, as I stated earlier, this formal system may be expanded so that greater complexity may generate richer inferences. Sean Rice, author of the densely mathematical Evolutionary Theory does just that with a recent paper, Evolution with Stochastic Fitness and Stochastic Migration:

Methodology/Principal Findings We derive an exact equation for directional evolution, essentially a stochastic Price equation with migration, that encompasses all processes, both deterministic and stochastic, contributing to directional change in an open population. Using this result, we show that increasing the variance in migration rates reduces the impact of migration relative to selection. This means that models that treat migration as a single parameter tend to be biassed - overestimating the relative impact of immigration. We further show that selection and migration interact in complex ways, one result being that a strategy for which fitness is negatively correlated with migration rates (high fitness when migration is low) will tend to increase in frequency, even if it has lower mean fitness than do other strategies. Finally, we derive an equation for the effective migration rate, which allows some of the complex stochastic processes that we identify to be incorporated into models with a single migration parameter. Conclusions/SignificanceAs has previously been shown with selection, the role of migration in evolution is determined by the entire distributions of immigration and emigration rates, not just by the mean values. The interactions of stochastic migration with stochastic selection produce evolutionary processes that are invisible to deterministic evolutionary theory.

Complexity is the name of the game. In the paper Rice doesn't apologize for the near impenetrability of the alphabet soup, since the Price Equation is derived from first prinicples he asserts that if the axioms lead to complexity it is not nearly as undesirable than if his formalism was a more approximate model which already nakedly distorted aspects of reality. Here are the central equations around which the paper hinges: 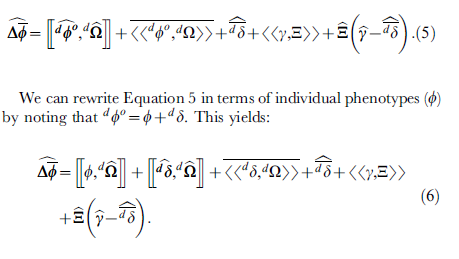 The fact that this is a descendant of the Price Equation becomes clearer when you know that [[ ]] and <> represent covariances (of individual entities and random variables respectively) while the ^ represent expected values. And here is the alphabet soup of variables in case you are inclined toward decrypting the equation's meaning: 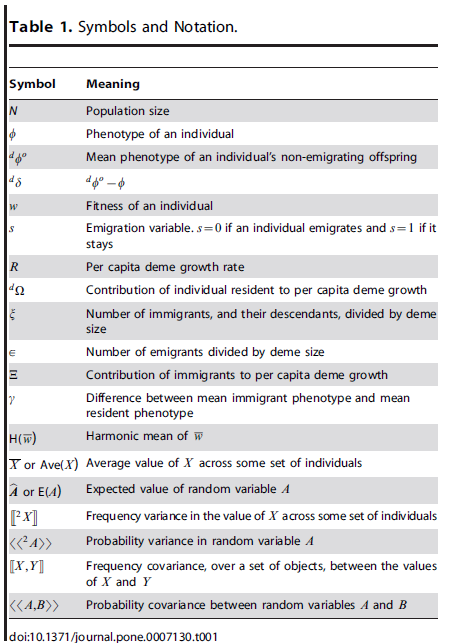 The paper is Open Access, so you can read through the equations, and their derivations yourself. It seems that the major message is clear:

if you treat migration and other "parameters" as random variables the effect on evolutionary process may be surprising.

It seems a consistent finding from the model in this paper is that variance in migration rates would tend to reduce the efficacy of it as a processes which would diminish the tendency toward local adaptation or selection, and homogenize populations. It is a truism that only 1 migrant per generation is necessary to maintain similarity in allele frequencies across demes which random drift would otherwise drive apart (see neutral theory for why). But if the average is 1 migrant per generation, but the variance is non-trivial, then its power to equilibrate gene frequencies is reduced. The analogy to long term effective population size seems clear; the greater the population variance the more salient stochasticity is as an evolutionary process shaping genetic variation. The long term effective population is the harmonic mean, closer to the low than high values in population size (ergo, bottlenecks). Figure 3 illustrates the importance of variance well: 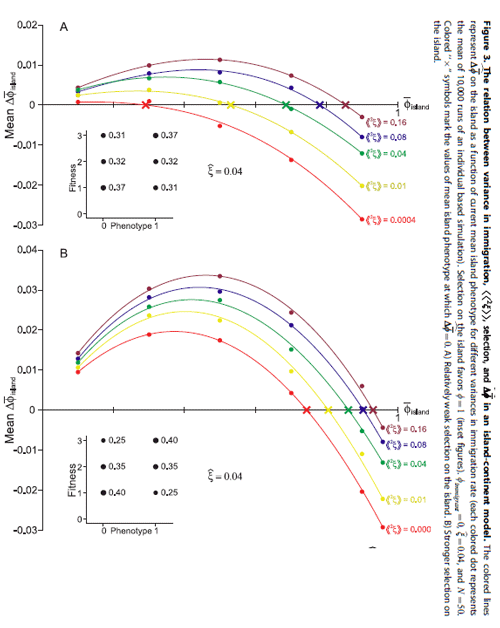 Panel A represents "weak selection" for the local phenotype and panel B represents "strong selection." The X-axis represent the mean phenotypic value on the island (interval 0-1, 0 being the value of the migrants, while 1 is what the selection on the island favors). The Y-axis represents the change in mean trait value assuming a particular parameter of selection (which is fixed) as well as migration, which tends to work against selection. Additionally, remember that as mean trait value approaches an optimum the rate of evolutionary change often tends to slow as per Fisher's adaptive geometry. The curves show the change in mean phenotypic value assuming a given mean phenotypic value driven by selection, with variance in migration fixed. The variance in migration is shown in descending value on the curves. Remember that the migrants have a value of 0, so they are working against selection, and will prevent the local island favored phenotype, 1, from fixing, assuming that migration is an indefinitely persisting condition. Though the mean rate of migration is the same on all the curves, it is clear that if the variance of that migration increases the efficacy of that process in counteracting selection in generating local adaptation is sharply reduced. This sort of insight has clear biological relevance in terms of a world where many species exhibit population substructure, as well as complex dynamics of gene flow and population size variance. The paper also explores other issues, such as asymmetrical gene flow, correlated rates of gene flow, migration into populations which are expanding, etc. It seems that a general finding is that conventional analytic population genetic models probably overestimate the power of migration to homogenize allele frequencies across populations and countervail local adaptations. To be frank in a world where so much data is being generated via genomics I'm not sure the primary focus need necessarily be more complex analytic models. Additionally, I thought most population geneticists assumed that the assumptions that they made for migration parameters did exaggerate its effect within their models. I'll let the paper finish:

... Most model building in biology involves either special case analytical models or simulation models. Analytical models have the advantage of providing mechanistic insight into the processes involved, but often force us to make particular simplifying assumptions for the sake of mathematical tractability, and this can render some important processes hard to model. Simulations allow us to investigate a wider range of processes, but still require many unrealistic assumptions in order to narrow the range of parameter values that need to be investigated. Furthermore, simulations tell us only what could happen within the range of parameter values investigated - they do not yield mechanistic insight into why the system behaves as it does. Though special case analytical models and simulations appear to deal differently with assumptions, in one sense they are similar: In both cases we start out by identifying the processes we think are important, then make appropriate simplifying assumptions to allow us to study these. In building an axiomatic theory, on the other hand, we start out with what we think is actually true about the system in question, then derive from this the mathematical rules that tell us what processes are important under what circumstances. The scientific axioms from which Equations 5 and 6 follow are simply that organisms live in populations, have measurable phenotypes, leave descendants, and that we can in principle assign probability distributions to individual fitness, offspring phenotype, and immigration and emigration rates. Not surprisingly, the resulting equations have many terms, most of which can themselves be expanded to yield even more terms. In traditional model building this would be a drawback - all those terms complicating the interpretation of the model. For an axiomatic theory, though, this proliferation of terms is exactly what we want. Because we started out with only assumptions that we have good reason to think are actually true, each of the resulting terms must correspond to some real biological process - including some that we might never have thought of....