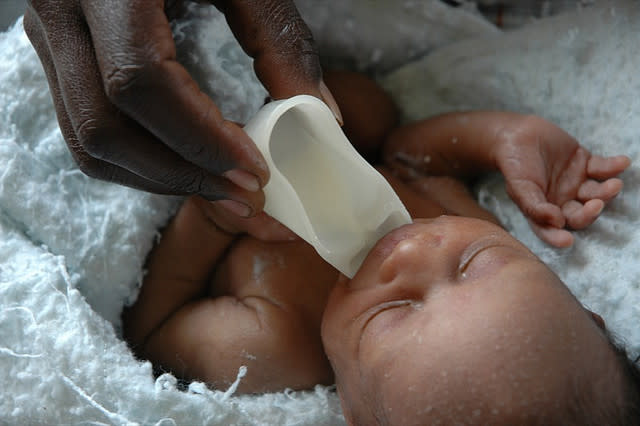 Mothers with HIV risk passing the virus to their babies through breast milk, but now a study shows that the greatest risk of passing on the virus isn't correlated with the length of time a mother breastfeeds, but with the weaning period itself. When a mother has HIV, the chance of spreading that virus to her baby through breast milk is usually about 10 to 15 percent. If breastfeeding puts the baby at risk, one might assume that not breastfeeding would be the best solution. But breast milk also contains components that boost babies' immune systems and help them fight off infections. In sub-Saharan Africa, where infectious diseases are widespread and often life-threatening, breastfeeding becomes especially important for the health of babies. The question, then, is not if a mother should breastfeed, but how and when. Researchers studied a group of 958 HIV-1-positive women in Zambia who did not have access to antiretroviral treatment. The scientists guided the women's breastfeeding habits over the course of two years to see the effects of weaning the babies on the amount of HIV-1 present in their breast milk, and published their results in Science Translational Medicine today. All participating women were encouraged to breastfeed for the first four months of their babies' lives. After four months, the researchers tested the participants' breast milk to see how many copies of the virus it contained. The virus levels in the women's breast milk were pretty even across the board. Then the researchers had half the women stop breastfeeding and the other half continue. Two weeks later, the researchers again tested the milk of all participants, but this time the results showed some major differences between the groups. The women who stopped breastfeeding at four months had an average of 2,708 copies of the virus per milliliter of their milk (as measured by viral RNA). Women who continued to do some breastfeeding but also gave their babies other liquid or solid foods had an average of 293 copies of the virus per milliliter. The women who breastfed exclusively had the lowest concentration of the virus, with only 50 copies per milliliter on average. Throughout the study, the researchers also tested the babies to see if and when they contracted HIV. In correlation with the higher concentration of the virus in their mothers' breast milk, those babies who had been weaned at four months also showed a higher than expected transmission rate for the disease. This challenges the prior assumption that the longer a woman breastfeeds her baby, the greater the baby's window of exposure to the virus, and the greater the risk of the mother passing on HIV. The researchers say it's actually less about the duration of breastfeeding and more about the weaning process. Concentrations of the virus go up dramatically during the weaning period, which makes it an especially risky time for transmission. The authors recommend that HIV-infected women who want to breastfeed should do so exclusively (no feeding with other fluids or foods) for the first six months of a baby’s life. Antiretroviral drug treatments, they say, are especially important for the baby while weaning. After that, mothers should pump and discard excess breast milk to relieve the pressure of swollen breasts and prevent diseases like mastitis without putting the infant at greater risk of getting HIV. Image courtesy of kburgert/Flickr