We stand on the shoulders of cultural giants

In reading The cultural niche: Why social learning is essential for human adaptation in PNAS I couldn't help but think back to a conversation I had with a few old friends in Evanston in 2003. They were graduate students in mathematics at Northwestern, and at one point one of them expressed some serious frustration at the fact that so many of the science and business students in his introductory calculus courses simply wanted to "learn" a disparate set of techniques, rather than understand calculus. The reality of course is that the vast majority of people who ever encounter calculus aim to learn it for reasons of utility, not so that they can grok the fundamental theorem of calculus. With the proliferation of tools such as Mathematica and powerful portable calculators fewer and fewer people are getting their hands dirty with calculus in an analytic sense, and more often see it as simply a "requirement" which they have to pass. Calculus, and mathematics generally, is a clean and crisp human invention. In the late 17th century Isaac Newton and Gottfried Leibniz originated calculus as we understand it. Later thinkers extended their work. But for the vast majority of humans who have ever learned calculus it is simply a "black box" set of techniques which work rather magically. They did not contribute anything new to the body of knowledge which they drew upon. Mathematics is part of our cultural patrimony, we implicitly stand upon the shoulders of giants without apology. Such is to be human. In a The cultural niche Robert Boyd, Peter J. Richerson, and Joseph Henrich sketch out the broad thesis about the nature of human culture which is explored in more depth in works such as Not by Genes Alone and The Origin and Evolution of Cultures. Though the subject which they tackle is vast, the powers of precise description and crisp inference can sometimes lead to surprising conclusions:

In the last 60,000 y humans have expanded across the globe and now occupy a wider range than any other terrestrial species. Our ability to successfully adapt to such a diverse range of habitats is often explained in terms of our cognitive ability. Humans have relatively bigger brains and more computing power than other animals, and this allows us to figure out how to live in a wide range of environments. Here we argue that humans may be smarter than other creatures, but none of us is nearly smart enough to acquire all of the information necessary to survive in any single habitat. In even the simplest foraging societies, people depend on a vast array of tools, detailed bodies of local knowledge, and complex social arrangements and often do not understand why these tools, beliefs, and behaviors are adaptive. We owe our success to our uniquely developed ability to learn from others. This capacity enables humans to gradually accumulate information across generations and develop well-adapted tools, beliefs, and practices that are too complex for any single individual to invent during their lifetime.

The authors use examples of foraging societies which have "lost" knowledge through population crashes to illustrate the collective nature of human knowledge. It is reputedly an African proverb that "when an old man dies a library burns." This was certainly the case when a particular group of Greenland Inuit experienced a population collapse which impacted their older cohorts to the point where they all expired before passing on their knowledge and skills. The community forgot the techniques of hunting caribou or making kayaks! The younger individuals who survived understood that these were possibilities, but none of them had the suite of skills necessary to replicate the abilities of past generations. Let's use a more contemporary example. Imagine you had hand 200 business students who had completed a term of differential calculus. Now give them a year to infer what they would have learned in integral calculus. I'm not sure even with a knowledge of differential calculus that a random set of 200 business students would be able to derive much of integral calculus. Part of the issue here is that often students who must take mathematics, but are not of a mathematical bent themselves, have no "big picture" grasp, but master a set of discrete techniques. They solve problems of a specific form, but are not able to improvise anew from first principles, because they're rarely asked to do such things. As humans we always take for granted an enormous store of cultural knowledge, which we absorb both implicitly and explicitly. We are adapted to be cultural creatures. This is why the authors posit the "cultural niche" rather than "cognitive niche" hypothesis in terms of the transmission of sets of ideas. The cognitive niche hypothesis emphasizes the individual competencies of humans. We have relatively advanced general intelligence aptitudes, and we are master imitators. Therefore, once an innovation occurs, instead of reinventing the wheel, humans replicate. This is far cheaper than the act of invention. A sequential and synergistic set of imitations can then lead to a ratchet effect of cultural evolution, as beneficial memes sweep through populations. But there is a problem with this thesis: imitation can be viewed as a "free rider" strategy. Why think for yourself when you can let others do the heavy lifting for you! Don't worry about the large menu, just have what "he's having." The problem is that this cheap and effective strategy is liable to spread, and over time more and more imitators anchor on upon a few keystone innovators. These hard working de facto altruists though eventually become not keystones, but weak links. If one of them is gifted not with prudence and intellect, but arrogance and blindness, then a whole population can find itself hurtling over the cliff. Imitation is the root of irrational herds and chaotic mass social behavior. What's the solution to this? Naturally it is not a fixation upon a given strategy, but a facultative flexibility in learning from others. We don't just imitate anyone, we imitate prestigious and successful individuals. Ergo, endorsements by sporting figures of seemingly unrelated products. And the nature of the environment impacts how liable we are to imitate or innovate. In a world subject to stasis the cost of individual innovation has few upsides. Best to simply do as "the ancestors did." Collective cultural memory plays a critical role in passing down "best practices." But sometimes this can become maladaptive when circumstances change. European peasants resisted the attempts by their rulers to promote the cultivation of potato for centuries because of its resemblance to nightshade. There was a deep-seated custom, which resulted in generations of suspicion which had to be overcome. Today the potato is a "customary" and "traditional" crop in many of these societies. Conservatism had its costs, as another food crop may have buffered famines in France and Russia. An implication of this broader dynamic might be that environments which change more will have less pressure to enforce imitative conformity. I suspect that the protean social and technological milieu of the developed world does fit this description. "Doing your own thing" makes good sense when traditions and customs can never take hold because the background conditions of your environment are always in flux. Instead of vertical transmission of collective memory over time you see horizontal sweeps of fads and fashions across sets of peers, with each set of norms being overturned in rapid succession by that of the next cohort. 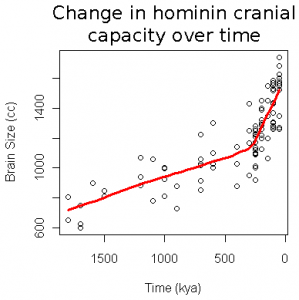 But let's go back to the beginning: what does culture have to do with human evolution? The figure to the left was generated by Luke Jostins using hominin data sets. By this, I mean individuals who are not anatomically or behaviorally modern humans before ~200,000 years before the present at the outer limit. The story told above leans heavily on the "standard model" of recent human evolution, whereby modern humans arose ~50,000 years ago in Africa, and swept like wildfire around the world. The reason that modern humans conquered all before them is laid out explicitly in the paper:

we are an incredibly flexible cultural creature.

And because of the demands of culture you see a rapid encephalization of cranial capacities over the last "500,000" years. From Luke's data it looks like actually it was more the last ~250,000 years, before which there was a more gentle ascent upwards. In any case, we may also be living through a revision of the old model of recent human origins. The details are yet to be written, but it looks like the story is going to be a little more complex and multi-layered that one East African tribe of African Eve exploding outward from its ancestral territory. But the way I see it that only makes the idea of human adaptation to a cultural environment more plausible. Instead of a singular mutation ~50,000 years ago conferring the ability to speak, as Richard Klein would have it, it may have been a co-evolutionary process where the brain and culture operated in tandem, ratcheting toward modernity step by step. Still, one would have to revise the thesis that this is the hallmark of a sui generis behaviorally modern human lineage. Neandertals, for example, seem to have been subject to the same long term dynamics of encephalization.... Citation: