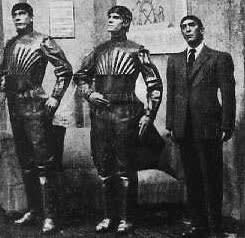 We are haunted by Hamilton. William D. Hamilton

specifically, an evolutionary biologist who died before his time in 2000. We are haunted because debates about his ideas are still roiling the intellectual world over a decade after his passing. Last summer there was an enormous controversy over a paper which purported to refute the relevance of standard kin selection theory

. You can find out more about the debate in this Boston Globe

article, Where does good come from?

If you peruse the blogosphere you'll get a more one-sided treatment. So fair warning (I probably agree more with the loud side which dominates the blogosphere for what it's worth on the science). What was Hamilton's big idea? In short he proposed to tackle the problem of altruism in social organisms. The biographical back story here is very rich. You can hear that story from the "horse's mouth" in the autobiographical sketches which Hamilton wrote up for his series of books of collected papers, Narrow Roads of Gene Land: Evolution of Social Behaviour

and Narrow Roads of Gene Land: Evolution of Sex

. For the purposes of the issue at hand the first volume is obviously more important, but the second volume has an enormous amount of personally illuminating material because of Hamilton's untimely passing in 2000 before it could be edited. In Ullica Segerstrale's Defenders of the Truth

and Oren Harman's The Price of Altruism

Hamilton looms large as a major secondary character in the narrative. The Altruism Equation

, A Reason for Everything

, and The Darwin Wars

, all give him extensive treatment, both his scientific ideas and relevant biographical context. Hamilton's scientific influence on Richard Dawkins was enormous. There are nearly fifty references to him in both The Selfish Gene

and The Extended Phenotype

. In writing his obituary

Dawkins began: "W. D. Hamilton is a good candidate for the title of most distinguished Darwinian since Darwin."

In terms of the details of his science, Hamilton proposed that genetic relatedness between individuals can explain altruism within groups. In this way Hamilton reduced a phenomenon which had often been explained as a group-level one (e.g., "for the good of the species") to an individual-level one (e.g., "for the good of the individual/gene"). According to Hamilton when he was a young scientist in the early 1960s most people did not perceive this problem to be a problem at all, and he had difficulty finding support for this line of research, and was in fact warned off it by his superiors. The end culmination of those early years of lonely introspection were two dense, abstruse, and difficult papers (in part due to their peculiar notation), The genetical evolution of social behaviour – I

and The genetical evolution of social behaviour – II

But the basic heuristic at the heart of these papers was condensed earlier in a short essay in The American Naturalist as Hamilton's Rule:

rB > C or rB - C > 0 Where in the context of an altruistic act across two individuals: r = genetic relatedness between them C = cost to the individual performing the act B = benefit to another individual who is the recipient of the act What the above equation is stating is that when the benefit multiplied by the genetic relatedness exceeds the cost, that is, it is greater than zero, the behavior will spread through natural selection. In contrast, when the cost is greater than the benefit multiplied by the genetic relatedness the behavior will be disfavored. Here's a "toy" illustration. Imagine a gene, G, in two variants, G1 and G2. The "ancestral" "wild type" is G1, while G2 is an allele which induces altruistic behavior toward nearby con-specifics. Assume that nearby con-specifics are likely to be genetically close, perhaps siblings. The altruistic behavior induces a cost at no benefit to the individual which is engaging in altruism, but it results in a benefit at no cost to the individual which is a recipient of the act. But here's the key:

nearby kin are much more likely to have the altruistim conferring allele, so G2 is likely increasing its own fitness because recipients of the altruistic behavior may also carry G2.

Obviously the details matter here in evaluating exactly whether altruism spreads. What is the magnitude of the cost? What is the magnitude of the benefit? What is the extent of relatedness measured against a basal expectation? There are also some presuppositions within the original theoretical framework of altruism evolving because of gains to inclusive fitness. Hamilton assumed weak selection, additivity of costs and benefits of fitness components, as well as a specific way to frame genetic relatedness. It has long been a question how robust the Hamiltonian framework is to deviations from its assumptions, deviations which are likely to occur empirically. But empirically measuring fitness in the wild as well as genetic relatedness was either impossible or difficult. So how to get around this? A new paper was published in PLoS Biology does just that with literal a toy model of robots controlled by a simple neural network. The robots seem to mimic foraging behavior, which impacts their fitness in relation to how they replicate their digital genome to the next generation. Remember, Hamilton's model was very theoretical, so even if there are literal artificialities here it is still an interesting empirical example which moves us closer to concrete reality. A Quantitative Test of Hamilton's Rule for the Evolution of Altruism

One of the enduring puzzles in biology and the social sciences is the origin and persistence of altruism, whereby a behavior benefiting another individual incurs a direct cost for the individual performing the altruistic action. This apparent paradox was resolved by Hamilton's theory, known as kin selection, which states that individuals can transmit copies of their own genes not only directly through their own reproduction but also indirectly by favoring the reproduction of kin, such as siblings or cousins. While many studies have provided qualitative support for kin selection theory, quantitative tests have not yet been possible due to the difficulty of quantifying the costs and benefits of helping acts. In this study, we conduct simulations with the help of a simulated system of foraging robots to manipulate the costs and benefits of altruism and determine the conditions under which altruism evolves. By conducting experimental evolution over hundreds of generations of selection in populations with different costs and benefits of altruistic behavior, we show that kin selection theory always accurately predicts the minimum relatedness necessary for altruism to evolve. This high accuracy is remarkable given the presence of pleiotropic and epistatic effects, as well as mutations with strong effects on behavior and fitness. In addition to providing a quantitative test of kin selection theory in a system with a complex mapping between genotype and phenotype, this study reveals that a fundamental principle of natural selection also applies to synthetic organisms when these have heritable properties.

The science at the heart of this paper isn't too knotty. There wasn't a complicated novel derivation or forbidding statistical model.

Rather, the authors ingeniously managed to test experimentally the simple insights of the Hamiltonian framework.

The results were surprisingly unsurprising. I reedited the panels below, but they show the consistency of the basic results.

Keep in mind that the replicates varied r, B, and C. 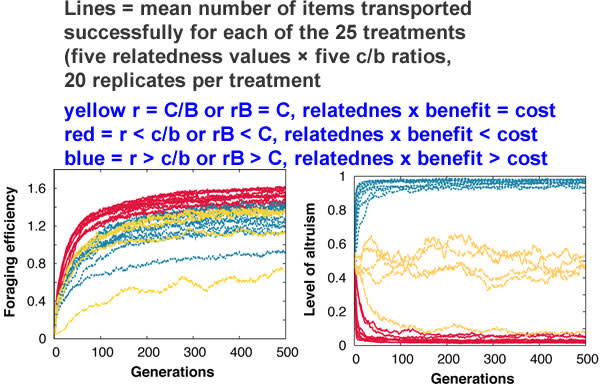 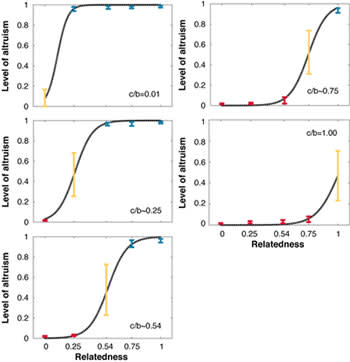 Not to be too cute, but the robots followed Hamilton's Rule in a robotic fashion! When the cost was too great altruism was disfavored and when the benefit was great enough altruism was favored. In a situation of balance there was the sort of stochastic fluctuation about the initial condition you'd expect. One thing to remember is that the authors simulated mutation and recombination, so selection wasn't the only evolutionary parameter at work. The panel to the left shows how the level of altruism varied as a function of relatedness, with the ratio between cost and benefit held constant. The top left panel shows a situation where c/b = 0.01. That means that the benefit to the recipient is 100 times greater than the cost to the altruist. Even at low levels of relatedness the altruism spreads. As the ratio between cost and benefit converges upon 1, where the cost now equals the benefit, the relatedness threshold for a given level of mean altruism across these groups increases. This is all as you'd expect, boringly thrilling to see a simple model validated. The authors also tested the impact of switching to a mutation of large effect (so not weak selection) as well as epistatic gene-gene interactions (so introducing nonlinearities which deviate from the assumption of additivity). Basically they seem to have found that both of these impacted behavior and fitness, but not the ultimate outcome. I'll quote, because honestly I'd have liked to see more of this in the paper, but that's probably for the future:

, we conducted additional experiments at the last generation in two treatments with intermediate r and c/b values

But in the discussion, they note:

Despite the fact that the assumptions mentioned above were not fulfilled, Hamilton's original 1964 rule always accurately predicted the conditions under which altruism evolved in our system. Whatever the c/b value used, altruism always evolved in populations where r was greater than c/b. This finding is important given that the assumption of weak selection, additivity of costs and benefits of fitness components and absence of pleiotropic and epistatic gene interactions are also likely to be violated in real organisms that also have a complex mapping between genomes and phenotypes.

The likely power of this sort of inclusive fitness does not in my book invalidate other forces which shape social behavior such as reciprocal altruism. Nature is one, how we carve it at its joints is our business. Hopefully we'll see a lot more tests of social behavior using robots in the future. And, with the rise of cheap typing of individual identity with genotyping there is the possibility for better assessments of relatedness and fitness across generations in nature itself. Citation: