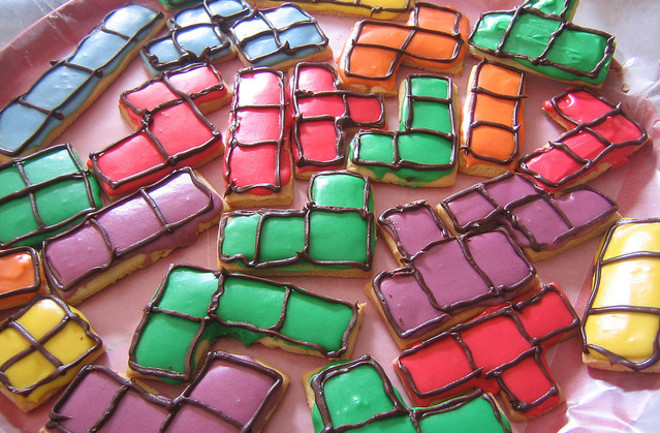 Photo:flickr/andromacheIf you've ever tried to lose weight, you probably know the evil that is the craving. It can strike anytime, is really hard to ignore, and can leave you with a bigger butt than you started with. But what if there were a simple way to drown out the craving -- one that was actually enjoyable? Well, these scientists are here to grant your very wish! They waited until participants were struck with cravings and told them to play Tetris. And behold! Those who played that oh-so-seductive game experienced reduced cravings compared to their pitiable controls, who were stuck with a "Game Loading" screen.Playing 'Tetris' reduces the strength, frequency and vividness of naturally occurring cravings. "Elaborated Intrusion Theory (EI) postulates that imagery is central to craving, therefore a visually based task should decrease craving and craving imagery. This study provides the first laboratory test of this hypothesis in naturally occurring, rather than artificially induced, cravings. Participants reported if they were experiencing a craving and rated the strength, vividness and intrusiveness of their craving. They then either played 'Tetris' or they waited for a computer program to load (they were told it would load, but it was designed not to). Before task completion, craving scores between conditions did not differ; after, however, participants who had played 'Tetris' had significantly lower craving and less vivid craving imagery. The findings support EI theory, showing that a visuospatial working memory load reduces naturally occurring cravings, and that Tetris might be a useful task for tackling cravings outside the laboratory. Methodologically, the findings show that craving can be studied in the laboratory without using craving induction procedures." Related content: NCBI ROFL: How scaring small children can help you lose weight. NCBI ROFL: Study proves masturbation leads to weight loss. NCBI ROFL: New weight loss plan: drink crappy wine.