Want to eat less snack food? Use a red plate. 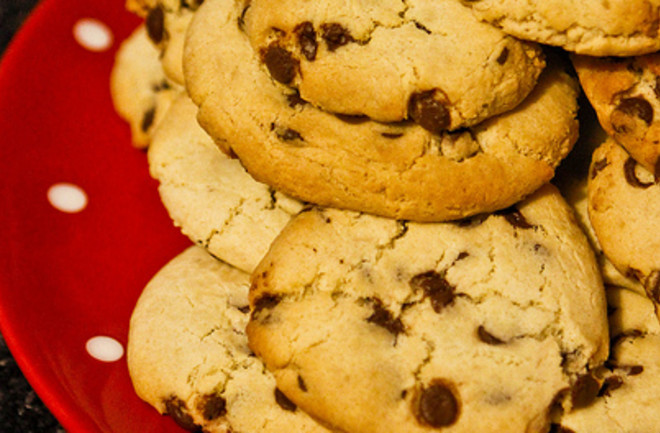 Photo: flickr/Nina MatthewsIt's Red Hot Science Week here at Seriously, Science? This week we will be giving the red-carpet treatment to science that focuses on the color red, until we are red in the face. And if all of these puns are making you see red, or raising a red flag, feel free to pin a scarlet letter on us because, well, we've been caught red-handed. Red!The color red reduces snack food and soft drink intake. "Based on evidence that the color red elicits avoidance motivation across contexts, two studies investigated the effect of the color red on snack food and soft drink consumption. In line with our hypothesis, participants drank less from a red labeled cup than from a blue labeled cup (Study 1), and ate less snack food from a red plate than from a blue or white plate (Study 2). The results suggest that red functions as a subtle stop signal that works outside of focused awareness and thereby reduces incidental food and drink intake." Bonus quote from the materials and methods: "The study was set up in a booth where information about psychology was displayed. Visitors were invited to take part in a study related to “various areas of psychology”. If they agreed they were given a stack of questionnaires, unrelated to the present purpose, and seated at a table where the experimenter had previously placed a paper plate containing exactly 10 pretzels. Depending on the experimental condition, the background color of the pretzel plate was white, red or blue. Participants were invited to feel free to snack while they filled in the questionnaire. At the end of the questionnaire, participants were asked to evaluate the pretzels (“How much did you like the taste of the pretzels?”) on a 7-point scale (1 = not at all; 9 = very much) and to indicate the time of their last meal. After completion of the questionnaires, participants were told that the experiment was now over, probed for suspicions, debriefed and dismissed. Finally, the experimenter noted the number of eaten pretzels for each participant."

Related content: Discoblog: NCBI ROFL: Do nachos count as a meal? Depends on which college student you ask.