Vulcans through the eye of the bottleneck 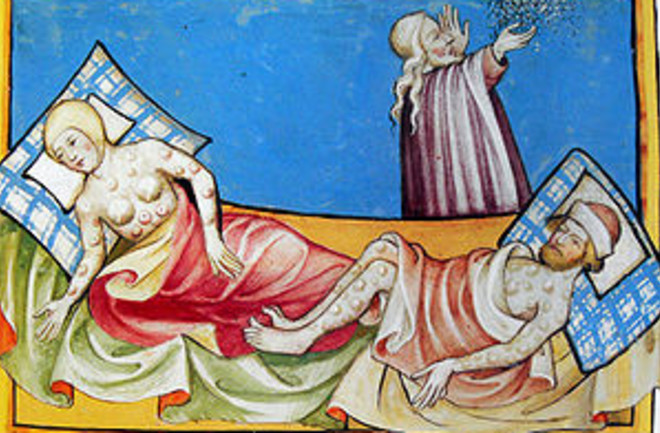 The Black Death I noticed during Peter Ralph and Graham Coop's Ask Me Anything about their new paper, The Geography of Recent Genetic Ancestry across Europe, someone brought up the effects of plague. Recall that ~1/3 of Europe's population died during the Black Death. And population size reductions on the order of ~50% due to epidemics are not unknown in human history. Surely this would have a major genetic effect? Well, in fact it would have a genetic effect due to possible adaptations to disease (see CCR5). But there would be little overall impact on genetic diversity, at least in the short term. That is because for bottlenecks to produce major change in the genetic character of a population they have to be rather extreme in magnitude. This issue came to mind for me in 2009 when I watched Stark Trek. If you haven't watched the J. J. Abrams reboot, and are a spoilerphobe, read no more! Now, with that out of the way you may recall that during this film the Vulcans suffered a genocidal attack. Out of billions of Vulcans only ~10,000 survived. Here's some commentary on the possible consequences, New Star Trek Movie: A Vulcan Holocaust?:

Yes, there is a remnant of ten thousand Vulcans left. At the end of the movie, we are told that they have found a new planet to settle on. Still, we must ask: If we are now in a new timeline and all we have left are a few thousand survivors, will the Vulcans have any political influence at all? Or will they just become a relic on a museum planet? Spock even refers to his people as an endangered species. ... It would seem the Vulcans will have no other choice but to accept "converts" if they want to survive, because 10,000 is not really a very big gene pool in the long haul. The Amish, who do not accept converts or newcomers, have become very inbred and are now facing problems with genetic diseases. European Jews, who lived in isolated communities for many centuries, also carry certain genetic diseases. However, the recent influx of Jews by Choice is bringing new DNA patterns into the community, so that Jews have fewer such problems than the Amish.

3.5% growth per year First things first. Vulcans would have no problem reestablishing their population on a virgin planet. It's simply the power of exponential growth. The nation of East Timor has a growth rate of 3.5% per year (total fertility rate ~6 per woman). This is not an outlandish value. The Puritans of New England maintained higher fertility for several generations. The key here is that humans (or humanoids) are like any organism when faced with a Malthusian surfeit: they breed. Though Vulcans live longer than humans, and have some life history quirks, I'm rather confident that Vulcans could reproduce at least as fast as humans. The reality is that they're superior to humankind in almost every way possible (their lack of emotions is a testament to culture, not biology). Some quick computations tell me that it would take 400 years for Vulcans to get back to a population of 10 billion. Since some Vulcans can live longer than two centuries, this seems like a rather short window of time. But what about the second clause? Vulcan genetic diversity. Vulcans are logical, so I'm rather confident that they would have sampled diverse populations when evacuating. And to my knowledge I am not aware of an ethnic skew of Vulcans who were resident across the Federation. So with concerns of representativeness addressed, what would such a crash in population entail? First you need to become familiar with the concept of an effective population, Ne. Consider that in any given generation some individuals shall breed and some shall not. Though the count of population may be x, the count of those who contribute to the next generation is invariably (x - those who do not breed). And it is this inter-generational transfer which is relevant to population genetics. Also, for the purposes of genetics deep history matters a great deal. Bottlenecks have an inordinate impact on the long term effective population. Intuitively, consider the case of a large population which goes through an extreme bottleneck, and then expands again. The average census size over that time might be rather substantial. But for genetic purposes the lineages are likely to coalesce back to a few common ancestors at the bottleneck. The impact of the pre-bottleneck period is attenuated, because much of the population was simply not genetically sampled. It may as well have not existed! To make it concrete, below is a toy example. Imagine an island with 10,000 individuals which undergoes population crashes. You see the results below.

The total number of individuals over the 30 generations across the three scenarios is about the same. But the long term effective population in the scenario where the size dropped to 10 is 30 times smaller than the case where the size was reduced to 10% of the prior value. But what does this do to genetics? There are complicated ways to model this, because populations may be in mutation/drift/selection equilibrium, with the bottleneck being a temporary perturbation. But one way to think about the issue is that a bottleneck can drop heterozygosity by about a factor of 1-1/(2Ne). As Ne → ∞ there is no change. But 1-1/(2Ne), where Ne is 1,000 to 10,000 (assuming that Ne is smaller than the census size of 10,000), is not implying a great change in heterozygosity. Of course many rare alleles, or alleles private to families, will be lost. But so long as the Vulcan population was reasonably representative (not inbred), then I think they don't have much to fret about in terms of genetic health. The purpose of this post was not to answer a question of deep interest to Trekkies. Rather, it was to encourage people to establish some intuitions about these sorts of demographic processes and their effect upon genetics. References: Hartl, Daniel L., and Andrew G. Clark. Principles of population genetics. Vol. 116. Sunderland: Sinauer associates, 1997. Nei, Masatoshi, Takeo Maruyama, and Ranajit Chakraborty. "The bottleneck effect and genetic variability in populations." Evolution (1975): 1-10.