I have mentioned before the current fad in vitamin D related papers in the medical literature. It's also broken into the pop culture Zeitgeist as well, I regularly get forwards on the topic. Here is a Google Trends chart for the United States:

The history of medicine is, unfortunately, rather similar to the history of astrology. In fact for much of history doctors are likely to have increased, rather than decreased, mortality, thanks to an ignorance of germ theory and false paradigms such as Humorism. The demand-side pressures for cures & prevention seems to still exert a powerful push toward the rise & fall of fads (see google trends for "low carb" for example). A difference between pre-modern and contemporary fads though is that they're not all capricious today. Unfortunately though medicine is still complex, and the demand-side pressures often require an Answer. You have rafts of correlational studies, with each correlation adding to a positive feedback loop until the fad crests, and a new "it-cure" emerges on the scene (and no surprise that the beer industry is supposedly behind some of the studies which show that drinking in moderation is correlated with greater life expectancy). All this is why papers like this are important, Vitamin D controls T cell antigen receptor signaling and activation of human T cells:

Phospholipase C (PLC) isozymes are key signaling proteins downstream of many extracellular stimuli. Here we show that naive human T cells had very low expression of PLC-γ1 and that this correlated with low T cell antigen receptor (TCR) responsiveness in naive T cells. However, TCR triggering led to an upregulation of ~75-fold in PLC-γ1 expression, which correlated with greater TCR responsiveness. Induction of PLC-γ1 was dependent on vitamin D and expression of the vitamin D receptor (VDR).Naive T cells did not express VDR, but VDR expression was induced by TCR signaling via the alternative mitogen-activated protein kinase p38 pathway. Thus, initial TCR signaling via p38 leads to successive induction of VDR and PLC-γ1, which are required for subsequent classical TCR signaling and T cell activation.

ScienceDaily has a good summary. This schematic represents the biochemical steps: 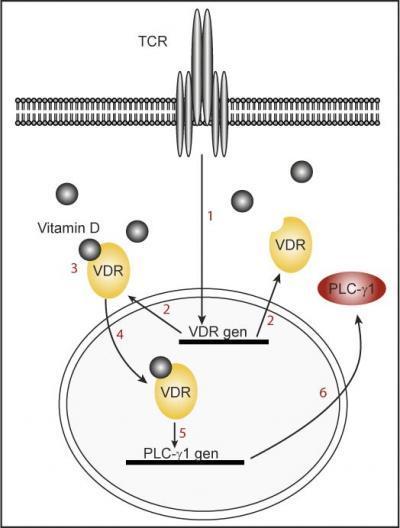 Update: Another datum that vitamin D is "hot," already retweeted 10 times in 2 hours.