Vital Signs: A 20-Pound, Bony Tumor That Nearly Suffocated a Man From the Inside

The huge growth was filling part of Hector’s chest and crushing his left lung. If surgeons couldn’t remove it, and fast, he would not live for long. 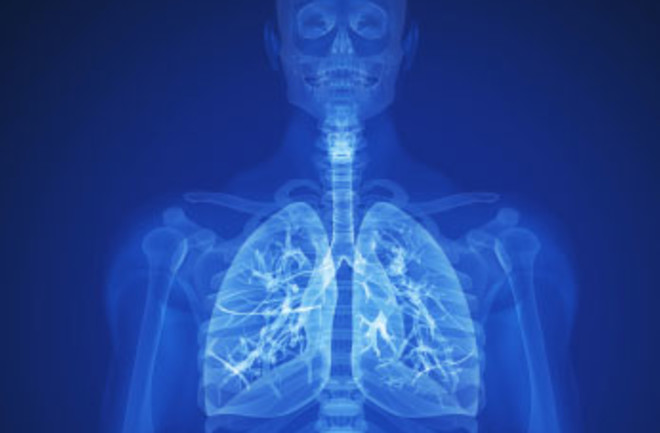 One of my junior surgical partners, Scott, called me from the clinic downstairs. “Hey, would you mind coming down?” he asked. “I haven’t seen anything like this before.” I had never heard Scott so anxious, and told him I would be right there.

He met me at the exam room door, wide-eyed, holding the patient’s chart in one hand and nervously slapping it into his other palm. “This is wild,” he murmured. “A 40-year-old man with bony masses in several areas of his body—hips, face, everywhere. He has one in his chest that we might need to deal with, and soon. This guy is literally suffocating.”

We walked over to a computer to take a look at the CT scan.

The scan showed a complex bony tumor originating at the ribs and completely filling the left chest. The patient’s heart, which would normally rest next to the left lung, was pushed completely against the right lung, compressing it to about half its normal size. And something vital was missing from the scan.

“Have you had a chance to review his medical history?”

We opened up the electronic medical record. The patient’s name was Hector, and his life had been full of suffering. Since childhood he’d had multiple operations related to these tumors, including removal of his left eye, as well as other cranio­facial, hip, and lower-extremity procedures.

Doctors had given him a diagnosis of fibrous dysplasia. This random, or non-inherited, genetic disease involves a mutation in a gene that codes for a protein called Gs, which regulates bone growth. When mutated, the gene causes Gs to go into overdrive, leading to abnormal growth and function of the cells that create bone.

Scott suggested that he and I see the patient together.

We walked down the hall to the clinic exam room and found Hector accompanied by eight women: sisters, cousins, and aunts. My guess was that the average height of the women was at best somewhere around four foot ten, and Hector was about six foot seven. His head was one and a half times normal size, and severely misshapen. He wore a baseball cap that was about four sizes too small. He had a prosthetic left eye and stood with a stoop, his unusually large hands grasping the handlebar of a walker. He was wearing a nasal cannula—plastic tubing running from an oxygen tank to his nose—and gasped for several seconds each time he spoke.

Polyostotic (literally, “many bones”) fibrous dysplasia with endocrine abnormalities is known as McCune-Albright syndrome. While the isolated form of fibrous dysplasia, affecting just one bone or area, occurs in about 20,000 patients in the United States, McCune-Albright affects only 1,000 or so. Hector met the criteria for the syndrome, with diffuse bony masses and acromegaly, an endocrine disorder related to the overproduction of growth hormone, leading to increased height and enlargement of the hands and facial bones.

After introductions, I asked him why he had come to see us now.

“I wanted to know if you could help me,” he replied. “I’ve been fighting this since I was a little boy—first the operations, and then folks making fun of me.” He stopped, tears welling up in his eyes. “I can’t get around, doc, and my breathing is really bad.” He wiped the tears from his eyes with the back of one of his giant hands. “I want to do normal things, like coach baseball.”

“This is going to get worse,” I said.

“What are my options, doc?”

“Removing the mass in your chest is the only chance of getting better,” I responded, “but first we need to test your lungs.”

When we found that Hector’s overall lung function was only about 12 percent of normal, Scott and I met to discuss our next step.

“I don’t think he’ll survive the surgery,” Scott said. “Just removing the bony tumor will not be enough. He needs more lung tissue.”

“I’ve operated on patients with bullous disease,” I replied, “and this might be similar.”

In bullous disease, an area of a patient’s lung degenerates from either smoking damage or genetic predisposition, ballooning with air and compressing the adjacent lung tissue over time. When the ballooned area is removed, the normal, compressed lung re-expands.

“This should be the same. Nothing’s wrong with his lung; it’s just been compressed over time by the mass,” I said, trying to sound confident.

“Possibly for decades,” Scott added doubtfully. “What if we remove the tumor and there isn’t any lung there, or what’s there can’t reinflate?”

“Then he won’t survive,” I conceded. Even though Hector’s compromised right lung was functioning, it would not be enough to sustain him through the stress of a major operation, even on a ventilator. He needed both lungs to survive the surgery.

We called Hector and discussed the options. After hearing the risks, he was adamantly against the surgery. But a week later, he changed his mind. “I want to live, but I don’t want to live like this,” he said. “I’ll take my chances, even if they aren’t so good.”

We typically use a patient’s rib cage as a map of sorts. If you open the chest between the third and fourth ribs, for example, you are immediately over the upper heart. If you open between the fifth and sixth, you look right down on the large vessels entering and leaving the lung. Unfortunately, Hector’s third through seventh ribs had fused into a huge, solid, bony mass. Rather than opening between the ribs, we had to use surgical saws to work around the entire mass with the goal of lifting it up like the hood of a car.

Once the rib mass was freed from the surrounding tissues, it had to be separated from the center of Hector’s chest. This was where the lung would be—if there was any left. The size of a watermelon, the tumor mass was too heavy to lift and hold steady away from the vital organs (heart, esophagus, and possibly the lung). We had to employ a hook and crank system attached to the operating room bed, normally reserved for large orthopedic procedures such as hip replacements, to lift and stabilize the tumor. Then I felt underneath it, where I could not yet see, for the lung. “It’s soft tissue,” I said, unconvincingly. “But not much of anything there.”

Luckily, the mass had not penetrated the soft tissues, although it had adhered to them as if glued to the surface. We used an electric knife to separate the mass from tissue, then gradually lifted the tumor out of the chest.

Finally it was free. Scott set it on a scale. “Twenty pounds,” he said. When he walked back to the table, he saw me staring into the empty space. “Well?” he asked.

At the bottom of the chest cavity was some pink flesh, no more than a tenth of an inch thick. I pointed to the pancake-like tissue. “I think this is lung,” I replied, “but there isn’t much.”

I looked up at Scott. “Are we going to try to reinflate it?” he asked.

I turned to the anesthesiologist. No one spoke for several moments. The chest cavity and its thin pink pancake moved gently with the sound of the anesthesia machine—psssstup, psssstup—inflating the right lung.

The breathing tube the anesthesiologist inserts for a lung operation has two channels, one going to each lung. During an operation, one side of the tube is clamped, and the airflow is directed to the lung that isn’t being treated. The channel to what we hoped was the left lung was clamped.

“OK” I said, “unclamp the tube.” The machine delivered several breaths . . . . Nothing.

Suddenly, a couple of small areas popped up, like pink bubblegum bubbles, on the pink tissue. Then a few more. The pancake thickened, and thickened again, and then more bubbles grew and coalesced with others. In three minutes the entire lung had reinflated from a flat, spongy nothing to a complete lung 30 times larger. “It’s working,” the anesthesiologist reported. “Good oxygen exchange from that lung!”

Within a month, Hector was off oxygen and getting around without a walker. Not long after, I caught a glimpse of him on a local television news spot. I was across the room and the television volume was low, but I saw him smiling, surrounded by little boys in baseball caps.

W. Roy Smythe is chairman of surgery for the Texas A&M Health Science Center College of Medicine. The cases described in Vital Signs are real, but names and certain details have been changed.